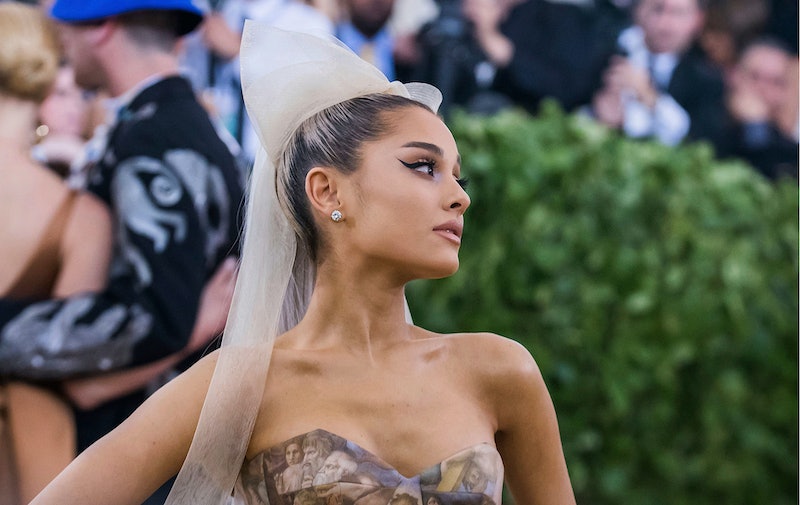 It seemed like everyone was in attendance at the 2019 Grammy Awards — everyone except Ariana Grande. Yes, despite her nominations (and first-ever win for Best Pop Vocal Album), the singer was noticeably absent from the musical event of the year. And while the reasons behind her decision to skip the ceremony have been widely debated, what she would've worn to the event is not up for discussion.

On Sun., singer donned her would-be Grammys gown at home and posted the entire look on Instagram. Grande showcased a custom Zac Posen gown that gave off major Cinderella vibes. In a similar vein as Lady Gaga's Golden Globes masterpiece, Grande's dress was a satin ice-blue dream with a corseted, structured strapless bodice and a full skirt that seemed to go on for days.

The singer paired her dramatic gown with her signature sky-high ponytail and an extravagant-looking, layered diamond necklace. "When @zacposen makes u a custom gown it doesn’t matter if you’re singing or not .... thank u," Grande wrote in a caption for one of the five images she posted on Instagram.

Indeed, she looked ready to get up and go as she twirled around her home in her princess dress (with her sweet pup literally riding on her coattails in one video).

Posen took notice of Grande's at-home red carpet moment and expressed his own appreciation for it. "Major congrats to you on your win. It was my pleasure to make you a gown and you look absolutely beautiful," Posen wrote in the caption of a re-gram of the singer's original image post.

There's no doubt Grande would've made quite the entrance at the musical extravaganza. The last time she graced the award show red carpet was in 2016, where she made a splash in a red Romona Keveža gown. The mermaid gown featured a fitted sweetheart bodice and spaghetti straps. In classic Grande fashion, the overall look was simple but oh-so elegant.

The year prior, the singer donned a sleek, white off-the-shoulder Versace dress with metallic silver accents. The gown featured interesting cutouts on the front and a high slit up the leg, lending some edge to an otherwise classic and simple silhouette.

Grande expressed her excitement in wearing the iconic Italian brand, tweeting: "I think grandps would be very pleased w my dress selections tomorrow. One of his favorite Italian designers! He'll be watchinnnn front cloud."