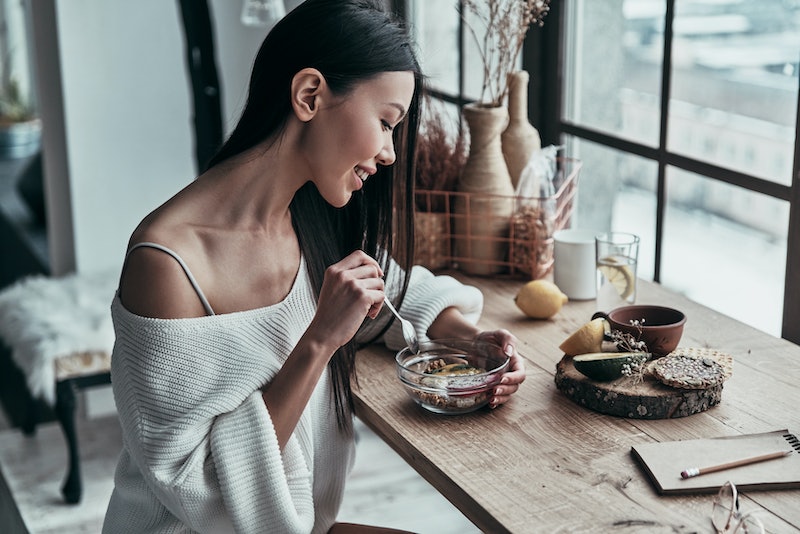 These days, it's easy to get caught up in the seemingly endless fitness and diet trends. And if it's the latter of these that you're focused on, you've probably noticed that lately one is arguably buzzier than the rest: the ketogenic diet. Many A-listers have been vocal about their support of the eating plan — which was originally created to help children with epilepsy — but, as is the case with other fad diets, it's not exactly "one size fits all." Unfortunately a surge in popularity can mean a lot of misinformation. So, are you doing keto wrong? Nutritional experts may be able to help you answer this question.

In case you're not familiar, keto is a dietary plan that's based on high-fat, low-carb eating. "The diet involves a high fat ratio of 75 percent fat to 20 percent proteins and very few carbohydrates — only five percent," explains Los Angeles-based nutritionist Elissa Goodman. "I think the trend appeal of it is high and people are drawn to the fact that they are allowed to have high-fat foods."

And while it may sound relatively simply, author and fitness expert Jennifer Zerling is quick to point out that the keto way of life is actually pretty restrictive. "The ketogenic diet requires people to reduce their daily carbohydrate intake to less than 20 grams per day, which forces the body to use fatty acids as a fuel source instead of glucose," she says. "The body's primary fuel source is glucose since the brain and muscles operate off of glucose. However, when in ketosis, the normal utilization of glucose reserves become insufficient and the body is forced to redirect the energy pathways to break down fat into energy in the absence of glucose."

What makes things even harder is that many food deemed healthy are not included in the keto plan — or that they're only "allowed" in limited amounts. "To keep it in perspective, a person on keto cannot eat a lot of veggies or fruits because those will kick them right out of ketosis," Zerling explains. "Just a half a cup of broccoli is about three grams of carbs, two cups of torn lettuce is two grams, cucumber is four grams, about three grams of carbs in a tomato which is already 12 grams of carbs. So imagine having 12 out of 20 grams of carbs all in one meal? It adds up so quickly, and leaves people with not much to finish their day."

And Zerling also points out that there's no middle ground with this dietary plan — meaning you're either following it exactly, or you're not going to see your desired results. "What people must know is they are either in ketosis or they are out of ketosis," she explains. "There is no in between and there is no going keto 'ish' which I hear all the time." She also adds that anyone with Type 1 diabetes or abnormal insulin function should not attempt eating this way, and that everyone attempting keto should speak to a doctor or professional nutritionist.

Another common mistake people make when attempting keto is choosing the wrong kind of foods. "Some people end up eating significant amounts of red meat and other processed foods, which is extraordinarily unhealthy (and my biggest concern with the diet)," says Goodman. And while the nutritionist tends to be discouraging of any kind of fad diet, she does note that there's a healthier way to go keto. "It does not have to be all about bacon and ranch dressing," she explains. "In fact, I recommend doing a plant-based keto diet free from processed foods."

Zerling agrees, noting that an optimal eating plan involves many foods that are restricted in the keto diet. "Ideally, most folks would simply get back to the basics with eating plenty of vegetables, some fruits (specifically around physical movement and activity), lean proteins, and healthy fats from day to day," she says. "While this may not be keto-friendly, it truly ensures that individuals get their daily phytonutrients and antioxidants from plants while receiving all the benefits that lean proteins and fats offer them."

But, if you insist on trying keto, Zerling explains that not only should you be focused on healthy fats, like fish, nuts, and seeds, you'll also want to stay committed. "In a perfect world, people would integrate the benefits of the ketogenic diet into their overall lifestyle as a long term plan versus short term," she says. "In other words, if one hops on a keto plan, quits and goes back to their former habits, then the keto plan wasn't a success for them. But if that same individual chose to do the keto plan, and then gradually integrate more carbohydrates into their diet based on their activity each day, then they more or less are guaranteed long-term success."

Ahead, find a few keto-friendly — and healthy — foods you can pick up for snacks (in addition to the aforementioned market essentials) if you're exploring the dietary plan.