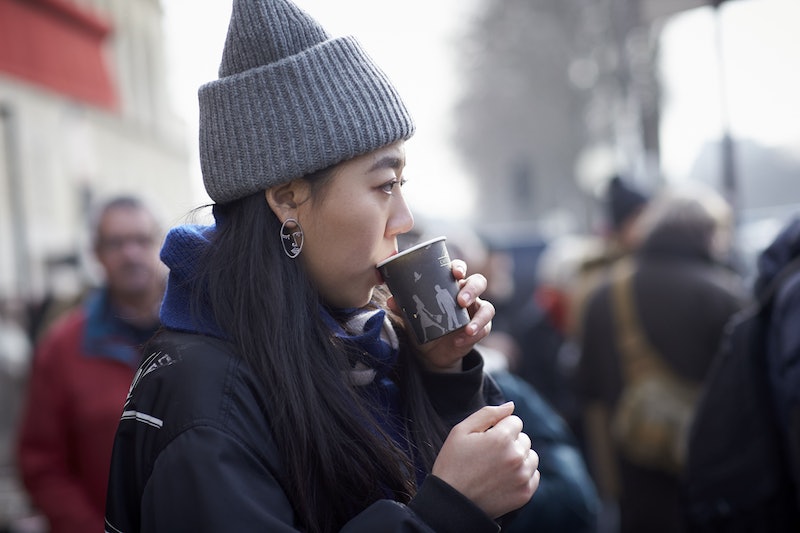 In 2017, kale was all the rage, taking over smoothies and salads everywhere. Last year turmeric-infused concoctions were “in.” This year, there’s truly a fungus among us as adaptogenic mushrooms are dominating the wellness world. Yes, in addition to smoothies and power bowls, mushrooms (and their plethora of benefits) are making their way into coffee, becoming the trendiest concoction to hit cafés since pumpkin spice lattes.

So what’s all the fuss about, you ask? And does your trusty cup of joe even need a boost to begin with? According to health professionals, the buzz surrounding mushroom-infused lattes is actually pretty legit — and the reason can be summed up in one word: adaptogens. For those unfamiliar, adaptogens are plant-based substances that help the body resist physical, chemical, and biological stressors in the body. These non-toxic solutions come in many forms, but adaptogenic mushrooms are definitely the popular kids on this block.

"I think adaptogens as a whole are on people's radar right now and having a zeitgeist moment," says functional medicine expert, Dr. Will Cole. "Because people are looking for safe, natural ways to improve energy and improve brain function. I think some of the superstars in this adaptogenic space are certainly mushrooms because of the research surrounding their effectiveness."

To be clear, the most popular and common adaptogenic mushrooms on the market right now include chaga, reishi, and lion's mane. And while ancient Chinese and Ayurvedic medicinal practices have long embraced the fungi for their healing and restorative properties, the Western world seems to just be catching on, thanks to fairly recent findings. One double-blind study in Japan found 30 adults with mild cognitive impairment experienced an improvement in mental function after four months of taking three grams of powdered lion’s mane. Another small sample study found chaga to be a possible immune booster that could even eliminate cancer cells (this study was on animals, and not humans). While many health pros insist more substantial research must be done in regards to adaptogenic mushroom benefits, Dr. Cole insists the odds are in their favor.

If you're wondering what is it about the mushroom/coffee formula that works so well, Dr. Cole says "A lot of this is born out of the growing levels of fatigue in people, brain fog, and even anxiety and depression," says Dr. Cole. "People are looking for ways to improve brain and cognitive health." The mentally stabilizing and clarifying qualities of mushrooms and the energy-spiking one of coffee serve as the perfect pairing for health-minded humans looking to go the holistic route. "They truly complement each other," says Dr. Cole. "Brands like REBBL, for example, combine reishi mushrooms with MCT fat and coffee — those are three things your brain loves. I think it's the perfect trifecta for optimal cognitive function."

And while there are definitely other adaptogen options you can opt for to mix in with your java, Dr. Cole says mushrooms are the better option due to their rare occurrence of side effects. "It's a rare case that people are sensitive to this combination, and it could happen with the way that they metabolize the compounds of these mushrooms," he says. "But it's not a vast majority of people and it's not specifically the mushrooms usually [...] Honestly, the adaptogen I'm thinking of that can cause issues is rhodiola. I've seen people who are sensitive to that particular plant, in that it causes overstimulation and keeps people up at night."

Also, it should be noted that chaga mushrooms are high in oxalate content, which can reduce nutrient absorption and cause kidney damage, according to recent studies. Always consult with a doctor before incorporating a supplement into your diet.

Dr. Cole also suggests always reading labels prior to picking up a mushroom/coffee combo and looking out for ingredients that aren't as wholesome and natural as the main ones. "You want to make sure it's a pure product ad you're getting good quality, stuff," says Dr. Cole. "I would go with brands who are really doing their due diligence in providing good, quality things [...] Read the label and look for any added sugar or emulsifiers that you can be reactive to. Generally you want to stick to earth-based ingredients and recognizable terms."

Interested in giving the health trend a whirl? Ahead, some worthy mushroom-infused coffee options that'll help kickstart your day.