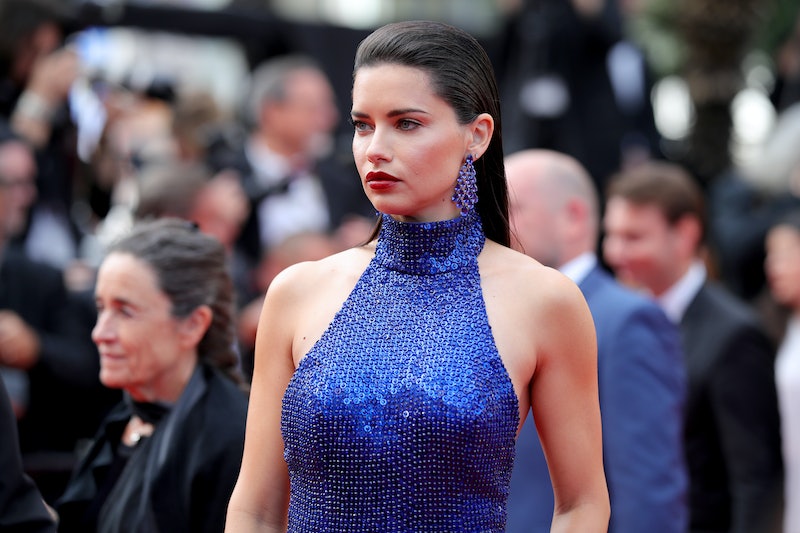 Everyone from Brad Pitt to Britney Spears attended the Once Upon A Time ... In Hollywood premiere on Mon. In honor of the film's retro setting, many guests rocked their best '60s-inspired outfits. Adriana Lima, for instance, wore a red pencil dress that absolutely oozed old Hollywood glam.

Quentin Tarantino's star-studded film about the real-life murder of Sharon Tate, played by Margot Robbie, is one of the most anticipated blockbusters of the season, if not the entire year. It takes place in Hollywood during the summer of '69. Tate, as you may know, was a beloved actor at the time.

In light of the theme, the cast has been serving their best throwback fashion while doing press for the movie (remember Robbie's braided bangs at Cannes?). And while Lima doesn't actually act in the film, she certainly didn't pass up the opportunity to go full '60s during the Los Angeles premiere on Mon.

Lima arrived on the red carpet in a fiery red pencil dress by Magda Butrym. The midi featured a ruffled collar and vintage-inspired elements like ruching on the bodice and a keyhole neckline. The dress was adorned with allover sequins, too, giving it that retro glam look.

Her beauty adhered to the motif impeccably. She wore her chestnut hair down and slicked back to show off those stunning diamond earrings. Her pout was as red as the dress because, you know, that was the look back then.

Her manicure was white and her pedicure black, peeking out from a pair of strappy sandal heels. Overall, Lima's look was one that Tate would have without a doubt approved of (or worn on a red carpet, herself).

Other guests at Mon.'s premiere event included Vanessa Hudgens in a black Armani gown, Britney Spears in a red number quite similar to Lima's, Sydney Sweeney in pink Miu Miu, and Rumer Willis in Ong Oaj Pairam. The lady of the hour — Robbie, of course — opted for a puffy-sleeved Chanel gown.

Lima's piece by Magda Butrym is available for nearly $3,000, but you can copy her aesthetic for less, thanks to these similar party dresses, ahead.

With its keyhole-adorned halter neckline and ruched front, Lima's sequined cocktail dress is a vintage style with a modern spin.

Retro one-shoulder silhouettes are so on-trend, so channel the model's look with this sparkly mini.

Not a fan of full-on sequins? No problem. Opt for this satiny A-line mini instead.

This shiny party dress features the same ruching in the front and a plunging neckline for a modern touch.