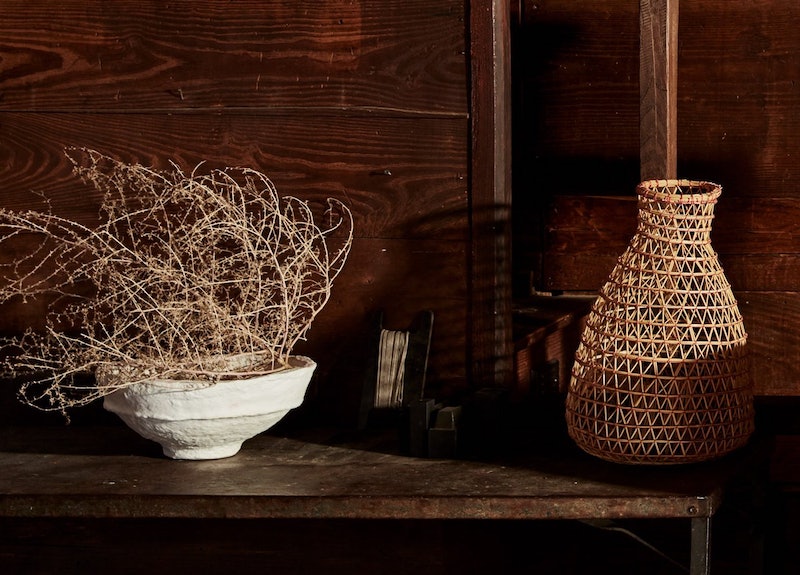 Sometimes it seems like the world is divided into two categories: those who are plant people, and those who are very, very much not. And if you fall into the latter category, it can seem like the options for adding nature-like elements and organic shapes to your space are limited. There is an alternative, though, and it's one that's been gaining popularity as of late, no doubt thanks to the greenery obsession that's basically taken over the world: dried flowers and plants.

As for why they're trending? "I think they speak to our collective love for nature and a desire for simple, humble elements in the home," explains Bloomist's co-founder and creative director Alex Bates in an email to The Zoe Report. "They bring an earthy quality to a space whether used with restraint or dramatic abundance."

Plus, they come with some unexpected benefits. "The obvious advantages are economic and convenience, but one might even argue that they are possibly more sustainable than fresh flowers," says Bates. "Since dried flowers last so long they obviously save you money compared to buying fresh flowers, unless you’re lucky enough to have your own garden or access to a local spot to forage." (Bates also notes that "dried flowers are not completely without their own environmental carbon footprint as many are also imported," but says that one could argue that their intrinsic durability decreases the amount of water consumption that it takes to produce many fresh flowers.)

And while, yes, many dried arrangements tend to stray into "shabby chic" territory — something most minimalists tend to avoid — there are a few types (and tricks) you can try so that yours veer more modern. "Single stems in a vase or a mass of a singular species is our go-to style," says Bates. "When mixing, try to keep the color stories to a tonal vibe with different mix of textures. We love the sculptural qualities of tumbleweed and cecropia."

Of course, there are more options if you're just not ready to bring tumbleweed into your home just yet (though you may be swayed soon). Ahead, more dried flowers and plants if you're a minimalist at heart but can't deny this trend any longer.

It seems like the desert is influencing all the major decor trends these days, and honestly, who's complaining? While cacti had their moment in the spotlight, tumbleweed is the breakout star of 2019 — and it's surprisingly chic. Throw it in a sleek bowl like the one featured in Christie Tyler's minimalist apartment, set it on its own, or even hang it from the ceiling — the options are basically endless.

It seems like everyone's replacing their oversized greenery with sparse branches these days, and it's easy to see why. No matter what kind you choose, the effect is sleek and modern, while still providing an organic shape to the space. To style, take notes from Crate & Barrel and contrast the natural element with a shiny brass vase for a lesson in juxtaposition.

You've probably seen this on your Instagram at some point, but weren't quite sure what that fluffy, feather-like decoration actually was. Well, mystery solved: It's dried pampas grass, and it's one of the trendiest plants you can put in your home at the moment. "The world has gone mad for pampas grass and any grasses in general," says Bates. "They are beautiful en masse or as a simple single stem."

If you're going for a super-minimal, neutral space, you'll love the effect dried palm leaves give. Their large size makes a statement in a simple room, and housed in an equally simple basket, the result is both stylish and calming.

One of the best parts of decorating with dried flowers and plants is the surprising number of ways they can be styled. Yes, many of them look chic on their own — but when mixed together, the effect is stunning and often quite unexpected. For fall, choose a warm color scheme and on-theme textures, and create of mixture of leaves, dried wheat, and brightly colored flowers. In an understated vase, it'll make for a sophisticated, autumnal statement.

If you find yourself gravitating more toward branches than flowers, you'll probably love decorating with vines, too. Opt for a large size, like this giant jungle vine from Terrain, and style it à la Anthropologie by placing it next to an oversized wall hanging or a big piece of art to fill out an open wall.