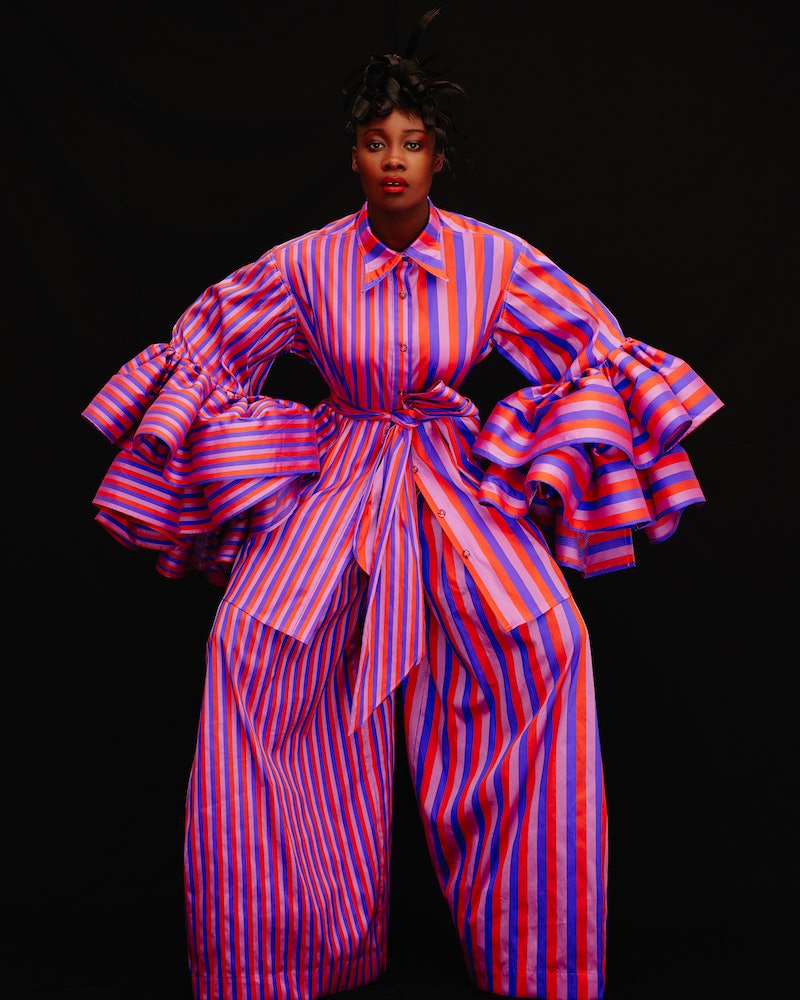 After a long January that somehow both dragged on and skidded by, New York Fashion Week arrived all too quickly. Though some in the industry have lamented about the inaugural city losing its touch, the excitement of NYFW never seems to lose its buzz. Though some designers have fallen off the schedule, and others have decamped for neighboring cities' schedules, I realized I was most looking forward to the impressive lineup of new and emerging designers showing at NYFW for Fall/Winter 2019.

As the week continued, I was most inspired seeing the range of new designers creating collections that stood up to the city's more iconic brands like Carolina Herrera and Marc Jacobs. Some of these newer brands are established enough to earn a spot on the official CFDA calendar, others are still in start-up phase, sending invites out via Instagram DM. The diverse group of younger designers approach fashion from their own unique perspectives, and there's a kinetic energy and momentum that you feel instantly seeing their work. To me, these brands represent a small NYFW revolution, I'm in the midst of a time bursting with authenticity and self identity, and the result is fashion that feels anything but ordinary. Instead, it's a celebration of difference. Below are the five brands to know this season.

Christopher John Rogers' second-ever NYFW presentation started at 8 p.m. on Day 6 — about three days after the initial excitement wares down. (That's all to say, it takes a lot to get a packed crowd in this time slot; Rogers had no issues filling the room.) The collection, at first look, was pure whimsy. But once I took a deeper look, I was taken by the beauty of the presentation. The pure emotion was electric; the entire room felt like a magical time warp of a very specific type of '60s Black beauty and glamour.

As for the clothing, the attention to detail and craftsmanship were obvious. A satin yellow dress featured layers of bellowing ruffles, and the artist Drake Carr lent his talents to a dramatically oversized green-and-blue tulle number which featured an almost cartoonish drawing of a Black woman on the front. Bold patterns, including plaid, stripes, and zebra print all made an appearance throughout. Rogers' fantastical take on fashion feels inventive to the point of make-believe, and was so intricately designed that it looked like it could fit in on the Haute Couture calendar. It was obvious why he chose a presentation format: I had to examine each piece a few times to really get a sense for it.

Rogers, who is only 25, played with proportion well, but also knew when to rein it in: A mint green suit with large lapels stood next to a structured mini in a similarly pretty colorway. In an interview with the designer during the presentation, he was clear that he's not interested in following anyone else's path. He was so passionate about his craft (read: he still sews every piece by hand himself) that it was contagious; we both welled up while discussing his work.

One thing's for sure: We staunchly believe in his vision and hope it makes its way to the red carpet soon, even if we're not sure exactly who the customer is.

I walked into Caroline Hu at 12 p.m. sharp —and as I made my way around the room, the team was adding finishing touches to the models and the set. But, through all of the last minute chaos, the pieces stood out immediately. Each garment is a one of a kind creation, a piece of art made with an astonishing level of craftsmanship.

Some dresses used 20 layers of fabric including velvet, silk, and tulle — sometimes all at the same time. Drawing from Henri Matisse’s Woman Reading, the collection touched on individuality, and the strong sense of female imagination.

Tommy Ton's inaugural presentation felt so quietly synchronized that it melted away the chaos that is New York Fashion Week — at least for 20 minutes. The Deveaux show started with a classic piano rendition by Henri Scars Struck, easing Fashion Week's often-tense energy one key at a time. As the musical piece went on, models drifted into view, walking gracefully in circles one by one until the group created a harmonized commotion.

The collection featured classic silhouettes in luxurious cashmere, wool, and cotton. The palette, a mix of blue and grey plaids along with neutral browns and taupes that felt both timeless and modern. As I watched multi-generational couples, families, and women with beautiful grey tresses stride together in the clothes, I began to reimagine my daily wardrobe, and how it plays into my own sense of presence and self identity.

Luo's collection lured me in and presented a strong vision of womanhood (and manhood, which was a first for the designer). Belted suiting, abstract logo shirts, and sequin numbers all moved down the runway, offering new ways to wear these silhouette and textures together. It was unisex dressing in its purest form in that he creates clothes that the wearer gives meaning to — not the other way around.

This season, iconic designer Marc Jacobs started using his Madison store as a "platform for art, design, and discovery," according to Instagram — and he had the best of the best on hand to help, including stylist Katie Grand, beauty wizards Pat McGrath and Guido, as well as an A-list cast of models. This go around, he set his sights on Japanese designer Tomo Koizumi, who made a splashy inaugural debut. At first look, his designs appeared to be confectionary loofahs — dramatically voluminous layers of tulle that made for top tier Instagram bait.

But upon closer examination of the show notes, each bold, dramatic colorful dress was inspired by hanawa, a Japanese funerary banner with plastic floral designs. These massive creations had layers of ruffled tulle in rainbow colors, some harnessed around Lady Liberty shirts; Joan Smalls, Bella Hadid, and Rowan Blanchard all donned the dreamy creations down the the makeshift runway (which was more of a dramatic staircase than a catwalk). But, to me, these mega-watt stars were almost a second thought, as I couldn't take my eyes off of the colorful and fluffy tulle creations.