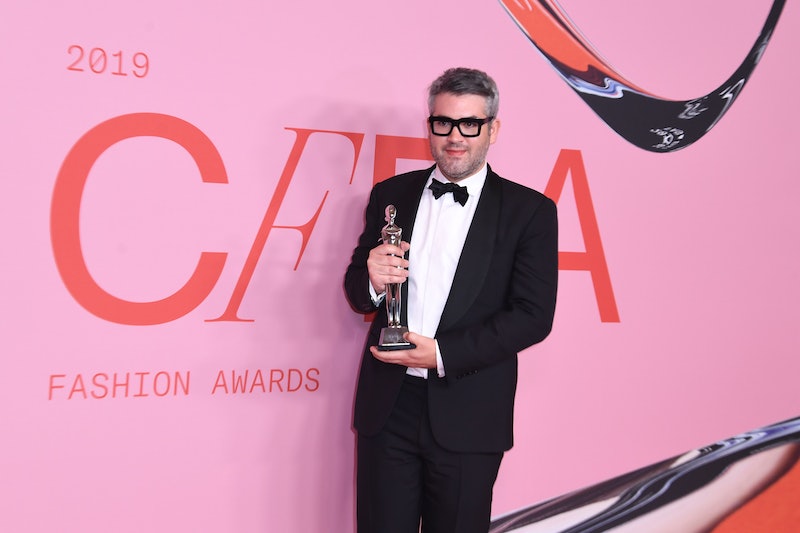 The Met Gala is often casually referred to as "the Oscars of fashion," because of the A-list attendees and killer red carpet looks. But in reality, the CFDA Fashion Awards may be a better comparison to Hollywood's big night because it's actually an award ceremony too. Every year, the Council of Fashion Designers of America votes to honor a number of designers and industry veterans for their mark on fashion in the United States. For 2019's CFDA Awards, the winners and nominees walked the red carpet alongside top models, and celebrities including Diane Kruger, Jennifer Lopez, and Gigi Hadid, and ultimately shared an evening together celebrating American fashion today.

This year, the range of nominees was impressive — womenswear designers included industry veterans like Marc Jacobs and Kate and Laura Mulleavy of Rodarte. But, there were also a number of noteworthy newer talents: Rosie Assoulin, Sander Lak for Sies Marjan, and Catherine Holstein for Khaite, just to name a few. As the audience cut into steak and sipped on wine and tequila (one smart attendee even ordered in Chipotle), they enjoyed Hasan Minaj's jokes roasting Gucci designer Alessandro Michele, as well as his commentary on the general lack of style associated with those in his line of work.

The night also served as a passing of the torch (both literal and figurative) in which Diane Von Furstenburg handed an actual Lady Liberty-inspired torch to Tom Ford as she also passed on the role of CFDA chairperson, a title she's held for the last 13 years. Though the role will change under Ford's direction, DVF's legacy will surely continue as the council continues to support those who are inspiring the new era of fashion in the US. Read on for a breakdown on a few key wins along with a full list of the evening's award recipients.

Emerging Designer Of The Year: Emily Adams Bode For Bode

In a category that was packed with up-and-coming talent, menswear designer Emily Bode took home the award for emerging designer of the year. Bode has established a signature aesthetic repurposing vintage fabrics and reimagining retro silhouettes for 2019. Bode is also a finalist for another major industry accolade: the 2019 LVMH prize, so if you don't know her work just yet, you'll want to keep an eye out.

Maxwell left many attendees of his Fall/Winter 2019 runway show in tears after he walked the finale alongside his mother and the women who work for eponymous label. So, it should come as no surprise that the Project Runway judge left the audience equally emotional when accepting his CFDA Award (a few drinks in, he noted during his speech). Maxwell's bold, inclusive, and glamorous designs have won over models and starlets alike.

Accessory Designer Of The Year: Ashley And Mary-Kate Olsen For The Row

Ashley and Mary-Kate Olsen are notoriously private, and though they took the stage to accept their award for Accessory Designer Of The Year, they kept their acceptance speech especially short and sweet, simply thanking their supporters. The duo were awarded their fifth CFDA award last night, an impressive feat that only helps to further prove their continued success.

Lopez took the stage to receive the Fashion Icon Award in a two-piece Ralph Lauren ensemble that left no room for debate over that this award was destined for her. Lopez also walked the carpet with her partner, former Yankees player Alex Rodriguez, who snapped photos and doted on the award winner.

View the rest of the evening's winners below.

Board of Directors’ Tribute Award: Barbie