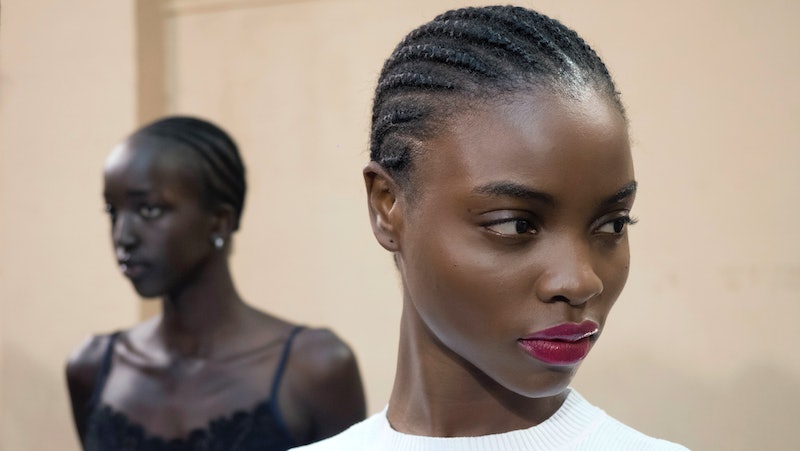 Old acquaintance may be forgot, but your old hairstyles from 2018? Those are another story. There's something special about every hairstyle or look, as beauty is in the eye of the beholder. However, sometimes a lack of inspiration happens — especially after a whirlwind of company dinners, holiday parties, and visits with family and friends. Not anymore. These natural hairstyle ideas, inspired by celebrities like Angela Bassett and Viola Davis, aren't just suited for those with long and loose curly hair.

No, the magic is meant for all lengths and textures — short, long, and in-between. The unifying "rules," if you can call them that, are the same for everyone, though: moisture and maintenance. It's crucial for this time of year, especially when some naturalistas are prone to stuff their curls in a beanie (been there, and doing it now). Because let's face it: No one wants to spend an hour in the mirror styling their hair every morning. "Women — female entrepreneurs and on-the-go moms alike — want to style their hair with low-maintenance looks and still look good," Tym Wallace, hairstylist to Taraji P. Henson and Zendaya, tells The Zoe Report.

A lack of time doesn't mean that your style has to look low-maintenance, though. Many of the styles ahead only require a few steps and products... and you'll surely want to wear them to create new memories this year and beyond. Keep scrolling to see them.

Cornrows With A Braided Bun

Bun With A Choppy Bang

Lacy Redway gave Kiki Layne a sleek updo for the Gotham Awards. For a style that stays all night, try setting with a holding spray.

"The entire look was very minimalistic," hairstylist Nai'vasha Johnson tells TZR. "After diffusing, I finished with a light mist of oil."

SZA's edges were laid to perfection for a December event.

Later on in the month, Williams wore her hair in a high ponytail — the perfect match for her bedazzled headphones.

For fringe like SZA's, wrap small sections of your hair around a small barrel iron. Release without separating.

François, who also works with Lupita Nyong'o, always finds unique ways to use gold hair cuffs on his clients.

You'd need a lot of these mini bobby pins to secure the ends of your braids to make up these buns.

For a little dimension, Nyong'o added a bit of gold thread to the top of her half-up.

As I Am
Doublebutter Cream
$13

Danai Gurira's faux fringe is easy to achieve — just pin the ends of a small section down behind your ears (or into your bun).

For bulkier braids, use a wide elastic band for ponytails — they have more stretch.

All you need is a bit of sheen spray for this look... just spritz and go.

Don't feel like spending hours on your braids? Try styling your Afro with a lone cornrow.

Another cool tool for holding up voluminous curls? The PuffCuff, which was created to hold hair without snags (and without the tension headache).

What, you thought that rhinestone season was over along with the holidays? Try again. Any season is a good enough one for some surprise shine.

Takisha Sturdivant-Drew uses extensions from her own line on Washington, her longtime client and friend.

Grab a strong gel for a brush-backed style like Zendaya's.

Any selfie from Beyoncé should be cherished. This one, with her brushed-down baby hair and shiny braids, is no exception.

Don't think that pigtails are juvenile, especially when teamed with simple (but sophisticated) makeup.

Keke Palmer continued her reign of pretty protective styles with this lovely bun.

Halle Berry is a timeless beauty, and her soft and easy waves are just as classic.

Yet another way to style your gold cuffs, as modeled by Ella Mai.

Dewanda Wise didn't need fancy hair accessories or a lot of length for her look to stand out... just well-defined texture.

Ahh... the power of smooth parting never ceases to amaze me.

Yene Damtew, who styles Mrs. Michelle Obama's hair, tells TZR that she uses this leave-in from Mizani for

Braids With A Brimmed Hat

A silk-lined hat, like the ones from Layd, will protect your hair from drying out too quickly.

Take a small section of your hair, slick it with gel, and brush it down in the design you desire a lá Janelle Monáe.