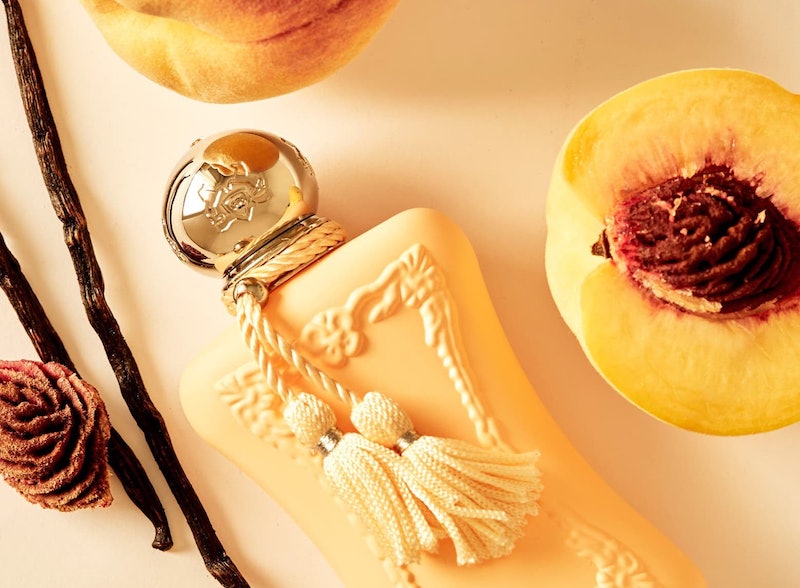 September is a month of transition. Cutoffs give way to leather culottes; iced coffee is replaced by hot lattes; bare arms seek the comfort of cozy sweaters. It only makes sense that your perfume should transition, too. The best new new fall 2019 fragrances perfectly capture that warm-but-crisp feeling of September — high sun and turning leaves, fresh apples and rich spices — and bottle it up in scent form.

“September as a scent is a layered concept, not unlike the structure of a typical fragrance,” Mariya Nurislamova, the CEO and co-founder of Scentbird and its new brand, Confessions of a Rebel, tells The Zoe Report. She describes the phases of fall as only a perfumer would — starting with a top note (that holding-onto-summer vibe) and finishing with a strong base (woody notes that call to mind a crackling fire).

“September opens strong and warm, skin-like musks mingling with a refreshing rosé element as a nod to the end of rooftop season,” she says. Try Cassili from Parfums de Marly, with a top note of rose, or Confessions of a Rebel’s About Last Night, with a “sparkling cocktail” of bergamot and red grapefruit. Lancôme’s latest, Idôle Eau de Parfum, also fits the profile with touches of both Turkish Isparta rose petal essence (a note that's exclusive to the brand) and a more traditional French centifolia rose. For an unexpected take, look to Electric Rhubarb from new fragrance brand Floral Street. “Rhubarb is a paradox of sweet and bitter,” Michelle Feeney, the founder, tells TZR. “It is sharp, green, and tangy but also soft and fruity. It almost smells like the crunch of stalks being broken.”

As the season progresses, Nurislamova suggests moving into a cozier scent. “The heart of fall can also be described as warm, taking on the comforting definition of the word,” she says; citing clean cotton, amber, and coffee as some of her favorite notes. Cartier’s Les Heures Voyageuses Oud & Menthe Parfum fuses amber and mint for a fresh feel, while Kintsugi by Masque Milano mixes top notes of amber with a base of sweet vanilla. Or, layer on the scent of leather (and a hint of lotus) care of Leather Eau de Parfum by Malin + Goetz. “Think of it as your warm leather jacket on a crisp fall day, but in scent form,” the brand said in a press release.

Ahead, 14 fall fragrances to capture every moment of the season ahead.

Bibliophiles, stand up: The newest REPLICA scent transports you to your favorite reading nook, care of the cedarwood, patchouli, and vanilla absolute notes. No library card required.

Fruity blackcurrant is balanced out with musky violet and soft barley.

The Chloé girl is "forging her own road in life ... the wind in her hair, the sunlight on her skin, she is free," the brand tells The Zoe Report in a press release. Consider that feeling effectively bottled with Chloé L’Eau, launching Sept. 1.

Come Nov. 5, Heretic Parfum will release its next "dirty" scent: Dirty Violet. "Violets are floral, woody, and powdery all at once, making Dirty Violet a particularly elusive fragrance that refuses to be defined," the brand says in a press release. The top note is blended with patchouli (at the heart) and sandalwood (at the base) for an extra dose of warmth.

In a WSJ interview, Hedi Slimane, the creative director for Celine, says this scent is “like the library of a Parisian hôtel particulier from the 18th century.” Which, yes, please. It launches in October.

Launching in October at Nordstrom, Atelier Cologne's Patchouli Riviera "has more than a 95% level of ingredients of natural origin," the brand says in a press release. You'll find patchouli from Indonesia, pomelo from Italy, and pink pepper from the Indian Ocean.

Leather Eau de Parfum was inspired by the sensation of slipping into a vintage leather jacket — preferably, a soft, worn-in version from the '70s — on the first chilly day of fall.

Fall is synonymous with spice — ginger, cinnamon, pumpkin — and Dior's latest is the perfect blend of (almost) all of them. Spritz for a serving of cinnamon, ginger, black pepper, coriander, and nutmeg.

"September smells like Wild Vanilla Orchid for Floral Street," Feeney tells TZR. "As the seasons change, Wild Vanilla Orchid embraces with wrap of vanilla and a soothing blend of warm, sweet, exotic ambroxan and cashmeran. It is like snuggling up in a warm blanket, whilst being uplifted with lemon, cassis and bamboo."

Notes of mint and wood come together with a hint of sugar in Cartier's Les Heures Voyageuses Oud & Menthe Parfum. The effect? A fresh, warm scent that's just sweet enough.

Described by the brand as a "musky floral," Idôle was created by three female perfumers who aimed to capture the essence of femininity without resorting to tired tropes. The resulting mix features clean, crisp fruits and florals — and artfully side-steps the stereotypical, candy-sweet smell of traditionally "feminine" perfumes.

Diptyque's just-launched "perfumed bracelet," infused with warm sandalwood, is the subtlest (and coolest) way to wear fragrance this fall.

With florals, woods, and a scoop of vanilla, Cassili is the ultimate sweet-but-not-too-sweet scent for September. (Although, to be honest, the chic bottle is reason enough to give it a try.)