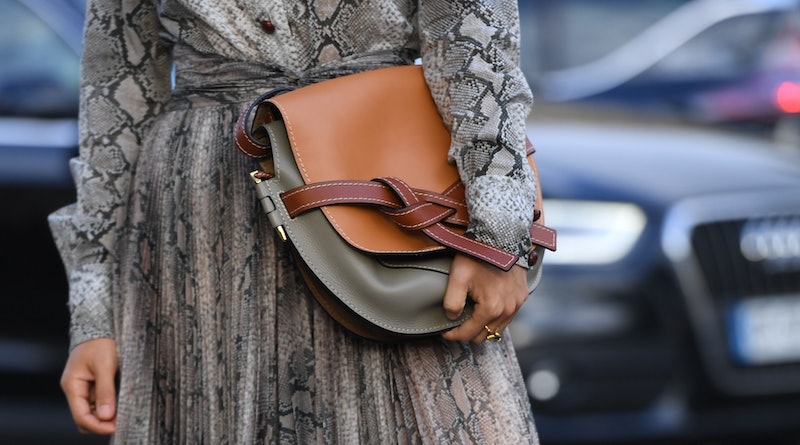 Handbag hall-of-famers like the Hermès Birkin, Chanel 2.55, Louis Vuitton Speedy, and the Céline Luggage will always hold their status as time-tested classics worthy of the investment. Lately though, there's been an influx of contemporary contenders that are quickly earning cult status, creating a set of trendy handbags worth noting for 2019.

“Luxury brands such as Gucci, Chloé, Saint Laurent, and Prada are still very popular with our customers, and we don’t see this changing anytime soon,” explains Elizabeth von der Goltz, global buying director at Net-a-Porter. “However, we are also experiencing customers interested in new brands, especially in the mock croc fabrication by the likes of Gu_de and By Far.”

With this new generation of up-and-comers creating the next It-bags, there is an overarching momentum toward designs that straddle the line between trendy and timeless. In addition to croc-effect textures, other popular style markers include structured silhouettes and a certain polished sensibility. “We are seeing more classic, lady-like bag shapes,” von der Goltz notes. “The structured bag trend derives from the success of brands such as Gabriela Hearst, and we’re bringing in new brands to Net-a-Porter that speak to this trend, including Ratio et Motus and Chylak. This trend appeals to customers who want timeless bags, and on the other hand, those who are looking for the latest trends and brands.”

From both cool luxury labels and up-and-coming brands of Instagram fame, there are a handful of bags that have achieved cult status among fashion insiders, influencers, and editors. For von der Goltz, it’s the latest Loewe Gate bag, the Chloé Tess bag, and the Wandler Hortensia that are topping her list as the ones to watch. What others are poised for lasting greatness? Scroll on for a full list of the noteworthy bags that could well be considered the icons du jour.

It’s been a banner couple of years for By Far. Since launching in 2016, the brand has achieved cult-level fandom in both the shoe and bag categories, the latter of which puts its stock mainly in mini bags. The petite purse trend is holding strong, and By Far’s adorably tiny top-handle bag is leading the pack.

If you’re an It-bag aficionado, you likely already own and love one of Loewe’s iconic styles, such as the Puzzle, the Hammock, or the Basket. The Gate Bag is giving those guys a run for their money though. The popular pick is features both a sophisticated design and impeccable craftsmanship. While its classic saddle silhouette won’t go out of fashion anytime soon and its luxe leather will only improve with age, elements like the contrast stitching and the knotted strap detail (which doubles as a handle so you can carry it like a clutch) add modern appeal that makes the Gate Bag even more of a power player.

Sometimes the best things come in the simplest packages. Such is the case with Simon Miller’s Bonsai bag. The style shot to the top of everyone’s wish list soon after launching in 2014 and thanks to new colorways and materials, has continued to hold its clout as a must-have bag many seasons over. Characterized by a cylindrical body and circular top handles, the streamlined bucket feels equal parts laid-back bohemian and no-frills minimalist, making it a versatile option for practically any personal style.

Even if you don’t recognize the name, you’ve undoubtedly encountered a Danse Lente bag somewhere on Instagram. The Phoebe Bag is a new favorite among influencers and editors, followed closely by the simpler, subtler Johnny style. At its core, the Phoebe is a classic lady bag, but Danse Lente’s focus on architectural shapes and fresh color combos gives it an entirely modern feel. This arty top-handle takes any outfit up a notch, and at around $430-$490, it’s a statement piece that won’t cripple your bank account.

The fanny pack came back, and luxury designers leapt at the opportunity to revamp the ‘90s staple — none with quite so much success as Gucci though. The label’s Marmont Belt Bag, emblazoned with that recognizable gold double-G monogram and crafted in quilted leather and velvet variations, is a mainstay in the bag collection of practically every street style star and fashion blogger out there.

See-through bags are very now, but Staud’s Shirley bag is more than just a flash-in-the-pan interpretation of the trend. The emerging label manages to make PVC look 100 percent luxury, elevating the clear plastic tote with interior compartments done in mock croc and other rich leather. Some styles feature added embellishments like rhinestone studs or beading. It’s become a fast favorite among fashion girls looking to find the sweet spot between trendy and elegant.

In a sea of basic crossbody bags and tried-and-true totes, something whimsical and playful is a welcome breath of fresh air. Shrimps is one of those brands that is making fashion feel fun again — especially with its beaded Antonia Bag. It has all the markers of a novelty moment, but with the understated elegance and beauty of a bag that won’t fade from glory when the next fashion fad comes along.

Building on the success of the Pierce Bag, JW Anderson released a new style that echos similar elements. Enter: the Disc Bag. Also a ring-accented style, the Disc features a slightly more streamlined look — smaller holes, a leather strap, and a closed hoop intersected by a straight bar, instead of the circular barbell that adorns the Pierce. It’s an understated alternative that still carries all the edge and cool factor of its predecessors, but won’t look dated in a few years’ time.

When it comes to choosing a classic, goes-with-everything, never-out-of-style bag, Wandler’s Hortensia checks all the boxes. It’s utilitarian in the sense that it avoids any unnecessary frills but has plenty of practical features. There’s a top handle, a long strap for crossbody wear, organized interior compartments, and an exterior patch pocket at the back for easy access to the cards you use most. The Hortensia is the sort of bag that you’ll reach for on a daily basis as your default option.

Two major runway themes come together for a statement bag with major staying power: feathers and a drawstring silhouette. Inspired by the magical beauty of illuminated paper lanterns and Cinderella’s carriage, The Volon’s Cindy is the perfect party bag. Not only is it just the right size to hold the essentials, but it has the style potential to make your entire outfit. But don’t silo Cindy as an occasion-only bag — the elegant plumed pouch can enchant a daytime look just as well as it can an evening ensemble. Don’t sleep on Cindy, she’ll dazzle and delight, morning, noon, and night.

No list of bag icons is complete without a Chloé inclusion. The brand is known for its It bags, among which are the Drew saddle, the Nile bracelet bag, and now the new Tess bag. A sleek saddle silhouette featuring smooth leather and polished gold hardware, the Tess bag is similar to the classic Drew, but a bit more on the chunky side, and with a subtle equestrian details. It's a brand new style for Fall 2018, but it has quickly joined the ranks of Chloé’s most sought-after accessories.

While not exactly a newcomer, per se, Dior's beloved Saddle bag was recently revamped and reintroduced to the fashion world, prompting us all to remember just how much we loved it back in the early aughts. Among the reasons why? It plays into our collective love of all things nostalgic, plus its curvy silhouette is a unique interpretation of the ubiquitous saddle style. And, of course, who doesn’t love an iconic logo moment? It seems like this time around, Dior's Saddle is here to stay.