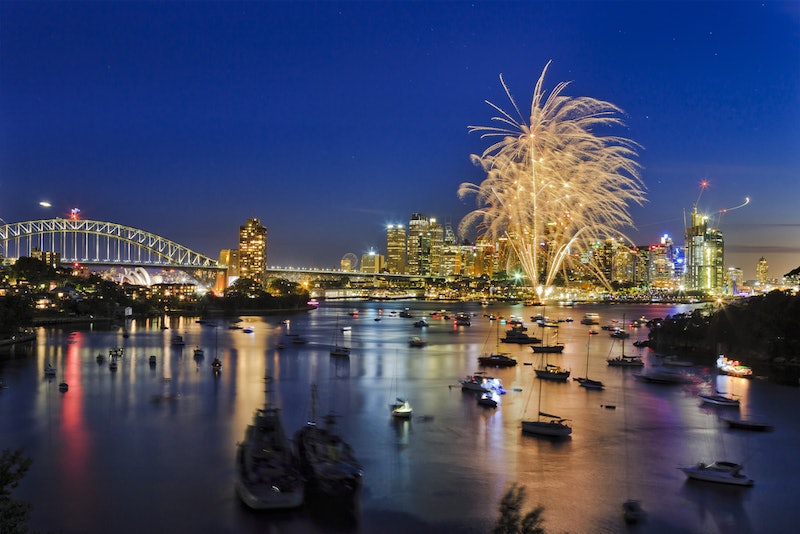 New Year's Eve is one of those mystical, enigmatic types of holidays that, even though festivities virtually only last a few hours, it somehow motivates you to concoct the most ideal situation for yourself. This generally tends to disappoint due to restrictive work schedules, lack of willing participants for aforementioned ideal situation, or a range of possibilities from tight budgets to lack of childcare/petcare. Obviously, planning a trip requires time, but we'd venture to guess many of you are still sorting out your last-minute New Year's Eve plans — if this is the case, do read on.

The very thought of cobbling together a getaway in the 11th hour may seem daunting, but that's what the internet is for, friends. Tapping industry experts and employing some wanderlust-fueled imagination, the following roundup of ideas for celebrating New Year's Eve should be useful no matter the type of night you're looking to have (e.g., relaxing indoors, a fancy fête, etc.) or where in the world you'd like to run off to.

Before diving into the (literal) world of possibilities, a few effective tips for hacking a smart and as-cost-effective-as-possible flight now that you're booking a ticket a mere few weeks out. It's not too late to kick off the new year right.

If you're keeping your destination national, "round-trip flight prices are currently averaging about $350 round-trip in the United States," explains Liana Corwin, consumer travel expert at Hopper. "You can save the most money by leaving on Monday, December 31 and returning Friday, January 4."

Experts agree: President of ExpertFlyer Chris Lopinto advises that “For the best airfares, travelers should consider flying in or out on the holidays themselves as airlines typically have more seats available (same for Thanksgiving and Christmas Day)."

With money-saving tips behind, scroll down for your official guide to pulling off a last-minute New Year's Eve getaway. Bon voyage and happy new year!

Chill Out in The Cotswolds

Set off to the area of outstanding beauty, a.k.a the quaint village of Broadway in the UK. Stay at the newly-refurbished boutique property called The Lygon Arms for a two-night New Year's Eve party including champagne afternoon tea, a five-course gala dinner with live entertainment (magician and harpist!), and plenty of cocktails, canapés, and even a decadent New Year's Day brunch.

Take in the breathtaking views of the south lake shoreline from a room at Edgewood Tahoe in Lake Tahoe, California. This year, the hotel is throwing a dinner party inspired by Truman Capote's iconic Black and White Ball, which will include an eight-piece band, a four-course wine paired meal, and old Hollywood films topped off with a round of fireworks to kick off the new year.

Cozy Up In Upstate New York

It doesn't get much more quintessentially cozy than an upstate mid-nineteenth century candle-making factory converted into a boutique hotel. The Wick, a Tribute Portfolio Hotel located in Hudson, New York, is throwing a low-key masquerade party with hors-d'oeuvres, dancing, and a champagne toast at midnight. Easy peasy.

Jet to Playa del Carmen, Mexico for an all-night soiree at the Thompson hotel. Fire dancers, pool performers, a live rooftop performance — all things you can expect as well as plenty of delicious food from the CATCH culinary concept and, of course, champagne and fireworks.

Julia B. Pirrung from Jetset World Travel recommends, "Brazil, especially Rio de Janeiro, [as] one of the most iconic destinations to ring in the new year — in white. Expect spirited celebrations surrounded by vibrant people along Brazil's breathtaking coast during the peak of the South American summer." The new e-visa program that launched in early 2018 is now $40 compared to $160, making it friendlier on the wallet.

If experiencing New Year's Eve above Times Square sounds magical to you then consider New York's Marriott Marquis. Within the hotel, there are a few different packages for the holiday including a five-course meal in its 360-degree revolving restaurant, a premium open bar, and late-night bites in the lounge to keep the evening going. There are even rooms with a view of the ball drop if you feel like staying in with your partner or a couple of friends.

Jody Rains, travel consultant for Strong Travel, encourages jet-setters to head to Iceland for the holidays. "Reykjavik is offering many holiday activities and it is all about the Northern Lights.  With more direct flights to Reykjavik, it becomes an easy and quick trip."

Made for the Maldives

Looking to escape the chilly winter temps. Travel to this Caribbean island where the weather is warm and the festivities are aplenty. Considering Aruba is a mere 21 miles long, hitting multiple celebrations is not only a possibility, it's a must. The "one happy island" is chock-full of daytime activities including windsurfing, Jeep tours, hikes, and, of course, beach-dwelling. But evenings are not to missed either, particularly on NYE. In addition to epic fireworks, there are endless parties to attend at one of the island's many resorts. Settle on one or party hop around the island for night you won't forget!.

Fall In Love With Charleston

Not only was Charleston, South Carolina recently named the top city in the U.S. by Travel + Leisure, but it also happens to be a fantastic destination to ring in the new year with friends. Stay at King Charles Inn and head to a party aboard the USS Yorktown or the Snyder Grand Ball at the South Carolina Aquarium.

Wine and Dine In Sonoma

What sounds better than indulging your inner wine nerd in Sonoma, California with your friends? Visit the Charlie Brown Christmas Tree Grove and enjoy the 200 brightly lit and decorated trees or indulge your wine-loving palette with a "Holidays in Healdsburg" Tour, a guided fine wine and foodie walking tour.

All In for Aspen

Indulge in a festive snowcapped New Year's Eve celebration with pals by way of Aspen, Colorado. If you choose the Viceroy Snowmass New Year's Omakase you can expect Snowcat rides along the mountain, a Champagne Butler on call (yes, that's a thing), a personal shopper to outfit you and friends, and other party activities. Nearby at the St Regis Resort & Spa don't miss the New Year's Eve celebration with a dinner at the Velvet Buck as well as bottomless champagne, party favors, and a jazz quartet.

This article was originally published on 12.5.2018