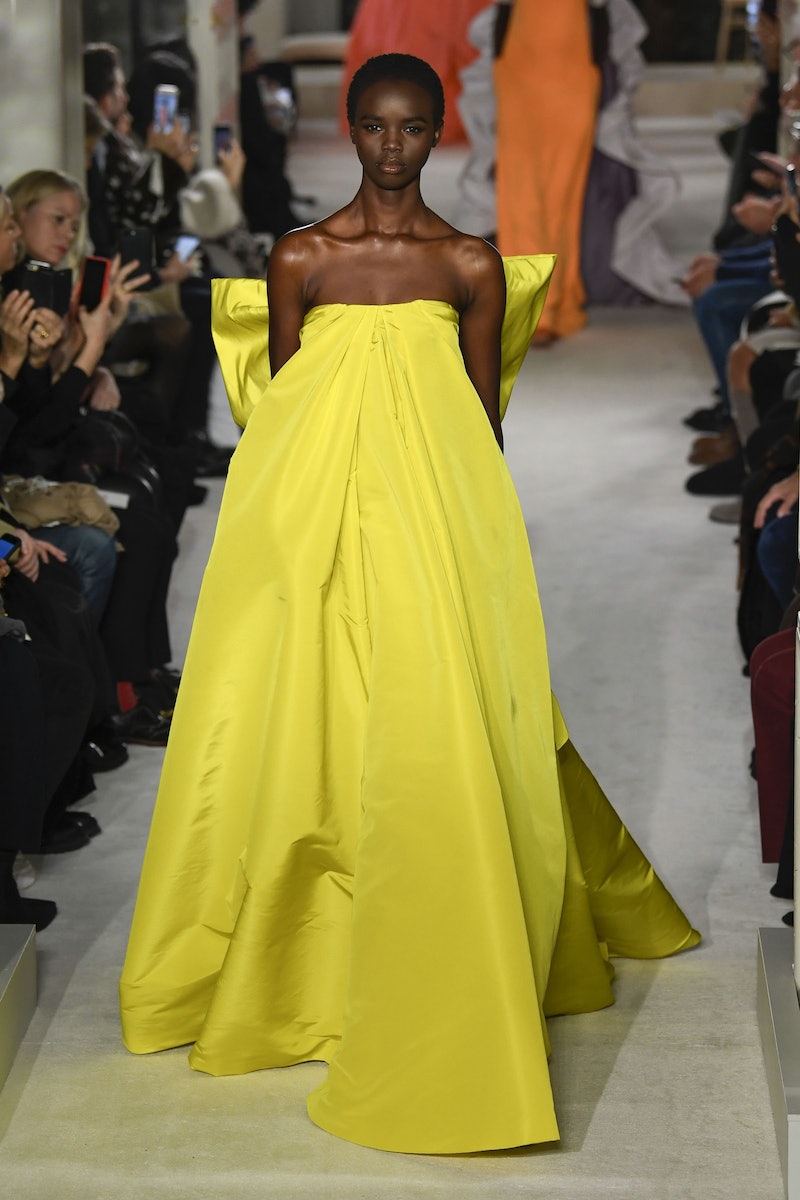 Fashion editors are in the prediction business. Whether it's forecasting the next big footwear trend or combing out the next brand to make it big, looking to the future is all in a day's work. (Maybe that helps explain fashion's long-standing love affair with the occult.) So, it should come as no surprise that with the Oscars closing in, the time is nigh to consider what this year's top contenders will be wearing. Couture week has concluded, and there are plenty of fresh designs practically begging for a spot on the red carpet. Below, you'll find ten of those Spring/Summer 2019 Haute Couture gowns that deserve their Oscars moment, too.

This year, nominees run the fashion gamut, with first timers like Roma's Yalitzia Aparicio already showing serious sartorial prowess. Meanwhile, red carpet regulars like Emma Stone and Charlize Theron will also be there to show off their signature styles (bold color for Stone and well, Dior for Theron). Below, find The Zoe Report's predictions of 10 couture gowns that are sure to be red carpet contenders at this year's Oscars. So, while you wait excitedly for February 24th to arrive, take a gander at the dresses that just might make their Academy Awards debut.

Lady Gaga kicked off awards season in a stunning blue (or was it periwinkle?) Valentino gown, so it only feels fitting that she don another high-saturation creation from designer Pierpaolo Piccioli. The best actress nominee will no doubt opt for something dramatic — don't forget she once walked a red carpet in a meat dress — but this peachy gown seems ripe for the occasion.

Regina King constantly tops lists of red carpet best dressers. Her neon-green Christian Siriano gown at the 2018 Emmy's was a crowd favorite, as was the pink, shimmery Alberta Ferretti she chose for this year's Golden Globes. In the same vein of sleek but statement-making, it's easy to imagine King in this stunning one-shouldered dress by ever-popular Elie Saab.

Roma star and best actress nominee Yalitza Aparicio is spending her first major red carpet season wowing in designs from fashion insider favorites that range from Delpozo to Miu Miu. For The Oscars, here's to hoping that Aparicio leans fully into the magic of the night and goes for this dreamy Cinderella-esque design from the Zuhair Murad runway.

Though she tends towards Louis Vuitton (she's an ambassador for the brand), this highlighter yellow Valentino gown would also be right up Stone's alley. The best supporting actress nominee loves to sport bold colors on the red carpet, and also isn't afraid of dramatic volume or statement details (like this gown's killer bow).

A thigh-high slit may not be something Adams has sprung for in the past, but this year she's been all for dramatic black gowns — which is why this Giambattista Valli look is a major contender. After wearing Celine to the SAG Awards and Dundas Couture to the Producers Guild Awards, this look would take 2019's noire theme to the next level.

Weisz has a knack for choosing classic silhouettes with unique details that take them above and beyond. The best supporting actress nominee chose a Celine sheath dress with a frilled neckline for the Golden Globes. For the Oscars, it's easy to envision Weisz in this Givenchy number with one alteration: shrinking the size of the belly-button-grazing keyhole. The intricate skirt and sleek top combine to offer up the old school glamour you typically expect from the actress.

At just about every red carpet these days, you'll find Robbie in a Chanel creation. For this year's Oscars, it's easy to envision the actress in this intricate hip-skimming style instead an over-the-top gown. While she opted for a slinky white and gold design from Chanel's resort collection for the SAG Awards, this look has the refined elegance you expect with the Academy Awards.

Harrier often opts for Louis Vuitton (she starred in the brand's Spring/Summer 2018 campaign), but after recently swapping her go-to for Oscar De La Renta, here's to hoping she continues to mix things up. The Blackkklansman star doesn't shy away from showing skin on the carpet, so this lacy Givenchy number seems like the perfect choice.

Theron will be a presenter at this year's Oscars ceremony, and as a face of Dior's J'Adore perfume, it's basically guaranteed she'll choose something straight from the brand's latest runway. Though Theron chose a more fitted style for the Golden Globes, this elegant strapless style feels just right for Oscar's night.

The Crazy Rich Asians star has spent this red carpet season wow-ing fans in dreamy gowns, so there's no reason to expect anything different once the Oscars roll around. This frothy pink Giambattista Valli gown is the perfect mix of romantic and playful.