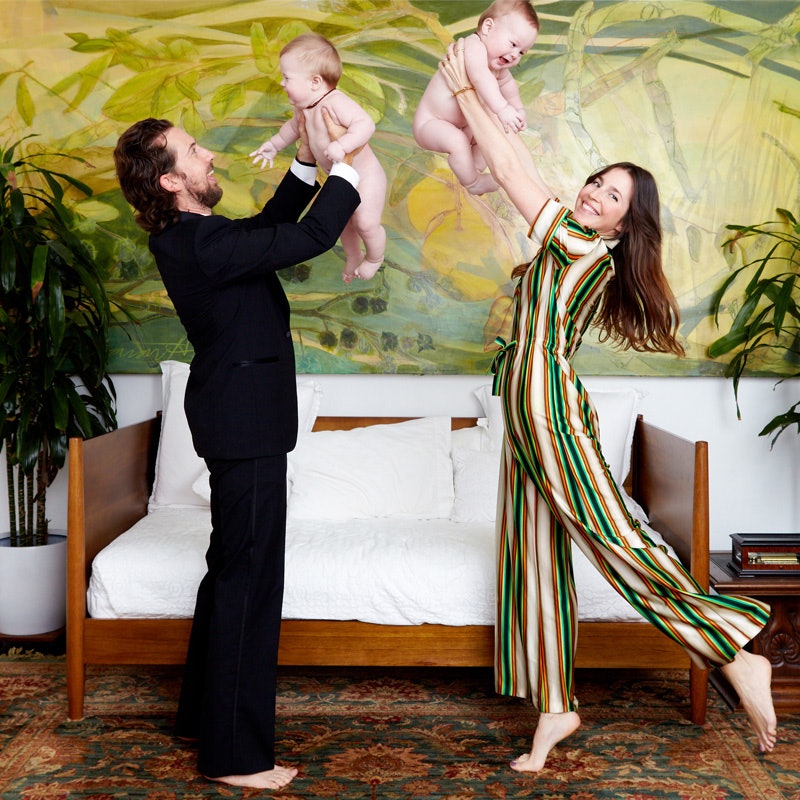 Wait, there's two of them?!

I’ve never been accused of being quiet, but at the ultrasound appointment 9 weeks into my pregnancy I was at a loss for words. The technician announced I was expecting twins leaving me in a temporary state of absolute shock. “This is the calmest response I’ve ever seen”, said the nurse, little did she know I was struggling to even formulate a sentence. Thankfully shock was rapidly replaced with overwhelming joy and I now have two happy, healthy 17-month old boys. Here’s how I maintained my career in fashion with a growing family.

I always knew I wanted to be a working mom. I also knew when I graduated from college I needed to travel and explore before even thinking about having kids. So I moved to New York City and started looking for a job in “fashion.” I say this in quotes because I literally had no clue what avenue I wanted to pursue. With no work experience I couldn’t distinguish between the worlds of advertising, public relations, design and editorial. I just needed to get my foot in the door. My lucky break came one month after arriving in the city via a friend of a friend who worked in the accessories department of Harper’s Bazaar. I got an internship there in August of 2001, which primarily meant I was responsible for organizing walls of shoes, drawers of scarves and stacks of jewelry trays.

After arriving in sunny California, I got another break and landed an interview with Rachel Zoe.

I had died and gone to “fashion” heaven. Over the next 10 years I worked at InStyle, Lucky and Jimmy Choo in NYC and London. Then, I fell in love and decided to move to Los Angeles to be with my beau. After arriving in sunny California, I got another break and landed an interview with Rachel Zoe. I will never forget that day. She came out of her insanely beautiful, lushly landscaped Beverly Hills home in a black one-piece jumpsuit, wearing a million necklaces and bracelets and sky-high Givenchy platform booties. Her friendly disposition was so disarming, I instinctively wanted to hug her as though we were old friends. I knew immediately this job was an once-in-a-lifetime opportunity, especially because Rachel is the definition of a multihyphenate, powerhouse, working mom. I started as her assistant, and now 3 and a half years later, I am the Fashion & Beauty Editor of The Zoe Report.

After settling in LA, I got married to my longtime boyfriend, Will Nash, and at 34, I felt ready to start a family. Although I was trying to have a baby, no one was more shocked than me when I was told I was pregnant with twins—identical boys. On one hand, I was thrilled at the notion of knocking out two babies in one pregnancy and having that be our family: Done and done. On the other hand, this was more than I had originally signed up for—two cribs, two car seats, two everything! And so began the highly choreographed, logistically intricate routine that is a life with twins.

I knew I wanted to return to work after having the babies. I love my job, and I knew if I took five years off to raise kids, I would feel completely out of the loop trying to re-enter the workforce—especially since I work in digital media, a notoriously fast-paced industry. Keeping one foot firmly planted in any career seemed like the best fit for me. That said, when I found out I was having two babies, I knew I needed extra time off to properly adjust. I requested six months off for maternity leave, plus the month before I delivered for bed rest. Of course, the notion of leaving a job I loved for a total of seven months made me feel anxious, but I remember someone once told me that there was never a convenient time to have a baby and that everything would be there when I got back.

In July of 2014, Dylan Lion and James River Nash came into the world. The second I heard them crying, I immediately burst into tears of happiness and relief. My little nuggets made it, and life as I knew it was forever changed. The truth is that I was in complete survival mode for the first six months. I breast-fed the babies exclusively for four months, which required me to pump every two-to-three hours all day and through the night (at the height I was pumping 60 ounces of milk a day). It was exhausting, but I knew it was good for the boys and breast-feeding really helped me get my body back. During my pregnancy I gained 50 pounds and worried about what my figure would look like after carrying twins. Thankfully, the combination of breast-feeding and keeping up with the demands of newborns helped me to fit into my old jeans after six months. Talk about the most exhausting diet ever.

After being away from the office for seven months, I returned to work full time with trepidation. The idea of not being with the babies through every bottle and burp was petrifying, but I decided to do my best to just let go and know that everything would be okay. My situation was ideal and very, very lucky because Rachel Zoe and her husband, Rodger Berman, started a nursery in our office which meant the boys could come to work with me every day. With the babies in the same building, I didn’t have to worry as much because if I had the urge to check in, I could just go downstairs to the nursery. People ask me all the time if having the boys there is a distraction, but I think if the babies were at my house or in daycare, that actually would have pulled me away from my work for longer periods of time and more often. The most empowering moment of the day is when we’re all walking into the building together, singing a little song—that’s when I feel like I’m really doing it, when I feel like I have it all.

There are also trying moments when I take a big deep breath and have to remind myself I can do this. For the first five months back on the job, the babies weren’t sleeping through the night, and I was up every few hours. I remember on one particularly stressful day, I took both babies on my own to a music class over my lunch break. Moving my enormous 25-pound babies from the stroller to the car back to the stroller and into the class was backbreaking. I returned to work much later than expected on an already busy day, and all it took was one person to ask where I was for so long for me to snap. I may or may not have cried in my car. Sheer exhaustion was the prime cause for my tears, but I also felt defeated. I realized then that there was no real way to do it all—or at least not to do it all well. Looking back, this day was an important moment as a working mother: I learned that balance is the key to keeping the boat afloat. I also learned that sometimes things that sound fun may actually end up causing more stress than they’re worth. Lesson learned.

Working full time and being a mother is a constant balancing act, and while it’s impossible to be always be the best parent, wife and employee, I figure if I do all three of these things the best I can then that’s good enough for me.

When I was Rachel’s assistant, I remember watching her juggle the demands of her job with being a mom.

When I was Rachel’s assistant, I remember watching her juggle the demands of her job with being a mom. She’d come home from a business meeting dressed to the nines and immediately start making a veggie omelet for Skyler, just frying up some eggs, wearing head-to-toe Chanel. When it comes to making it look easy, I’ve truly learned from the best. I may not make my boys food in designer duds all the time, but I certainly have a real appreciation for the working-mom balance. And maybe that’s all you can hope for—maybe that’s having it all.