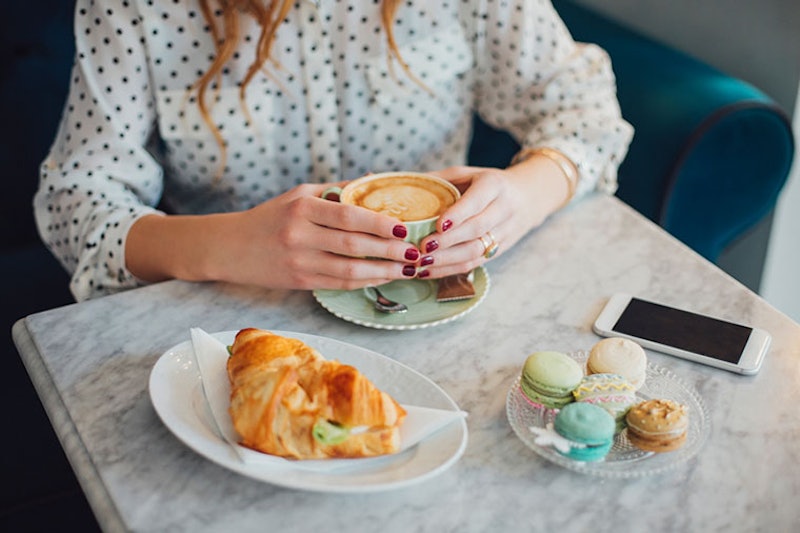 As Well+Good’s food editor, I write a lot about inflammation—and if I’ve learned anything, it’s that gluten and dairy are some of the biggest dietary offenders.

Deep down, I still want to believe there’s a way to have it all—I mean, if a Parisian can maintain a glowing complexion and a clean bill of health while still enjoying rich foods on the reg, why can’t I? So I decided to give my diet a complete 180, eat like a French woman for a week, and see how it would affect me. (Hey, it’s a tough job, but all in the name of journalism.)

Would doubling down on pastries and cheese keep me satiated and productive? Or would they make me bloated and give me brain fog?

Here’s how I fared while trying to eat like a brioche-loving French woman for 7 days.

To get some insight into the Gallic way of eating, I called Ancolie restaurant owner Chloe Vichot, a New York transplant by way of France.

For Vichot, the first meal of the day is heavy in carbs, sugar, and caffeine. (Gasp!) “I typically have coffee and a chocolate croissant for breakfast, or maybe some toast and jam,” she says.

She goes on to say that French people aren’t big snackers—unlike us Americans—but they are strong believers in a lunch break. Instead of eating over a computer at work, everyone goes out and typically eats a dish with protein, grains, and lots of vegetables. This could be in the form of a chicken sandwich loaded with veggies, or fish, rice, and salad.

She tells me dinner is similar, just a bigger portion. Oh, and Vichot has a piece of chocolate cake. Every. Single. Day. “And no, I don’t feel bad about it,” she emphasizes.

Some other guidelines: No processed food or candy, but a glass of wine at dinner—or even lunch—is totally encouraged. Hanging up the phone, I smiled to myself. This was going to be the easiest article to research and write, ever.

I eased into the first meal of my new eating plan with a slice of toast and some banana-strawberry jam. Normally, I’d freak out about how much sugar I was scarfing down, but it didn’t seem very French to analyze a nutrition label. My first thought? This is much more delicious than my usual bowl of oatmeal.

For lunch, I made myself salmon, salad, and quinoa, but for dinner I had the very American meal of leftover Chinese takeout. I had to make room in the fridge for all my new French food, I rationalized. So far, I didn’t notice too much of a change in the way I felt, other then the excitement of spending the week eating all the things I had been avoiding.

Bring On The Chocolate

On my way to work the next day, I ordered a big, flaky croissant from my corner café—something I’d eye every day while ordering my almond milk latte, but wouldn’t dream of buying. When I got to work, I quickly pulled it out of the wax wrapper and took a satisfying bite, ignoring the envious stares my coworkers were giving me. (Hey, you try eating a pastry in a room full of health editors.) Two thoughts immediately entered my mind. First, This is seriously better than oatmeal. And then, Okay, croissants are definitely not meant to be eaten over a keyboard. Flakes everywhere.

Usually I have a mid-morning snack, but the croissant held me over until lunch. (Surprising, because there isn’t any protein in it.) Keeping with the French lunch-break mentality, I met a friend and ordered a quiche and farro salad. I usually have another snack in the late afternoon, but I held out until dinner—a homemade croque madame, followed by a big, honking piece of chocolate cake and a glass of red wine. French people know how to live, I thought, licking my fork.

Hey French People - Are You All Bloated?

I woke up the next morning already thinking of my breakfast croissant, but I also felt really, well, bloated. My body was definitely not used to all this cheese and gluten. But did that deter me? No. I still got that fluffy croissant.

When lunch rolled around—quinoa, grilled chicken, and salad brought from home—I asked one of my work friends to take a break and eat with me. Her response: “Can I bring my laptop so I can answer emails at the same time?” Okay, so we haven’t exactly perfected the lunch break here in America.

Despite feeling puffy all day, I went all out with dinner, making chicken cordon bleu—with lots of Swiss cheese—and a big salad. I was rewarded for sticking to my French diet by waking up the next morning sick to my stomach. Now, instead of a croissant, all I wanted was my usual bowl of oatmeal, which I did end up making. Because I had a stomach ache, I skipped lunch, and when I met a friend for dinner, I just picked at my salad.

There certainly isn’t anything glamorous about eating like a French woman when you feel uncomfortable. I decided not to finish out the week on a diet that was clearly disagreeing with my body. And as soon as I went back to my normal way of eating, with virtually no dairy or gluten, I immediately felt better.

Is Eating A French Diet Healthy?

The next day, I called nutritionist Frances Largeman-Roth, RD. I had some big questions for her—like, why did the French diet make me so sick? “It was probably a shock to your body if you are used to eating low-FODMAP,” she tells me. “But for someone who grows up eating those foods, it isn’t anything new, so it wouldn’t affect them the same way.” So French people aren’t walking around with stomachaches. Good to know.

I also asked her why a croissant sustained me just as much as a protein-rich breakfast. “A croissant has about 400 calories, which is enough to give you energy for a few hours,” she says. But sadly, Largeman-Roth doesn’t endorse a croissant-a-day habit. “Over time your body will adjust, and then you might start crashing because of the lack of protein.”

Despite her qualms with a.m. pastries, Largeman-Roth says the French way of eating actually is healthy. When you’re consuming smaller portions, not snacking, and avoiding processed foods, it balances out those rich, high-quality desserts and moderate amounts of wine. Plus, the typical French lunch and dinner includes a good mix of protein, healthy fats, veggies, and grains, which we should all be shooting for.

Bottom line: Eating like a Frenchwoman all the time just didn’t work for my body. But I’m glad to know that if I want to have a croissant or some chocolate cake every now and then, I don’t have to stress. In fact, eating things that make you happy—in moderation, of course—might just be one of the most nourishing things of all. Très bien!

You Can Make These Super-Satisfying, Bloat-Busting Recipes In 15 Minutes (Or Less!)

Is Drinking Alcohol Actually Good For You?

Everything You Need To Know About Healthy Fats