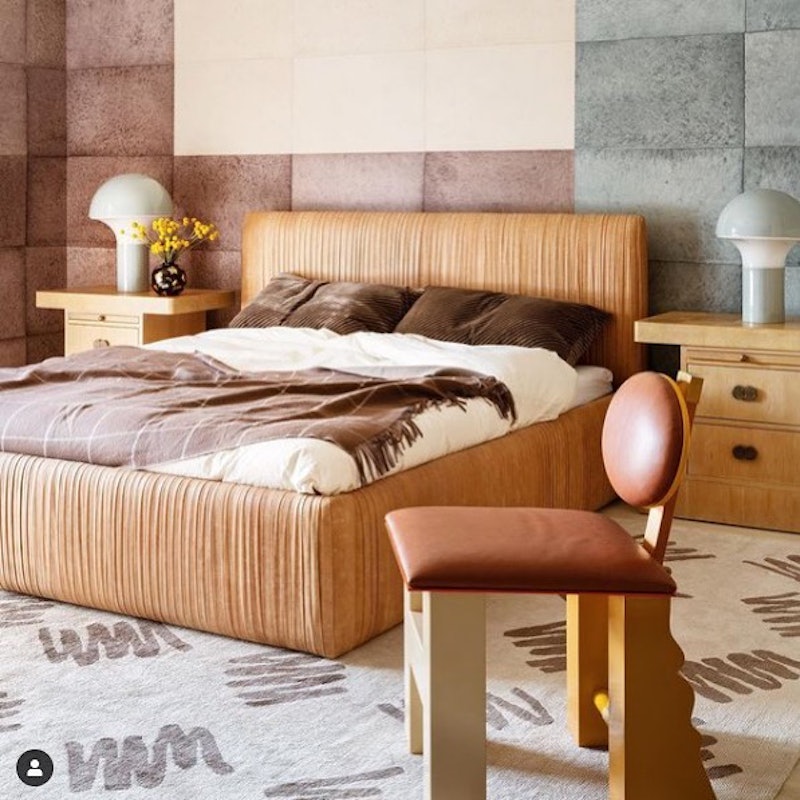 From clothing to home design, minimalism has been at the forefront of trends for the past few seasons. Versatile silhouettes and neutral tones always make for elevated style and are the perfect anchors to outfits and rooms alike. But for 2021, bolder colors and textures are coming into the spotlight to enhance the effect of simple design, including the mixed wallpaper trend. Minimalists fret not; variations run the gamut. Yes, splashy patterns and rich hues are at the crux of this wall-covering movement. But pared-back tastes can get in on the look, too. Think lighter colors and natural materials with a sumptuous feel.

“Mixing wallpaper patterns is a fun, graphic way to add visual interest to a space, but there’s definitely a right way to do it,” says Andrea Erman, product development lead at CB2. Most important? “Keep your color palettes in the same vein and mix up your scale,” she explains, such as a bold, oversized botanical motif in one room paired with a repeating smaller scale pattern in another. “Solid textures like grasscloth are also a great, neutral way to ground your pattern mixing,” Erman adds.

When choosing a wallpaper palette, Karen Robert, interior designer and founder of Aux Abris, tells TZR there are three fundamental rules to follow: Choose neighboring shades on the color wheel, opt for contrasting hues, or use a pattern with two to three colors and pull out one to highlight in the small scale pattern.

“Having a little bit of courage here can go a long way — wallpaper opens up doors that paint can’t,” Brooklyn-based interior designer Colin King tells TZR. “It adds texture and can change the way light fills a room. And it’s worth noting not all papers have to be patterned or loud. Wallpaper is a great tool to explore how a print can lend itself to the style you have, and how best to accentuate that.”

If you’re intimidated by wallpaper and think it’s too much of a commitment or concerned about tiring of it, Penny D. Francis, owner and principal designer of Eclectic Home in New Orleans, says it’s a great design material for adding personality, depth, and texture to spaces. “When selecting a paper, you need to consider it with all the other layers of materials and textiles in the space,” she says, suggesting temporary wallpaper as a low-commitment approach to the trend.

Intrigued by the mixed wallpaper trend? Keep scrolling for designer tips with an edit of styles to shop for every aesthetic.

According to Erman, small spaces are perfect for a wallpaper moment, such as a work-from-home alcove or a powder room. “Go for big-scale prints or deeper hues to warm up areas that are often overlooked,” she suggests. Another tip: “I love setting the tone for a space with a mixed wallpaper moment in the entryway and its adjacent powder room,” says Erman.

Bedrooms and their corresponding closets are also a fun place to experiment with mixed wallpaper. “[It’s] an opportunity to add that personal touch to one of your most personal spaces,” Erman says.

Beyond aesthetics, wallpaper can give room sound insulation, according to Sheryl McLean, president and creative director of the Maryland-based design firm McLean and Tircuit. “If you have a small powder room with high ceilings and all hard surfaces, you probably experience some echoing in the space. Wallpaper helps to reduce that hollow sound and cold feeling,” says McLean.

Mixed wallpaper instantly creates more interest, especially on unexpected surfaces. “Papering both the walls and the ceiling makes for a cozy yet dynamic living space,” Robert says. “Playing with pattern on pattern is essential when decorating a space that feels modern and fresh.”

For a tempered take on mixed wallpaper, Allen likes to combine patterned and neutral coverings. “I loved addressing ceilings with patterned wallpaper and the walls with [a neutral] for texture,” the designer tells TZR. “I’m careful not to use super-dark colors on standard ceiling heights, so the ceiling doesn’t feel lower and heavy.”

The Mixed Wallpaper Trend: Try It In Bedrooms & Dining Rooms

Francis says bedrooms and dining rooms are some of her favorite areas to mix patterns with wallpaper. “Mixed patterns in bedrooms can make a space feel layered and cocoon-like, while dining rooms become dramatic spaces that create amazing mood and ambiance,” she says.

The Mixed Wallpaper Trend: For A Minimalist Look

Though 2021 is moving away from minimalism, there are mixed-wallpaper options that work well for pared-back tastes. Francis says grasscloths and fabric papers in linen or jute are classic and provide a tailored look. “Their appeal can be subtle or bold depending on the weight of the texture and the color chosen,” she says.

For a minimal statement, Robert suggests starting with a large-scale pattern to make a bold statement on a wall or ceiling. Then, add a softer, smaller-scale motif in a complementary palette. “Using contrasting scales and styles is the key,” the designer says. “I could see our spare, minimalist mural, Big Abstract, on the ceiling and then a traditional floral on the walls. The two next to each other would create a super chic ‘power clash’ effect.”

Instead of a repeat pattern, Francis suggests a wallpaper mural when combining wall coverings, which you can complement with a textured solid on an opposing wall.

“Wallpaper murals can make spaces seem infinite, and textured wall-coverings like grasscloth add richness and texture to the space making it visually interesting and tactile,” Francis says. “Even the smallest of rooms can seem grander with large-scale patterns,” the designer adds, suggesting powder rooms as a starting-point for wallpaper novices before attempting larger spaces like a living room or bedroom.

Another great place to embrace print mixing with a wallpaper mural? A nursery!

The Mixed Wallpaper Trend: Ease In With A Feature Wall Or Removable Paper

If you’re nervous about wallpapering an entire room, designer Linda Allen suggests a single wallpaper feature wall with a textured ceiling. “You can create a mood with paint. However, you can create an experience with wallpaper,” she says.

A solid-textured paper with a complementary pattern is another ease-in option McLean likes to use. “It allows you to really enjoy the richness of the papers without overload,” she says.

Temporary wallpaper is another go-to approach McLean takes, which works well in rental spaces, too. “I use a removable paper if I only want to have the wall treatment for less than five to six years,” she says.

How To Mix Wallpaper: Color Is Key

Complementary colors are key when mixing prints, patterns, or textures. Still, according to King, it’s ultimately about how all of the elements speak to one another within the context of the space. “I think wallpaper looks best when it echoes a room’s existing sentiment,” King says. “In a bedroom, it might be best to keep things soft and calm, while a kid’s room can have a little more fun at play.”

Where To Avoid The Mixed Wallpaper Trend

While designers favor the mixed wallpaper trend, there are a few spaces it doesn’t work. “The living room is a space I’d recommend avoiding the wallpaper mix,” Erman says. “There’s already so much going on from an action perspective — it’s usually best to keep things simple. Focus on your statement furniture instead.”

Echoing Erman, King says, “I feel a great living space is best left at its most simple. It’s a heavy hitter in the grand scheme of things. It has a lot going on; traffic, entertainment, general use. Adding layers, even muted ones, is better achieved through other means outside of wallpaper.”

McLean and Allen both like mixing wallpapers in almost any space, except for areas where there’s a chance water could directly come in contact with the paper, like kitchens and laundry rooms. Depending on the size and layout, a full bathroom can work with wallpaper, but McLean cautions, “I would use wallpaper in a bathroom but will not recommend this if that bath has a steam shower.”