The origin story behind the McBride Sisters Wine. 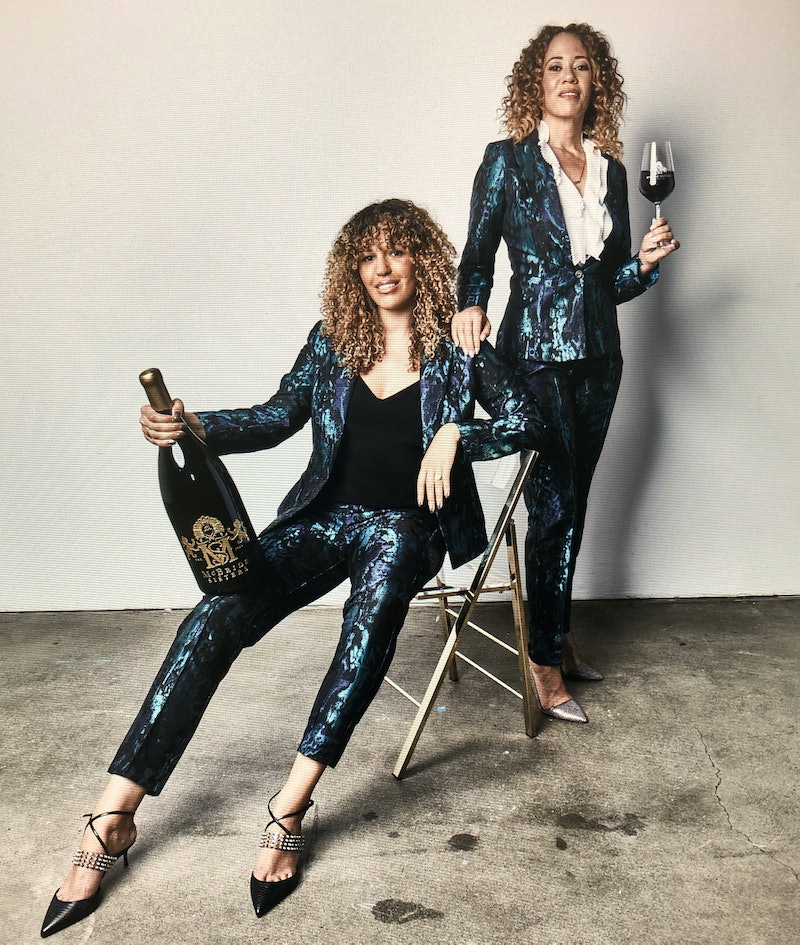 For an industry as complex as the wine industry, family-owned-and-operated businesses are commonplace. The number of family-owned wine businesses with Black individuals (let alone women) at the helm, however, is pretty rare — in fact, the Association of African American Vintners reported last year that they make up just .5% of wineries in the United States. Enter Robin McBride and Andréa McBride-John, the duo behind the eponymous Oakland, CA-based McBride Sisters wine collection. The largest Black-owned wine company in the United States, McBride Sisters can now be found everywhere from Trader Joe’s to Target, but the journey to building the thriving family business is even more impressive given that Robin and Andréa didn’t even know about one another for the first half of their lives.

If you’ve ever seen Robin and Andréa in a room together, as I was fortunate enough to mere weeks before the first wave of COVID-19 lockdowns, there’s no doubt that the women are related. Not just because they bear a striking resemblance from their trademark curls to their nearly identical smile and eyebrow shape, but the duo navigate a room in lockstep and have an unmistakable energy that is often only detectable when you’re among siblings.

According to NPR’s How I Built This podcast, the half-sisters who were coincidentally raised in wine regions located in different parts of the world — Andréa with her mother Pauline in New Zealand until Pauline died when Andréa was six and Robin with her mother Karen in Monterrey, CA — the sisters grew up unaware of the other and were each raised as an only child. Following the death of their father Kelly McBride in 1996, Kelly’s relatives, who already had a relationship with Andréa, set out to find Robin, who never had a relationship with her father or his family. While Andréa knew about Robin, Robin didn’t know she had a younger sister, much less one across the world in New Zealand, and the two eventually connected in 1999.

In meeting, the bond between Robin and Andréa was instant, and intensified when they realized they’d both grown up as often the only mixed-race children in small, mostly white agricultural communities known for producing wine. According to the Milwaukee Journal Sentinal, the two connected over their shared experiences while exploring wine regions up and down the California Coast, and before long, it became clear to the two that they wanted to turn their love of wine into a business. They initially settled on the idea of importing and selling wines from New Zealand to restaurants throughout California, a concept they pivoted and grew into the McBride Sisters collection that exists today.

Among the bestsellers of the McBride Sisters roster are the wines in the Black Girl Magic Collection, which include a bright rosé packed with notes of raspberry. The collection also includes merlot, zinfandel, and a red blend, as well as a zesty sparkling brut that’s perfect for toasting to special occasions. Black Girl Magic, the-phrase-turned movement started by Cashawn Thompson in 2013, celebrates community and the consumers that have supported McBride Sisters Collection since the beginning. “Black Girl Magic” has always been synonymous with our culture and consumers love and appreciate that,” Andréa tells TZR. “This collection is inspired by the beauty, power and resilience of Black women and offers a variety of wines to suit any palate, to be enjoyed by all.”

Andréa and Robin’s upbringing in prominent wine regions helped them to understand each other and the industry on an intimate level, but (according to How I Built This), they quickly realized that their vision of building a wine company would have to involve them making a visible effort to change the face of the wine world as a whole. Since launching McBride Sisters Collection in 2010, the entrepreneurs have been at the forefront of making wine more inclusive alongside Black-owned wine brands like Napa’s Brown Estate Vineyards, but the sisters are quick to identify where the industry falls short. “We need to dispel any ‘otherism’ around Black Americans or women in the wine industry, as too often it is assumed that they do not take wine seriously enough or do not have the same capabilities as others to have a notable palate in the industry,” Andréa says, explaining that while the wine industry has made strides in recent years, it still has a long way to go to be more reflective of the world. “It’s about getting the necessary attention from consumers and wine distributors alike to showcase how important representation is in the wine industry and how important accessibility is to wine education for all.”

Young wine drinkers and wine lovers of color are often overlooked by major wine brands, who have historically positioned wine, whether through events, marketing and messaging, to an older, white consumer. In making wine inclusive and inviting for everyone, Andréa and Robin have found a way to attract and retain a loyal consumer base that has translated from social media following to loyal, repeat customers. “Now more than ever, social media has become an important vehicle for reaching young and diverse consumers,” Andréa says. “They are looking for brands with a large social footprint, in areas including sustainability and even social justice. Often times, brands miss the mark because they aren’t reaching their target consumers correctly by meeting them where they are, or they aren’t participating in conversations and topics they are passionate about.”

The success that the McBride sisters have experienced is impressive for any business, but it’s almost unheard of in the wine world, where the barrier to entry is high financially, culturally, and socially. “We acknowledge that we alone as a company cannot change the wine industry, but it is our hope that we’ve inspired women to embark on careers in the industry and that we’ve also inspired other companies and wineries to follow suit,” Robin says to TZR.

For their part, Robin and Andréa have doubled down on supporting Black and women-owned small businesses through their SHECAN initiative. Launched in 2019, the SHECAN Fund provided support for a select number of Black-woman owned businesses across all industries hit the hardest by the pandemic in 2020, and this year, the fund will focus on professional development for women in the traditionally male-dominated fields of wine and spirits, hospitality, and finance.

To expand their reach with their consumers, the sisters launched a private Facebook group called McBride Certified: Wine 101 with Robin and Andréa, a class and community that features an eight-module course explaining the basics of wine and serves as a hub for the McBride’s most devoted fans. The duo also partnered with Simon & Schuster for the Black Girl Magic Wine and Book Club, where two Black Girl Magic wines are paired with a book from a Black woman author.

Robin and Andréa’s journey has provided them with a lifetime’s worth of insight they hope will make pursuing a career in wine a little easier for the next generation of women interested in the field. The entrepreneurs encourage women with a passion for wine to fully immerse themselves in the industry, from following brands on social media to participating in industry-related programs and conversations.

Robin and Andréa are a testament to what it means to stay ready, stay resilient, and remain open to new experiences, big and small. In staying open, you never know what—or who— you may discover.