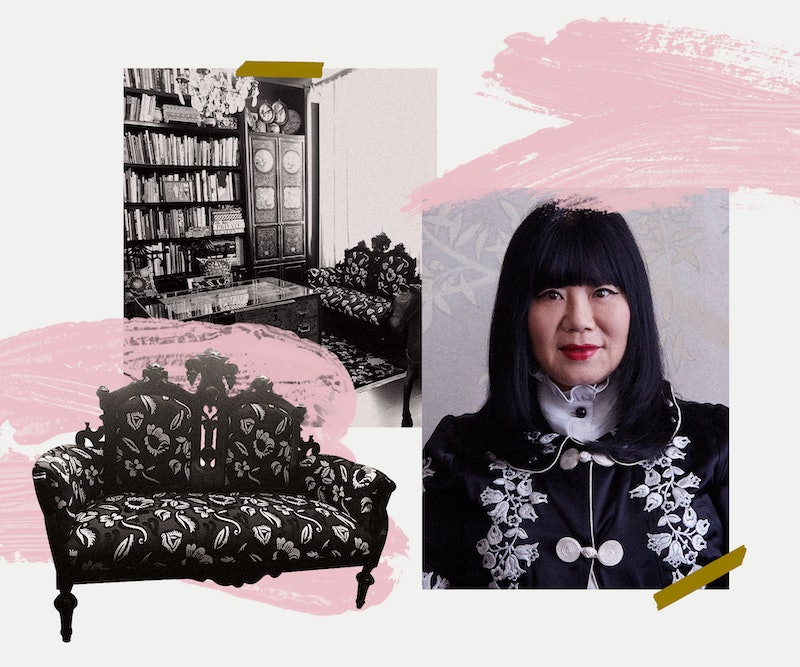 In TZR’s franchise, Interior Motives, celebrities and tastemakers discuss their unique approach to home design and how it reflects their personal aesthetic.

With an age of minimalism sweeping the design world in recent years, Anna Sui says the era of “collecting things” is sadly now gone. However, the designer — known for her whimsical and patter-filled style — doesn’t seem to count herself in the equation. Sui’s passion for vintage and art deco home decor, which translates beautifully to her elaborate Greenwich Village apartment in NYC, proves the maximalist movement is very much alive and well.

“My mother is such a collector and I think I learned it from her,” says Sui to TZR. “All my life I collected things, but then you have to have somewhere to put them. So this apartment gave me that opportunity to display everything. There’s things I got in India and Morocco and things from some of the fashion collections I’ve done.”

The flea market fanatic is correct in pointing to her apartment as a sort of menagerie of all the trinkets, furniture, and artifacts she’s picked up over the course of 30-plus-years. In fact, Sui’s current living quarters is a combination of two apartments, one of which she took over some years back (it belonged to her friend and Oscar-winning documentarian Murray Lerner).

The apartment itself oozes with the wonder of a Narnia-like labyrinth, and one will discover that no two rooms are the same. Each one has its respective aesthetic and atmosphere, tied together only by Art Deco detailing and considerable use of lush fabrics, hues, and materials. As it happens, Sui says her approach to interior design is not unlike that of a ready-to-wear collection. “When designing a room, I have these images I save of some of my favorite rooms, my favorite decorators,” she explains. “I’ll spend time in the room [I’m decorating] and it gives me a vibe. I’ll decide that it feels very Tony Duquette or very Rose Cummings. For instance, the [dining room] that has the fireplace. That fireplace was something that I found in a vintage store in Michigan in a really remote town. It was built into the wall of the shop. I convinced the owners to sell me that particular fireplace and the room kind of evolved around it. So, it can also be a particular piece of furniture or an idea that I have.”

As evidenced in her love for vintage and antique finds, Sui loves a treasure that tells a story. In fact, one of her favorite rooms in her home is her library, where she says she’s spent a significant amount of time in this past year. From the 1930s églomisé desk and chairs to the vintage reupholstered love seat that came from the apartment of a legendary Condé Nast editor, the space truly transports you to another place and time. “I love going in there and making my phone calls and spending an hour on the phone with friends,” says Sui. “That’s kind of the great thing that came out of all of this. For so long before, we never really spent much time chatting, and this way you can really catch up and there’s no distraction. And that chair is really comfortable!”

Ahead, Sui discusses her unique approach to styling a home, her favorite places to shop for vintage furniture, and tips on how to find the perfect one-of-a-kind treasure for your own sanctuary.

Talk to me about your library. What was your inspiration and approach?

I do a lot of research and I have folders of some of my favorite rooms, and Coco Chanel’s apartment is just like number one for me. I love that she took coromandel screens and I know she bought them in auction and then had them built in as walls in her apartment. So, I was looking for some inlaid coromandel screens and I came across these that had the cloisonné plates on them. I thought, Oh, this is so great — they’ll add a little bit of color! I found them on eBay and just grabbed them.

I love that you found the screens on eBay! Do you have any tips for shopping for vintage decor online?

I do a lot of shopping on eBay and Etsy and on the internet [in general]. Flea markets aren't the same anymore and so you kind of have to just research like the giant flea market of the internet. The thing is, you can learn so much by first identifying [an item like] the screen as ‘coromandel.’ And then look at the different ones using that key word to teach you and also bring you to something that's unique. Like, you might want it with figures on it, or flowers, or pottery. So I think that you will learn as you're looking and researching, and then that helps you zero in on what it is that you're actually wanting.

Let’s talk about your desk, which I know also has an interesting story.

Yes, it’s a partner desk. So there are two chairs that face each other and the backs of the seats are mirrored and églomisé — which means it's painted underneath the glass — and it's Art Deco. I had seen it at a store on Lexington [Ave.] called Elle W Collection [by Lorraine Wohl]. They always had the most beautiful mirrored furniture. I had seen this desk before and, of course, I couldn't afford it. I remember saying, ‘Oh my god, that's the most beautiful mirrored piece of furniture I've ever seen.’ So [the owner] called me when she was closing the store and that's why I was able to afford it. She gave me a price that I couldn't refuse! And now it’s just such a treasure and I love that it has those plexiglass handles on it. It's just so Art Deco.

Now, I know the accent chair in the library is also very special to you. Tell me about that.

It belonged to a very legendary editor, Leo Lerman, who worked at Condé Nast for years and years. He worked at Mademoiselle, Vanity Fair and he was quite connected. Some of his best friends were Maria Callas and Marlene Dietrich and he had legendary parties where everyone in New York would attend. He lived in The Osborne, which is on 57th Street and Seventh Avenue. I was actually invited to a Halloween party there after he had passed away. His partner, who was a famous artist, Gray Foy, was hosting.

If you only saw this apartment! Every table surface and bookshelf was filled with collections of things. And on top of all that it was all decorated for Halloween. So, it was just kind of like a fantasy for me, because I think that it’s from an era that's now gone, of people that collect like that. Obviously, [Lerman] spent years going to flea markets and antique stores. So that chair I believe is what’s called American Federal-style [architecture], but I have to look it up. It was at the foot of a bed of one of his bedrooms and it was covered in horse hair. But, I have this fabric that’s like cut velvet and it almost matches the pattern on the desk. So, I had the chair reupholstered in this cut velvet.

How did you actually get your hands on that chair you spotted at a party years before?

It was at an auction at Doyle. When I had seen the chair at [Lerman’s] apartment I fell in love with it. And then when it showed up in the auction, I thought, OK, I want it. And it turned out that no one else bid on it! So that worked out.

I know you’ve mentioned you love to pick up things while traveling. Is there a particular place or city that is especially inspiring from a design perspective?

I’ve traveled a lot to Japan and China, and I’ve been lucky enough to go to South Asia. One of my favorite flea markets is in Jakarta where everything is just so exotic. I love researching before I go to a city that I’ve never been to. I like to find out if they have a flea market because that’s where you find things of that culture.

How would you describe your own personal aesthetic and how does that trickle down to your home design approach?

This apartment, to me, is like [the film] Auntie Mame. I don’t know if you’ve ever seen the Rosalind Russell version, but when I see her apartment, especially her chinoiserie apartment, I can’t believe how much [my home] is like that movie set. It must have been very subliminal because I didn’t really study pictures of her apartment.

Did this past year indoors change your perspective on the interior of your apartment at all? Did it make you prioritize certain things in the name of practicality?

I think we’ve all consumed more TV than we ever have before. So, that became kind of another focal point — which room I would spend the most time in watching TV. I also started cooking myself, which I never really did before. So, I spent more time in the kitchen. I’ve worked since I was a teenager and was never really home much, so it was kind of a treat to be able to be home. I became very obsessive about it. I reorganized every closet, every drawer. Everything is super organized right now.

Are there any affordable retailers you buy from occasionally?

There’s one chest of drawers I actually got from Wayfair. I was going to buy an art deco one and it was just so pricey. I thought, This one [from Wayfair] looks just as nice. You just never know where you’re going to find something. And sometimes it’s more practical [to go more affordable]. A lot of vintage stuff is just too fragile.