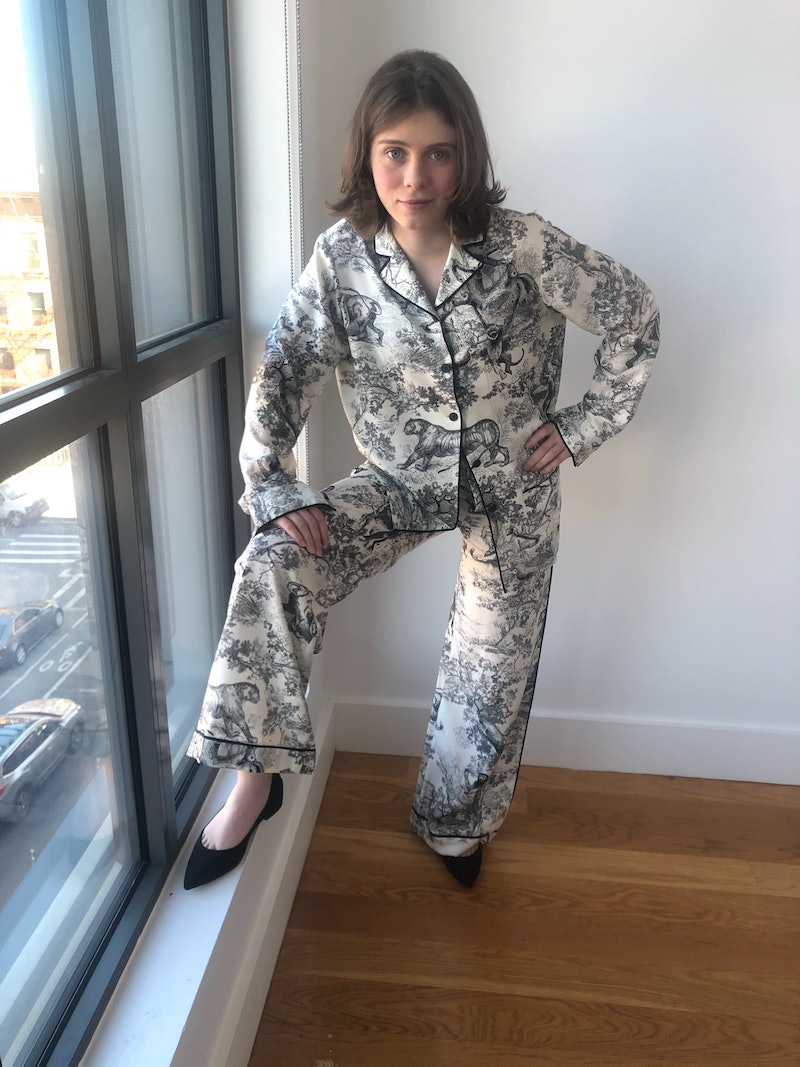 Getting ready to sit front row at a fashion show is a process that might typically take hours. But, when you’re tuning in to a show in Paris from across the ocean, it’s a different set of rules. “I mentioned that 8:30 a.m. (the time when the show airs in NY) is kinda early to be getting dressed up and I would usually still be in pajamas,” explains actor Sophia Lillis in regards to Dior’s Fall 2021 show. So, instead of a ball gown or three-piece suit, Lillis, the star of Netflix’s I Am Not Okay With This, went with what was familiar (yet fancy) — Dior pajamas. “Really nice ones with animals on them,” she adds. “Much nicer than my regular flannel ones. And they sent me shoes, which I normally wouldn’t wear with pajamas but the pointy flats with the hearts on them were so fun I made an exception.”

Taking all the COVID precautions, Lillis tuned into Dior’s show from her apartment in Brooklyn in lieu of finding a spot in the traditional stadium the iconic French fashion house is known for. “My favorite thing about my apartment is that there’s a grocery store downstairs so I don’t have to go that far to get food,” she explains noting that since the show coincided with her usual breakfast time, she was able to enjoy both at once. “Tea and a bagel with whitefish salad,” she notes of her daily meal.

Over the last few months of quarantine, Lillis has been making the most of her time at home, taking up hobbies. “I watch a lot of movies,” she explains. “Draw little sketches for my friends. I’m in a [Dungeons & Dragons] group with some friends so we play once a week or so if everyone’s not too busy.” She’s also committed to picking up a new skill: “I’ve decided to finally learn how to do a cartwheel.”

And while, like many, Lillis has found herself drawn to more casual dress, her time in quarantine has also sparked her creativity when it comes to her style. Explaining that her uniform is “sweatpants mostly, unless I have to go out. Then, I get dressed up, which I normally wouldn’t, just to wear something different.”

Though Lillis — who was recently confirmed to star in the upcoming Dungeons & Dragons film alongside Hugh Grant and Chris Pine — is unwilling to give up her comfy separates anytime soon, (“I love sweatpants”) she has found herself missing some of her old dressing habits from the pre-pandemic era. “I’m not sure what the fashion trends are right now,” she says. “I miss hats. I love to wear hats, but since I’m inside so much I don’t really get to wear them. I have some nice spring hats, so hopefully in a few months?”