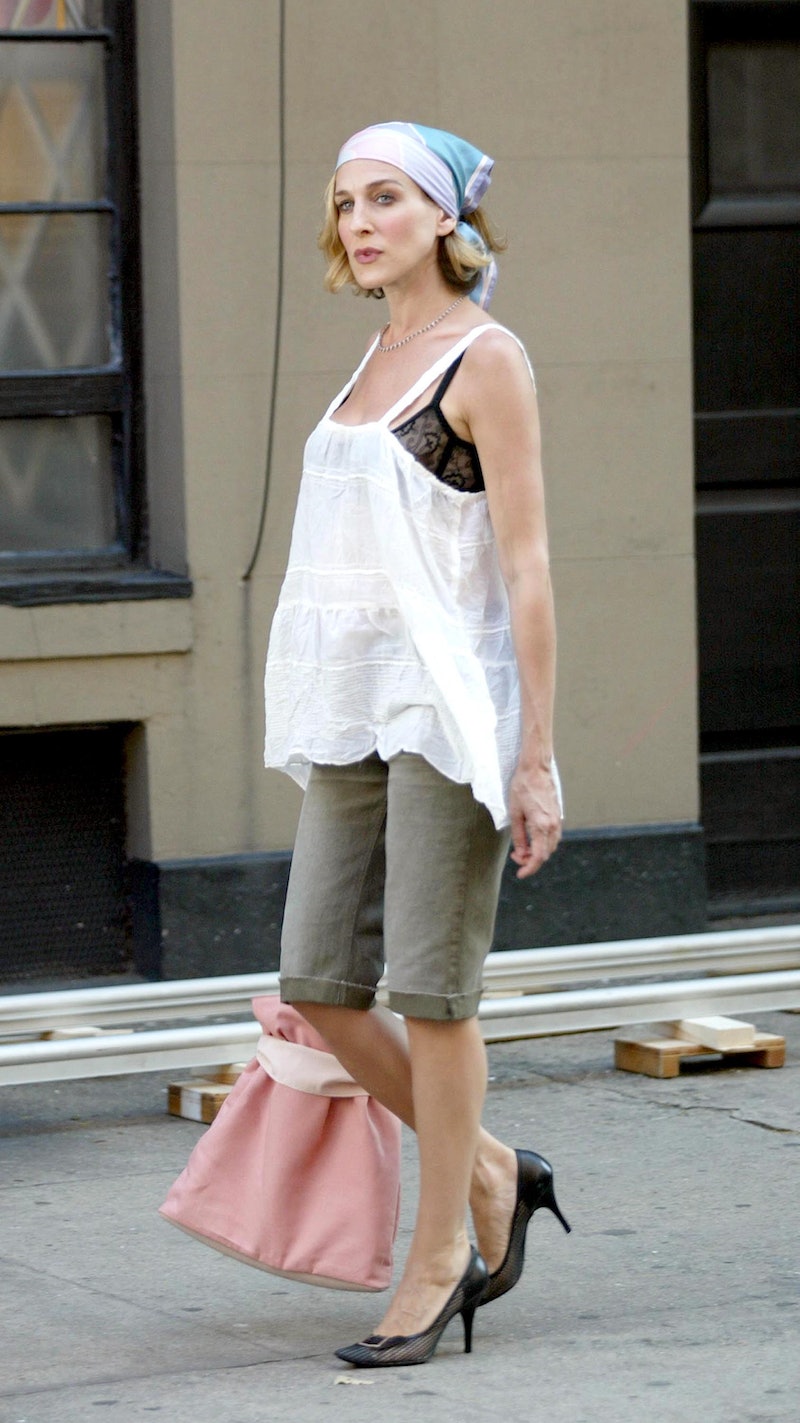 There’s no doubt that Hollywood’s red carpets are always something to keep an eye on when it comes to jaw-dropping ensembles. However, for the everyday outfits you can actually wear, you probably turn to the television and movie screens for inspiration — and if there’s one character that’ll be forever remembered as one of the most fashion-forward women to grace the small screen with her sartorial choices, it’s none other than Sex And The City's Carrie Bradshaw. Even in 2020, actor Sarah Jessica Parker's outfit feels like a nod to Bradshaw decades after she stepped into those first pair of Manolo Blahniks.

Carrie Bradshaw's Dior news print dress or the tulle style she wore in Paris may be her most memorable looks, but thanks to the show's stylist Patricia Field, even her errand-running looks had a chaotically cool aesthetic. More often than not, these were the ensembles that felt more accessible to the real world outside of Carrie Bradshaw’s New York — and it’s these looks that have led many, including the actor who originated the role, to recreate a Bradshaw-approved look on their own.

The 55-year-old Divorce star and designer was spotted channeling her iconic character in New York City on June 20 as she was leaving for a family outing with husband Matthew Broderick. Parker styled a drop-waist white midi dress with a gray cardigan, accessorizing her look with SJP x Sunglasses Hut sunglasses — which are on sale for $102.90 — and a blue bandana as a face covering. The A-list star completed her ensemble with the Ursula Sandals from her line, SJP by Sarah Jessica Parker, which are available for $219 and gave her outfit that SATC appeal. The ensemble takes sophisticated staples and mixes them in a way that feels refreshingly laid-back.

Parker’s weekend ensemble feels reminiscent of an outfit she wore as Carrie Bradshaw during an episode of the classic HBO show from 2003. On set, the actor donned a flowy boho-inspired tunic and relaxed gray jeans with a pink cardigan layered on top for a pop of color. The look was finished off with a scarf in Parker’s hair and lime green peep-toe pumps, touching on some of the biggest accessory trends of the time.

If you want to create a Carrie Bradshaw-inspired look like Parker, scroll down to shop pieces inspired by the actor’s look below.