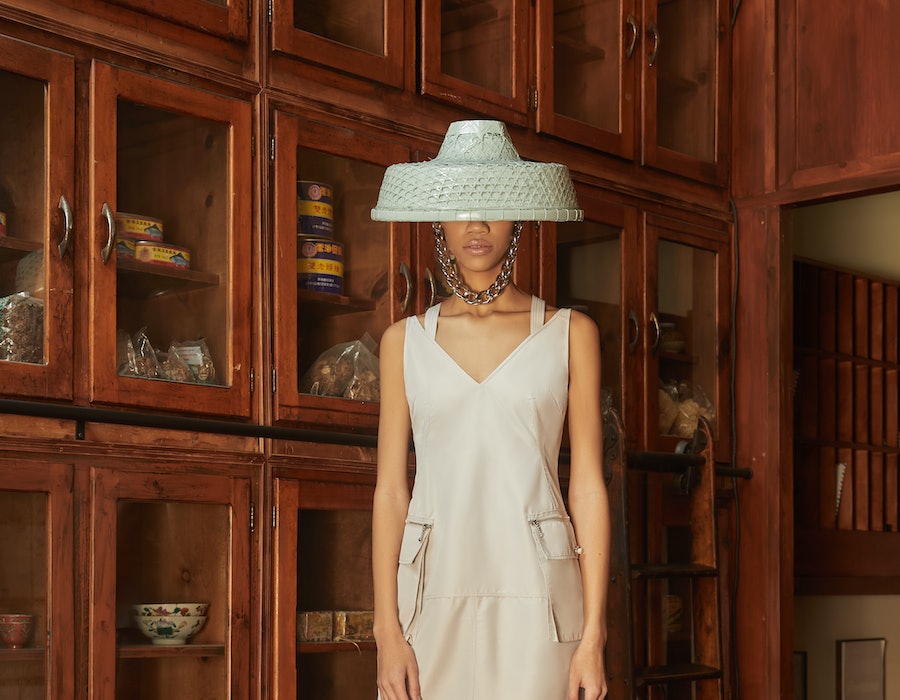 Every season, designers present a theme that inspired their collection. For its Fall/Winter 2021 show, PRIVATE POLICY explored the stories of the Chinese workers who helped build the Transcontinental Railroad (a transportation feat in the 1860s that linked the United States from east to west). Creative Directors Haoran Li and Siying Qu, who have a history of addressing various social issues in their collections — last winter the commentary was on Big Pharma — selected this topic of discourse to pay tribute to the Chinese workers and to acknowledge their untold triumphs and hardships as foreigners in America. In doing this, Li and Qu also addressed the xenophobic feelings of that era, which mirror similar anti-Asian sentiments today due to the COVID-19 pandemic being perceived as the "China virus."

"Haoran and I have been closely working with the Asian community to talk abut Asian-American issues throughout the years, from bubble tea to perceived stereotypes about [the group]," says Qu to TZR. "We were researching the emigration of Asians to America and this story of the Transcontinental Railroad stood out to us because we haven't heard much about [the Chinese workers]. When you dig a little deeper though, you're like 'wow, what an epic story.'"

Qu acknowledges that in their research, the plight of the Chinese workers were often forgotten or not explored in-depth by American textbooks. For those who need a high school history course refresher: hundreds of thousands of Chinese men arrived to the states for California's Gold Rush in the late 1840s and were subsequently employed to build the Transcontinental Railroad, which took six years, from 1863 to 1869, to complete. For Qu and Li, it was important to tell the Chinese workers' stories from this era through a lens they knew best: fashion.

The two, according to a statement, were "inspired by the railroad workers' layering style and the mix of eastern and western clothing based on functionality." The creative directors incorporated reworked Chinese stylistic elements like the mandarin collar and knot buttons into their Fall/Winter 2021 looks. In speaking about functionality, straw hats, nearly identical to the one the Chinese workers wore, became a pivotal statement accessory in the collection as you'll see below. "We think of our brand as a news outlet," Qu says. "We want to evoke some thoughts and action. Our goal is to start a conversation with each collection."

Qu shares that her and Li started working on the Fall/Winter 2021 collection a year ago. The collection's release today and its theme could not be more pertinent as the surge in xenophobic feelings and hate crimes on the Asian community have gained new traction and light in the media over the last few weeks. Ahead, Qu shares with TZR more details about PRIVATE POLICY's latest collection and her thoughts on speaking up for the Asian American community right now.

What kind of research went into creating the Fall/Winter 2021 collection?

We were so honored to partner with the Museum of Chinese in America in New York City. They provided us with so much resources for our research. MOCA provided us with books like Gordon H. Chang's Ghosts of Gold Mountain; we watched documentaries and read all the articles we could find [about the Chinese workers building the Transcontinental Railroad]. Even more than a century later, the study [on the Chinese workers] by Chang at Stanford University is the only historian-based research done on this subject.

Can you describe the symbolisms in the collection, like the hats and the buttons?

We found all these amazing images of the Chinese Transcontinental Railroad workers and noticed how they dressed for work. They mixed local clothes from the west with pieces from the east, like the hats. We were conscious about the hats because in Europe and parts of America, these hats [have been historically] linked to the idea of poverty and hard labor, so we thought 'How can we change this stereotype?' When [Haoran and I] see the hats, we feel they symbolize the hard work the Chinese workers did, the amazing things they overcame to build this railroad, and life they made for themselves in a foreign country. The straw hats in the Fall/Winter 2021 collection are braided and made from a plant that grows on the Pearl River Delta [in China] then spray painted with the product we use on our leather bags.

We also noticed a lot of quilting details and layered clothing [worn by the workers] in the images. We created our own buttons inspired the Chinese coin design [mixed with elements] from the qipao. We tried to think of how to bring together PRIVATE POLICY's New York City club kid culture look with the 1860s Chinese workers' clothing. We used a lot of silver hardware throughout the collection [as a nod] to the DNA of PRIVATE POLICY and the palette of the collection goes back to our brand's aesthetic of mixing neutrals together along with some pops of pink and minty green.

Why did you decide to shoot the outfits on an all-Asian cast and at MOCA?

We decided to [have an Asian cast] because you'll start to realize that when looking for Asian models, especially male Asian models, there's not that many represented on agency websites. Another difficulty we faced, because of the COVID-19 pandemic, was finding Asian models who lived between America and Asia, since a lot of them went back home to be with their families. We went on Instagram and looked through hashtags and emojis to find our models like Symone Lu and Carty Li.

We had the privilege to use the whole museum for shooting, so that we can spread out for social distancing. The room in MOCA that we took the lookbook photos in is called the general store. This room is so cool and so amazing because it [contains] items collected from different stores in Chinatowns across America. The [idea of a] general store, too, linked back with the Transcontinental Railroad story because [it was here that] Chinese workers sent letters and money back home to their families.

What xenophobic experiences have you faced and how did that influence this collection?

I grew up in China and then came to America as a cultural exchange student in high school, so I spent my sophomore year to senior year in this little town called Goldsboro in North Carolina. I really had that experience of being the only Chinese kid in the whole school and one of two Asian kids in the entire school. American history was one of my favorite classes in high school, but I [don't recall learning about] the Chinese workers building the Transcontinental Railroad and what that meant for America.

I then moved to New York City to go to Parsons [School of Design] and it seemed like a different world because the population of Asians here is 13 percent and there's a Chinatown. Everything seemed great. Then I started hearing from the Asian American community about how we were perceived and the micro-aggressions [we've all experienced]. Now COVID-19 [has only intensified xenophobic feelings] and the violence against the Asian community — [a situation] Haoran and I need to use our voices to talk about. That's why we chose the Transcontinental Railroad story for this season. The story is interesting enough on its own, but we hope [the collection] will inspire people to feel proud to be Asian.

Do you think the fashion community is doing enough to address the xenophobia against the Asian community in the past year/last few weeks?

Within fashion, even if no one else is talking about it, just from me talking about our collection's inspiration, which everyone will ask, we can address the current issues, so there's a way to get the word out there and gain support. I think a lot of people don't know [about the recent attacks on Asians]. I have a buyer in London and he was like what is this [statistic about] anti-Asian hate crimes jumping to 1,900 percent, so I think people are just starting to discover what is happening. We, being part of the Asian community, just try to be as loud as we can and I hope the conversation [addressing xenophobia during the pandemic] creates a ripple effect so that organizations with even bigger platforms can share.

How are you staying hopeful and positive in 2021?

I think this time I learned how to breathe better. In fashion, sometimes one thing can make you so stressed out. Breathe and count the seconds. I think one other thing that helped me and Haoran personally during the pandemic was to research the Chinese workers stories from the Transcontinental Railroad. We learned so much from this experience and it showed us a better perspective of who we are, who came before us, and what they have achieved. The stories from Ghosts of Gold Mountain are so epic and ordinary in a way. They are very similar to other immigrant stories we have heard about or have experienced. I think the Transcontinental Railroad Chinese story is inspirational and uplifting. If they can build a railroad in a desert [against all the adversities], we, too, can [persevere].