This season, Nicolas Ghesquière gets graphic. 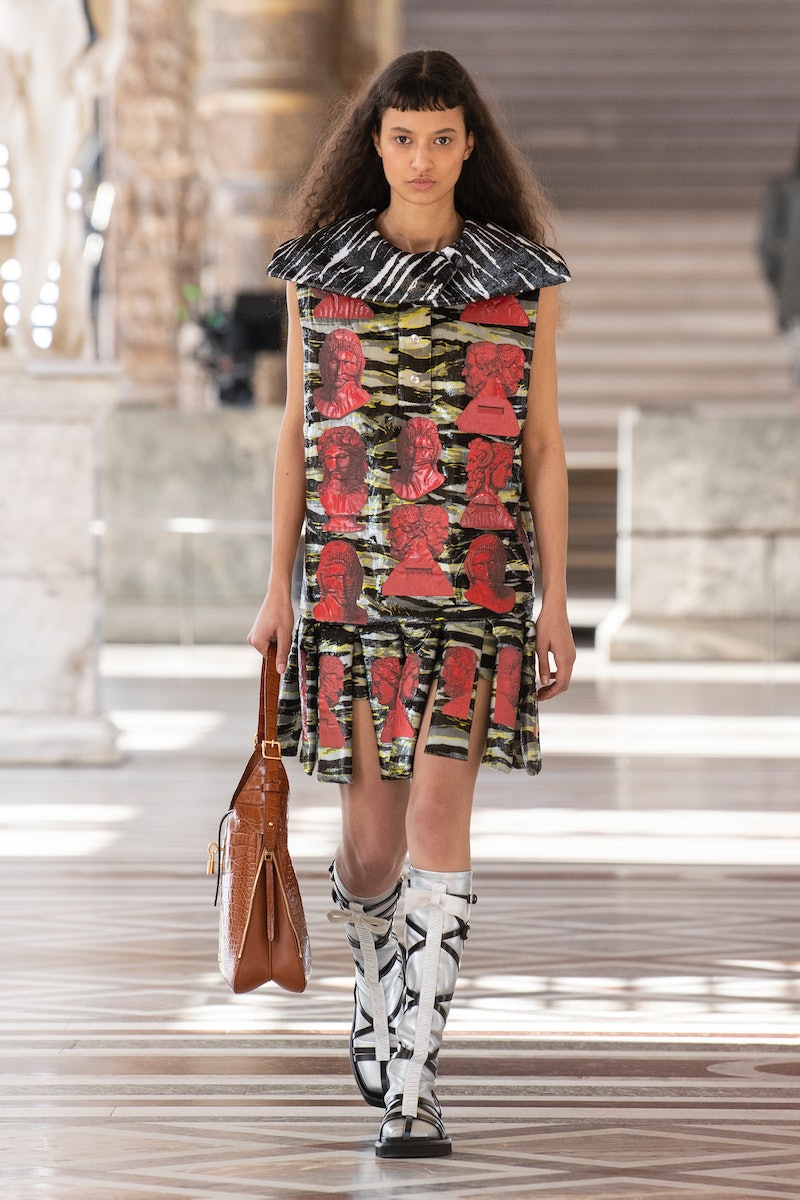 The halls of Paris’ Louvre museum were a fitting backdrop for Louis Vuitton’s Fall/Winter 2021 collection — a playful season centered around art and history. Nicolas Ghesquière, who has held the title of artistic director of womenswear since 2013, often reaches for references that span both time and topics, last season bringing together Gen-Z aesthetics with Wim Wenders. For fall, the notion of escapism offered a starting point for Ghesquière. When there’s no traveling to be done, getting away means diving into the creative.

As part of the March 10 show, Vuitton launched an ongoing creative collaboration with the Italian art atelier Fornasetti, with a broader scope of work to follow this debut. “As a designer who has always loved fashion’s ability to evoke the past, present, and future simultaneously, I wanted to add new layers to this creative palimpsest,” Ghesquière said via press release announcing the partnership. “Exploring the Fornasetti archives had the excitement of an archaeological dig, searching for and finding drawings from the past to give them new life.”

Through both the graphic stamp of Fornasetti prints (splashed colorfully across both the clothing and accessories) and the plays with volume and perspective throughout the collection, Ghesquière creates a new fall uniform. Going beyond the use of Fornasetti’s art in the new collection, the principles of the artist are interpreted over again. As the creative often used Greek and Roman art, applying it into a modern context, so too did Ghesquière look back through the centuries, bringing ancient principles — like the soft contrapposto stance of marble statues — into his work in 2021.

It offers an invitation to push aside functionality for its own sake, and instead, consider how throughout history clothing has not only offered protection but an opportunity to imagine. Voluminous tulle skirts and oversized layers may not feel obviously practical, but for those fashion insiders starved for opportunities to play with their personal style, this collection is permission to do as you please.

This all might feel a bit cerebral (and it is!), but it is where Ghesquière excels, not making clothing that is overtly trendy, but is instead experimental and daring. Look to the slouchy boots and leather sock-sandals models wore on the runway as an example — they may not be inherently easy to style, but for fashion insiders, it’s the challenge of creating that makes them a must-have. And while ski goggles and duffle bags are a reminder that real vacationing will return, the collection serves as an escape all its own.