Founder Jasmin Larian reflects on the brand’s signature designs ahead of its 10-year anniversary. 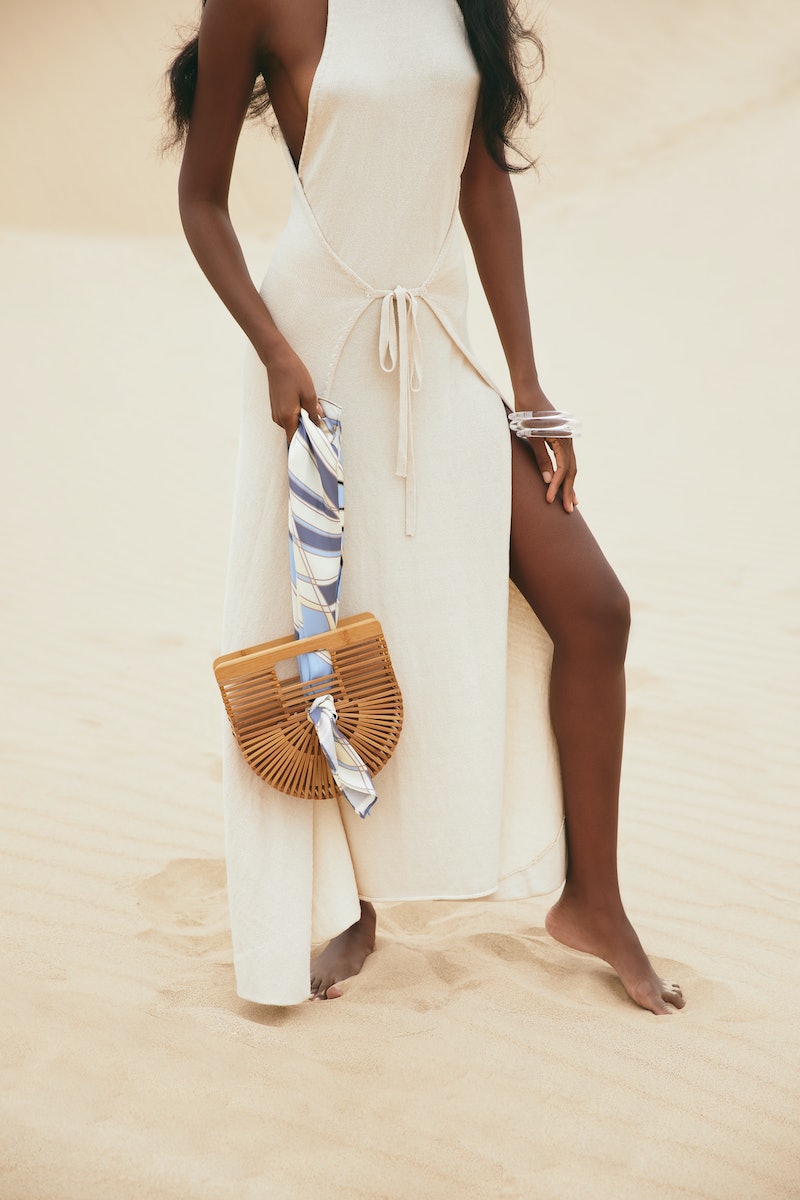 The year was 2016 and everyone had to get their hands on Cult Gaia's highly-coveted Ark bag. The structured half-moon design was quickly copied, with similar silhouettes popping up on Etsy and from fast-fashion brands, but they were never able to nail designer Jasmin Larian’s knack for creating objects d’art. The true essence of Cult Gaia’s icons, the brand's core designs from the last decade which are now being reissued, is hard to duplicate. Today, as the label approaches its 10-year anniversary, it’s worth taking time to reflect on how the brand changed the accessories market for the better.

The California-based label was founded in 2011 as a way for Larian to bridge the (very small) gap between fashion and art — with a focus on accessories. “When I first started Cult Gaia, I wanted to make pieces that were full of magic,” the creative director tells TZR. “To design for the moving eye and create beautiful heirloom pieces that will live in your closet for a lifetime.” The designer’s collections over the past decade, with a graceful evolution into ready-to-wear in 2017 and then footwear the following year, have continued to follow this framework. “Everything has to have somewhat of an architectural, organic quality about it”, Larian adds. “You [can] see it in our ready-to-wear, shoes, and bags." This approach to design is evident in styles like the Ark bag, but can also be found in the sculpturesque, slip-on Tao sandals and flower-inspired Calla earrings.

For Spring/Summer 2021, the brand stayed true to its artfully-chic aesthetic, however it didn’t come without a few caveats to fit a new norm. “Our approach to designing amidst the pandemic was to really consider our changing relationship with clothes and the way they make us feel,” Larian divulges. “Dressing up has always been a joyous act and especially given this past year, people want to feel beautiful and powerful and those are exactly the type of garments that Spring ‘21 is all about.” Inspired by natural elements, the new collection is described by the designer as “imperfectly perfect,” focusing on neutral tones and easy silhouettes. “The backdrop of the dunes symbolizes a collective departure from 2020 and a celebration as we enter into 2021”, she reveals about the lookbook images, shot in the desert in September 2020. “The textures, colors, shapes, and fabrics that makeup spring mimic the power and complexity of our environment.”

Between the viral Ark bag, glass-heel slippers, and the criss-cross knit dress that was all over Instagram last summer, the brand has had its fair share of trend-leading designs. But arguably one of the best parts about the self-proclaimed forever pieces is that they have the power to transcend seasons and trends, seamlessly, regardless of how of-the-moment they may seem at first. If you’re not yet convinced, below is a shortlist of the brand’s most iconic styles of the years with updated iterations currently available to purchase.

If you keep up with the latest trends then you know that Cult Gaia’s Ark Bag was everywhere in 2015. But for the designer herself, it was a slow ignition that led to a full-blown phenomenon, seemingly out of no-where. “When we initially launched the Ark bag, it didn’t actually begin to sell until a couple years later,” Larian reveals. “At the time, people told us that they really loved how different and structural the bag was, but they didn’t think they could pull it off in real life. But once it picked up steam through Instagram, people began to see it as a piece of wearable art, something that people in the streets would stop them and ask, ‘where did you get that’.”

In the wake of the Ark bag’s popularity, Cult Gaia’s suspended pearl clutch was set to be a new fan favorite. The acrylic design had the brand’s distinct artistic feel and for the times, it was considered so unique that it climbed to the top of every influencer’s shopping list. The spherical style first made its debut back in 2019 and has become a core piece in the label’s collections ever since. Make note of the unconventionally-placed handle, which is meant to sit over the wrist in a cuff-like manner.

The three-dimensional bulbous details are what sets Cult Gaia’s Eos design apart from traditional box clutches. The sizable interior is fully lined in a grosgrain cloth to protect valuables stored inside. For those who want a more modern take, Spring ‘21 gave way to a multi-colored printed style found throughout the rest of the collection, which is available for pre-order, below.

Designer Jasmin Larian’s affinity for art is clearly displayed in Cult Gaia’s strappy sandals. The glass-like heel has been a brand signature since the label ventured into footwear with trendy updates made along the way. Seasons later the shoe still remains as one of their most recognized designs out on the streets. To give the famed shoe a newer feel, you can now find styles with art instead of the spherical heel – i.e. a shell or dainty flower.

A more season-friendly design, the Alia mule is made with the same architectural heel found on the Jila sandal, but swaps the open square-toe for a pointed closed-toe instead. Suited to be worn with everything from denim to a summer dress, the sleek silhouette is quite versatile. To align with the theme of nature running through the brand’s Spring ‘21 collection, the mules were given a Raffia update.

Cult Gaia’s Mala top is one of those styles that has the power to become a trend-starter all on its own. Designed with exaggerated proportions that create a fan shape, the silhouette has served as a blueprint for fast-fashion brands all over Instagram. The key to pulling off this style is keeping the rest of the look pared-back — think straight-cut jeans or tailored slacks.

A design loved by the creative director for its ability to “make women feel like a million bucks,” the Shannon dress may not be everyday practical, but serves as a must in every well-dressed woman’s wardrobe. “My favorite pieces all share a common thread, full of soul and inspired by women,” Larian reveals. The dress comes in a range of colors, which includes everything from aqua blue to black, and now white for the new season.

Even in the midst of a global pandemic, Cult Gaia proves that its designs are among some of the most coveted on the market. As a part of the Spring ‘20 lineup, the tan-colored dress went viral after being spotted on muses of the industry, like Hailey Baldwin, Rosie Huntington Whitely, and Candice Swanepoel. For the new season, the brand is bringing the style back in a range of equally chic colors, ensuring customers will want to have them all.