See what they prefer. 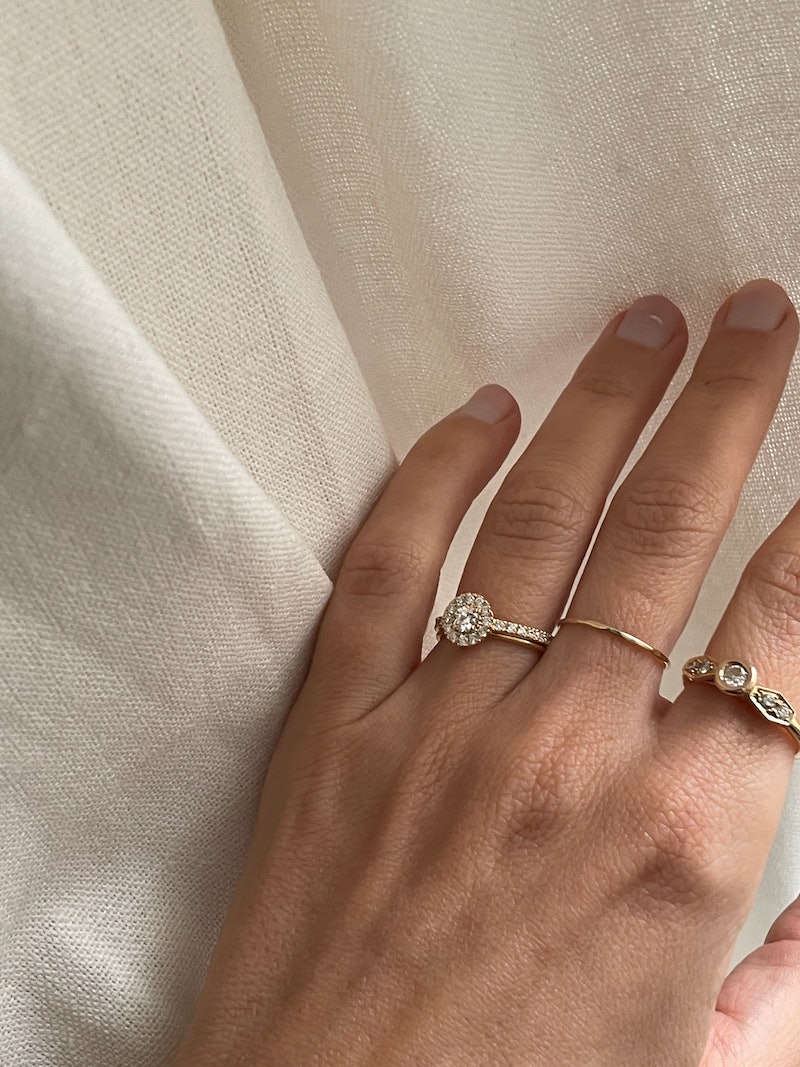 Should you go hunting for the top French engagement ring trends, you might conclude that the concept is a bit of an oxymoron. At least that’s what can be deduced after conversations with several French women, including those who work in the jewelry industry. Where ready-to-wear fashion is always rotating through silhouettes and colors of the moment, the six insiders are shedding some light on how the trend cycle spins a bit slower when it comes to engagement rings. Should a woman choose to wear one at all, that is.

Some obvious themes jump out from these discussions: discretion, heirlooms, and — like the rest of the fashion industry in 2021 — sustainability and transparency are most relevant when it comes to French engagement rings today. While the designs themselves tend to lean a bit more traditional and pared-back, each woman's approach toward choosing one remains unique and quite modern, depending on who you ask. Still, across the board one thing's for sure: Extravagant, multi-carat diamonds aren't the holy grail.

“It's not really a competition for who has the biggest diamond,” says stylist and founder of Paradise Garage, Estelle Chemouny. “We appreciate more rings designed by the husband or which have a history, like a family ring. In comparison, I see American girls are more into the biggest diamond, the coolest.” Ahead, discover more on the biggest differences between French and American engagement ring culture, and shop the go-to styles according to French women.

“In France, the preferred engagement ring is a solitaire diamond set in white metal (either 18K white gold or platinum) or a pavé band,” says Catherine Sarr of Almasika. French-born Sarr, whose fine jewelry line operates between Paris and Chicago, describes the choice silhouette for French women as one that's similar to what’s considered most classic in the U.S., too.

“The solitaire remains the ultimate engagement ring because it is refined and has a really elegant line,” echoes Franny of @frannfyne and founder of vintage retailer Yomokoï, adding. “It should also be taken into account that the choice of rings varies according to the personalities. Some like it when it's imposing, or very bling, but more often than not, discretion comes first. Typically, the ring is a thin, solid ring designed to showcase the stone or the ring may be surrounded by diamonds.”

Clear diamonds are the most popular choice but following close behind is the colorful stone. “Sixty percent choose a beautiful diamond and the rest colored stones,” estimates co-founder and creator of Manal, Manal Radouane. “Parisian girls like a vintage-colored ring with a subtle modern touch. Our ring Café de Paris is the perfect example with a beautiful emerald water mint color — our best seller that we are proud of.”

Sarr also adds that colorful stones work especially well with customers who choose to repurpose a family ring. “Resetting a family heirloom is also very popular in France, especially with traditional affluent families, and for this clientele, the stone can often be other precious gemstones such as sapphires and rubies,” Sarr shares.

When it comes to other silhouettes French customers look for, designer Sarr confirms that halo settings are popular. With small stones circling one larger stone, this style is a bit more ornate than a solitaire ring but is still considered a classic.

“I would say it is quite traditional,” say influencers and founder of Musier Paris, Anne-Laure Mais Moreau whose husband proposed with a yellow gold halo ring with smaller diamonds around the band, as well. “I like it because it is very simple, not too big (I don’t really like big rings and big diamonds), and it fits perfectly with my other rings that I wear every day of my life.”

“I have been pleasantly surprised by the number of women who have commissioned a reinterpretation of my existing designs for their engagement ring,” says Sarr of less conventional ring styles that are catching on. “My Berceau stacked rings are worn by women who aren’t looking for a traditional solitaire, and the Universum ring,” — a sculpted ring composed of concentric circles with a diamond in the center — “which is now a popular choice for engagement, was designed as part of our Sagesse collection.”

For Chemouny, an alternative ring was the way to go, as well. “My husband proposed to me and I did not realize he actually proposed. We were in London, I was eating a burger with a mask on my face and he said something like ‘I want to be your husband,’” shares the South-of-France native. “I’ve never been into weddings because my parents never married so it was not a big deal for me. At the time he did not have a ring. He found a cool designer who made an incredible diamond ring but I hated it. Too shiny for me. We went together to a store I like and picked a Jacquie Aiche ring made of onyx and diamond. It's cool and does not look like an engagement ring! It’s very me, not very conventional.”

By far the most common theme among the women featured here is subtly, especially when it comes to French women’s perceptions of engagement rings in the U.S. Designer Radouane states that the biggest difference she sees between American and French engagement rings is size. “French women like medium diamonds, elegant and discreet — around 0.70-carat weight,” she explains. “Most Americans will not consider a diamond under one carat.”

“There are two other trends that I am seeing increasingly in France but also globally,” says Sarr, citing the first as the aforementioned alternative style, “and the appeal for rings with strong sustainable traceability.”

To Sarr’s point, the demand and need for greater transparency extend well beyond jewelry, even fashion, as consumers begin to shop more thoughtfully. Her brand, Almasika, meets this need with its use of natural and conflict-free diamonds. Meanwhile, Manal also operates responsibly through its exclusive use of recycled 18 karat gold and diamonds certified by the Kimberley Process, an international certification for conflict-free diamonds.

“More than ever, ethics are mentioned when choosing the ring — how and where it is made, where the materials used come from,” says Franny on the topic. “The French are also very invested in the creation of their rings,” she adds, stating that women will often look for sites and designers that offer customization options.

In addition to diving into specific examples of popular engagement rings, it’s worth noting that, like most other significant milestones, wedding proposals come with traditions in France. But following them is completely at the discretion of the individual. “There is no longer a tradition about it, sometimes couples will buy the engagement and wedding rings together, whereas, at other times, the man surprises the woman by taking care of this,” shares blogger and influencer, Kenza Sadoun el Glaoui. “I am seeing more and more joint decisions but it usually remains a thoughtful journey where one person puts a lot of research into their partner’s tastes and buys alone for a surprise proposal," adds Sarr.

Furthermore, in some cases, proposals and marriage are of little interest to a couple at all, including Franny, who’s been with her partner for over 10 years. “I don't have an engagement ring or wedding ring because we don't want to get married, not now anyway,” she shares. “We talk about it sometimes but it passes us quite quickly because we don't need all of that to seal our love. Now if we decide to get engaged, I will opt for a sober ring, a solitaire in yellow gold and diamond. This ring would simply signify the path that we have lived together in recent years and that we will still live. Our commitment, fidelity, and — especially — love is, and will be, even stronger than ever.”