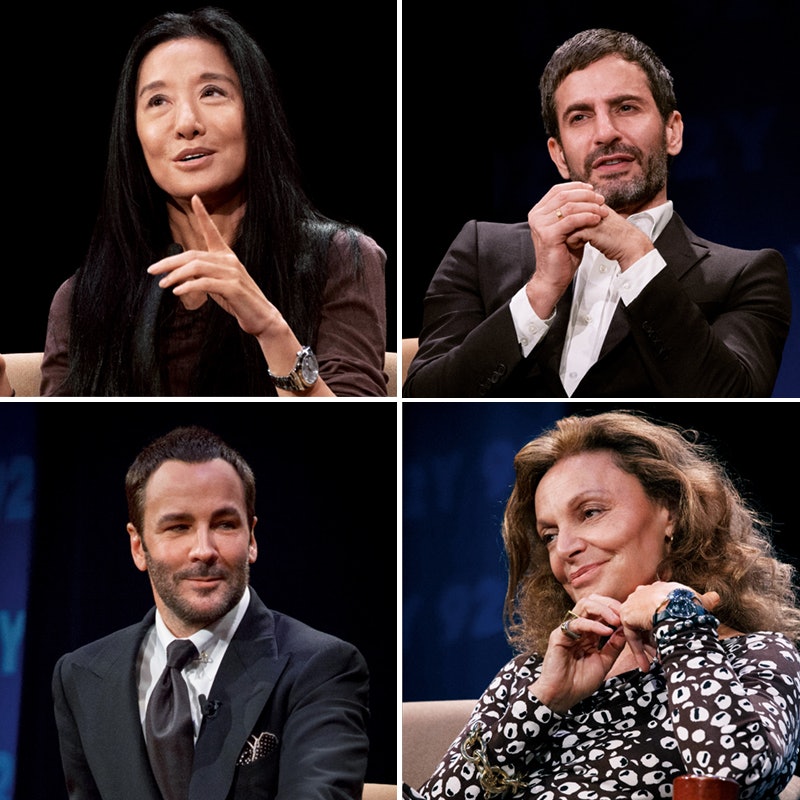 If you’re not familiar with fashion visionary Fern Mallis (she created New York Fashion Week) you’ll know the subjects she interviews: Tom Ford, Diane von Furstenberg, Marc Jacobs and Vera Wang are just a few of the icons included in her new book, Fashion Lives (out April 14th). The candid conversations recorded during the “Fashion Icons with Fern Mallis” series at New York’s prestigious 92nd Street Y helped shape this tome, which also includes personal photos even the Internet has yet to unearth. Here, a few answers to one of Fern’s common opening questions: “How did you get your start?”

Tom Ford on his first fashion job as an intern at Chloé in Paris:

"Oh God, I packed up shoes, I zipped things up, I sent them back to Vogue, I unpacked them, I organized the fashion closet—the Chloé sample closet. You know, the same things everyone does when they first start in fashion."

Diane von Furstenberg on her first fashion job in Paris as an assistant to a photography agent:

"Well, I mean, my job was to answer the phone, and usually to say that he wasn’t there. And it was either two girls whom he had slept with the night before or photographers whom he owed money to. He represented wonderful, very talented photographers like Bob Richardson and Harri Peccinotti, Art Kane, Jean Louis Schleff. I mean really, really good photographers. And it was indeed my first connection with the fashion world, the world of photographers. David Bailey—he represented him. And at the time David Bailey was married to Catherine Deneuve, so that was super glamorous. And then it was 1968."

Marc Jacobs on his first fashion job at Charivari in New York:

"[I was] folding shirts, bringing things up and down. Taking the clothes [once they had been pinned by the tailor] downstairs to have alterations done, filling out alterations tickets, putting tissue paper behind the register. I met Perry Ellis there."

Vera Wang on how she got one of her first jobs in New York City:

"When I was a salesgirl at Yves Saint Laurent, I was helping her [Frances Patiky Stein] buy clothing and she said, “You are really gifted—when you get out of college, call me and I’ll give you a job at Vogue.” I knew what Vogue was, but I didn’t understand what a fashion editor did. I think some people still don’t understand what they do. My mother said, “Don’t be ridiculous. She’s not going to give you a job at Vogue.” And I got out of college and I called her up. I said, “You may not remember me,” but she did, and I got the job. Isn’t that crazy?