The designer opens up. 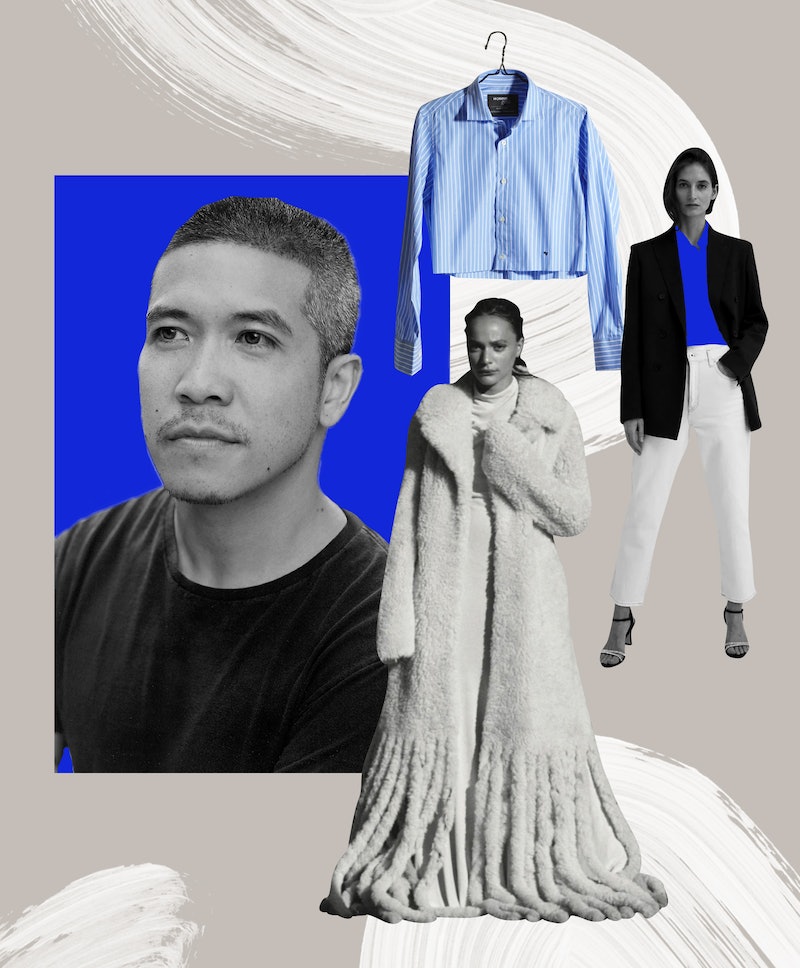 As far as fashion curveballs go, an entire year of living in sweats is one that no one could have predicted. And yet, five months before the pandemic threw us into a state of turmoil — a catalyst for a complete and total disruption to our sartorial status quo — Thakoon Panichgul quietly relaunched his namesake label from a luxury ready-to-wear collection to a direct-to-consumer model that was rooted in one brand-defining ethos: comfort clothing.

As far as predictions go in terms of how we would dress — and will likely continue to dress in some form or another — the 46-year-old Thai-American designer hit the proverbial nail on the head. The timing couldn’t have been better. While other luxury brands were forced to temporarily (some permanently) shutter their stores, struggled to ensure their staff was paid, and hosted archive sales to keep their business from going too far into the red, the shiny, new Thakoon prevailed.

“We’ve been very successful — especially during the pandemic,” says Panichgul as he knocks on wood (just in case), naming his hoodies and sweatpants as best-sellers. “We pivoted right before it happened, but I even said before the pandemic: I just want to make cool, comfortable clothes.”

You could argue that Panichgul has pivoted all his life, adapting, reinventing, and taking risks since he was a boy. Born in Nakhon Phanom, a town in the northeastern region of Thailand, and raised in Bangkok, he remembers a childhood of running around with his older brother in the country’s very busy, very congested capital and just having fun. It was here when clothing first piqued his interest: his grandmother taught him to sew and crochet, and he watched his cousin as she made clothes for her friends (and then clients) from magazine tear sheets.

But when he was 11, his mother remarried and they uprooted their lives, immigrating to the U.S. and settling in Bellevue, a little town outside of Omaha, Nebraska, that offered cornfields, cold weather, and little else. What Omaha did have: a newsstand at the mall that sold international editions of Vogue (British, Italian, French) and indie publications, like i-D, The Face, and Interview, which supplemented Panichgul’s burgeoning collection of magazines he subscribed to, including GQ (his first was the December 1988 issue featuring Tom Cruise and Dustin Hoffman), Vogue, and Elle. And he found artistic outlets to funnel his creative energy, such as drawing, sculpting, and photography. “I knew one day, when I grew up, I wanted to be in fashion, and the only place to be was New York,” he says, which was why he looked to the Northeast for college, landing on Boston University and then interning whenever he could in New York City.

So it was quite fortuitous, then, that in 2000, Panichgul’s first big, post-grad, career-launching job in New York was at Harper’s Bazaar — though he humbly describes it more like a fluke than kismet. There was a writing assistant position open in the fashion features department under the newly minted editor-in-chief Kate Betts, and while he loved magazines, he never intended to write for one. He applied anyway, at the insistence of a friend, submitted edit tests, and got the job, and “it was like, ‘Cool, I guess I’m writing now,” he laughs. “I could write, but when English is your second language — now, it’s my first and I speak it better than Thai — there’s always this doubt, this discomfort there.”

As a liaison between fashion and features, Panichgul called in products for photoshoots, wrote copy, and assisted stylists on set, which led to writing features on designers. But his absolute favorite part? Spending time with designers and visiting them at their studios. As someone who grew up working with his hands, who found creative fulfillment in art, it got him thinking about pivoting to design.

On top of his full-time job at Bazaar, he enrolled in night and weekend classes at Parsons (a five-hour class on apparel construction on Saturdays; sketching and draping classes on weeknights). After a year and a half, he cobbled together his first set of samples: a lace hoodie that married a fanciful fabric like black lace with a sporty silhouette; a salt-and-pepper tweed coat that he fashioned into a blazer, bluntly cropping it in half with the lace lining spilling out; and anorak jackets made from candy-colored taffeta. He showed them to Sally Singer, the then-fashion features director at Vogue, and Julie Gilhart, the then-fashion director at Barneys New York, and with the encouragement from both, he quit his job in April 2004, spent the summer to focus on building his collection, then showed in September at New York Fashion Week to rave reviews. Thakoon, the label, was born.

“I just went on intuition. I was young enough to take that risk,” Panichgul says. “At the time, I felt like I had something to say that was different from other New York designers. New York was — and still is — a commercial city in fashion, but for me, I saw this energy bubbling up downtown that was more experimental and deconstructed, and that’s what I was into: taking couture fabrics like lace, jacquards, and brocades, deconstructing them and putting them in silhouettes that were quite American. And people were excited about it.”

By people, he means an adoring fan base that includes powerful editrixes like Anna Wintour, celebrities, and political figures — namely, one Michelle Obama. He rattles off major milestones, which include his first editorial feature in Vogue that was shot by Steven Meisel and styled by Grace Coddington, a starring role in The September Issue, and his first celebrity fan (Demi Moore).

After years of immense growth and success came Panichgul’s next pivot. It was the year 2016, and change had been brewing, driven by the rise of influencer culture; the popularity of e-commerce, threatening the existence of retail behemoths; and the pervasiveness of social media that not only democratized fashion, but accelerated the rate at which consumers made purchases. The industry’s answer to it was the “see-now, buy-now” model, a buzzy trend that eschewed a traditional buying schedule (designers show one season, garments are then made available the next) in favor of one in which viewers are able to snap up pieces immediately right after they’re shown on the runway to satiate consumer appetite and hopefully, drum up sales. For Thakoon, it didn’t work.

“I had been thinking a year or two before [the switch], that unless we did something we were going to be left behind because competition was fierce and the demands from consumers and retailers were too much,” recalls Panichgul, who found an investor in Hong Kong billionaire Silas Chou to overhaul his business model. “The see-now, buy-now idea sounded exciting, but in luxury fashion, customers don’t behave that way — not very many people can see a $2,000 coat and buy it like that. You can heart something on social media, but it doesn’t mean you’re going to buy it, and that’s why I decided it was best we took a hiatus and rethink what we wanted to do.”

In 2017, Panichgul took a step back, temporarily shuttering his label. Yes, he was heartbroken. Yes, it was scary. “In fashion, you’re taught you’re as good as your last collection, so if you’re gone even for just a year, you’re forgotten — all of a sudden, I’m watching from afar,” he remembers. “But I knew I had more to do, I knew I wasn’t done.”

Time spent outside the fashion bubble allowed him to understand — and with startling clarity — consumer behavior (women are no longer shelling thousands of dollars to buy a dress they’d only wear once), what runway fashion has become (a source of entertainment versus something to purchase), and how he personally approaches his own wardrobe (a casual-skewing closet that holds core essentials). And so, he pivoted once more, making over Thakoon into an accessible, more affordable, digitally native, direct-to-consumer brand, with Matt Scanlan, a DTC savant who founded Nadaam Inc and co-founded cashmere brand Nadaam, as its CEO.

“Runway is the pinnacle of creativity, but people are only buying from Zara, Uniqlo, Everlane, so we’re outputting creative but not actually dressing people? I wanted to dress people with versatile capsule pieces that can be worn over and over again — that’s the idea behind Thakoon,” says Panichgul, who has found the DTC model to be liberating because he no longer has to answer to retailers. “And in this day and age, you can’t expect people to wear something if they’re not comfortable. Once you’ve introduced sneakers, stretch, and sweatshirts, you can’t take it back. And they’re not going to give it back.”

He took fundamentals (button-downs, tees, denim) and injected comfort (super-soft fabrics and stretch) and incorporated signature Thakoon details, like remixing a sweatshirt with men’s shirting for an elevated take, adding a tie-neck bow to a polka-dot button-down, or being considerate with the fabrications and colorways. “It’s a quieter way to design,” Panichgul says, “but it’s still a discipline that’s integral to being a good designer.”

Another project he dreamed up during his hiatus (over martinis with a friend in TriBeCa): HommeGirls, a creative platform — part zine, part merch line — that celebrates the borrow-from-the-boys spirit in women. And after nearly two years, it has amassed almost a cult-like following among industry insiders and celebrities alike. But not very many people are aware that Panichgul is the mastermind behind HommeGirls — and he likes it that way.

“I’ve always loved tomboys, girls with this ballsy, cheeky spirit, but it hasn’t been presented as a platform,” he explains. “I wanted to create a collective for women, but I’m not here to dictate. I prefer to be more behind the scenes because you don’t need an old Asian man telling you what to do.”

If there’s one thing Panichgul could point to as key to his success, it’s awareness. He knew when to change career paths. He knew when his business was no longer working. And he’s very much aware of his role as an influential Asian American figure, especially in today’s climate and amid the surge of anti-Asian hate crimes across the country. What he doesn’t find productive: needlessly yelling about it on social media. Like most Asian Americans, he was taught to keep his head down, to let insults and microaggressions roll off his back, and to work hard, but he also recognizes that being Asian never barred him from the opportunities, successes, and fortune that he has found in his professional career.

“I can’t help but think that there will always be conflict, but we need to cut through the noise and embrace activism that’s productive,” he says. “What is productive: treating people of different cultures with respect and sharing stories that highlight the positive impact of Asian Americans. So, this is my chance to say: I’m an Asian immigrant who achieved the American Dream, paving the way for others of different cultural backgrounds to do the same. And that’s why you need to pay attention.”