A look behind Paris’ buzziest brand. 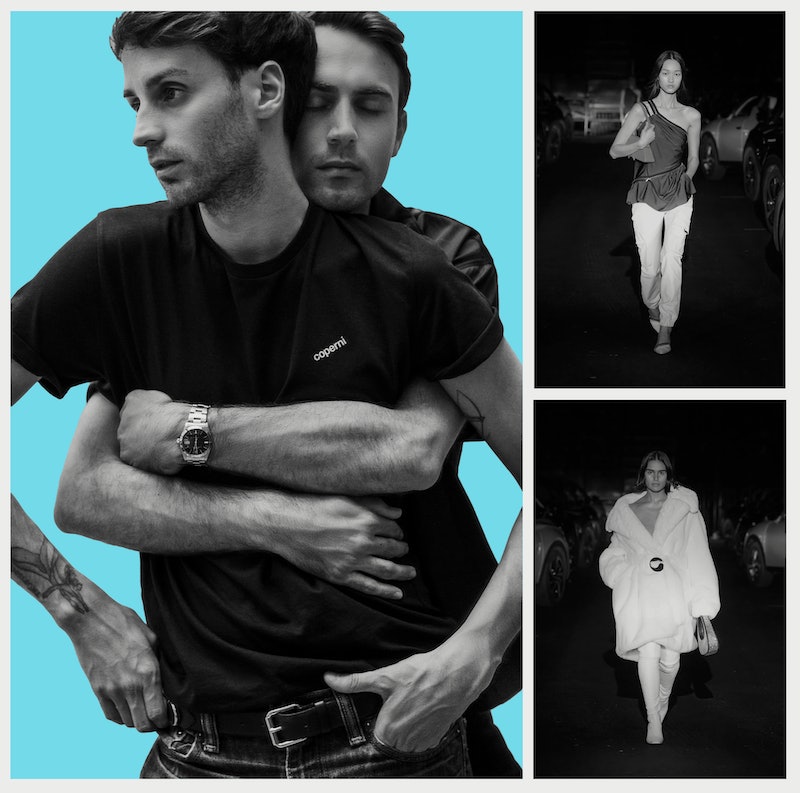 Arnaud Vaillant is taking me on a Zoom tour of Coperni’s offices, located in the center of Paris. “We do everything here, we prepare all the shows, all the collections,” he explains as he wizzes the camera past racks of clothing top-lit by a glass-paned rooftop. He points to a staircase that leads to the atelier, and sits down, his slime green shirt the sole pop of color against the white walls behind him. Vaillant — who is CEO and co-founder of the Parisian label alongside his partner and creative director Sébastien Meyer — has spent the last year holed up in the place most others long abandoned: the office.

“We stopped a year ago at the beginning of Covid, but then during the second and third containments we went to work because it's impossible you know ... you have to touch the fabrics, you have to do the fittings.” Through the last year, Vaillant and Meyer have turned to the office as their own form of escape. While usually, it’s a far-flung trip, perfect meal, or some other novelty that inspires creative minds to make something new, instead, driving ambition and the thought of new collections became a way to find peace amidst a disrupted reality.

Fascinated by the way technology and fashion intersect, the duo have explored new frontiers over the last year — using an antibacterial fabric in their Spring/Summer 2021 collection, working with apple leather, and using QR codes to give a behind the scenes look at how an item was made in the collection. “We always try to find innovation, in a humble way of course,” he explains. “We’re not at Nike, we don’t have a huge budget for development.”

They’ve also been forced to think outside of the box in how they present their collections. “During the first confinement [in September] we did the highest [elevation] show ever in Paris on the rooftop of Montparnasse. We had only 100 people invited.” In March, when crowds weren’t allowed in shows, they hosted a drive-in event instead, with models weaving their way between parked cars.

But, while the last year may have challenged the founders, they have remained true to their self-described “techno-chic” aesthetic. First launched in 2013, Coperni is one of a handful of Parisian brands re-defining the concept of French style through a modern lens. Though the label was retired for a short period when Vaillant and Meyer took the helm at iconic French fashion house Courrèges from 2015-2017, it was reinstated in 2019. Since then, Coperni has set itself apart from the French-girl trope, offering clothes (and accessories) that are minimal yet edgy — a work-to-club-to-work uniform for a modern city woman.

Valliant explains that the popular Parisian aesthetic isn’t as effortless as it’s always made out to be. “We have the very official Parisian woman, Ines De La Fressange, the new Jane Birkin girls including Jeanne Damas ... the stereotype of the dark jeans and the baskets, which I like, it’s kind of fun. But at the same time, we have a more futuristic sexy Parisian woman.” This is the Coperni woman. “I always think about Helena Tejedor, she's our stylist in Paris. I adore her so much because she dresses in a sexy confident way.”

Despite the inability to shop in person or attend fashion shows, Vaillant says that time for curiosity drove an entirely new group of customers to discover the brand during Covid. “Our website was insane, it was a strong time for visiting and discovering.” Adding that while at first during the pandemic, he saw an interest in shopping for comfort, now it’s about sexy dressing. “[Our fall collection] was an homage to the nightlife, as the collection will be delivered in September. Hopefully [by then] we will have the nightlife back. We wanted the girl to feel hot and cool and fun. That's what we want right now.” Adds Tejedor, “the woman I envision for Coperni is a woman that is more than anything curious and on top of all the most recent advances whether it's in technology, music, or art, a tomboy at heart but always sexy. And by sexy I mean she embraces her femininity and sexuality... Unapologetic is not a word taken lightly at Coperni.”

And while “sexy” is a term often used to describe a short hemline, sheer top, or plunging neckline (all elements found within Coperni’s collections), the brand translates the concept in a less literal way as well. The brand’s round, structured Swipe bag — perhaps its singular best-known item — is the type of piece that while conceptually simple, has an It factor that has drawn influencers to it. “We are passionate about minimal organic shapes, and also [inspired] by technology,” he explains. Adding, “all of our bags are all inspired by tech symbols.”

Now that restrictions are lifting and life is beginning to resemble something similar to pre-pandemic, Vaillant and Meyer are finally reemerging from the protection of their cozy workspace. In fact, the two are traveling to Greece to get married. And once they return: “We always love to visit museums and to get more inspiration from art by architecture. And then we party a lot, so we do enjoy hanging out with friends. We’re pretty normal people actually.” The last year has challenged what “normal” means anymore, but for Coperni, the clothes speak for themselves.