Industry insiders reflect on the promises made after #BlackoutTuesday. 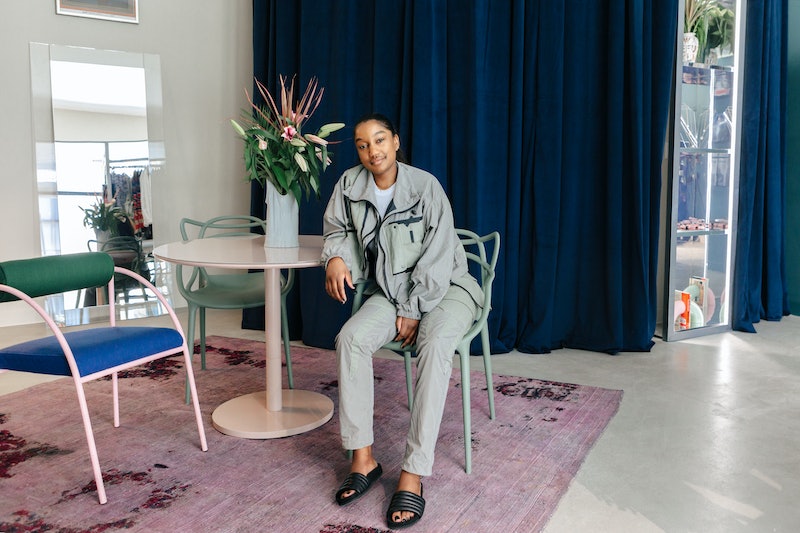 In the midst of uprisings last summer — which drew thousands of people to the streets in droves across North America protesting the murder of George Floyd, a 46-year-old Black man, who had been killed by Minneapolis police just a week earlier — came declarations and support in the form of black squares on Instagram, titled “Blackout Tuesday,” last June. Originally started under the hashtag #TheShowMustBePaused, the movement was created by two Black women in the music industry, Jamila Thomas and Brianna Agyemang. With its rise came an outpouring of support for Black fashion businesses, with a sudden rush of attention being brought to hundreds of Black stores and designers. But, interest does not guarantee long-term support.

"It is a day to take a beat for an honest, reflective, and productive conversation about what actions we need to collectively take to support the Black community," Thomas and Agyemang, wrote online of their intentions. The black tiles were an effort to display a sign of solidarity, a call to end systemic racism, and represent allyship with those grieving and fighting for injustice at the hands of the militarized police force. With the squares, came declarations from public figures, and fashion brands alike who publicly posted their thoughts and contributions.

In the days, weeks and months following the viral hashtag, Black designers were profiled and featured on lists by way of glossy publications and social media. It was an untraditional sight to bear witness to, as those who are routinely left out of major fashion conversations were now being spotlighted and championed. But as the anniversary of the initiative approaches, Black-owned businesses have experienced a range of both challenges and successes since Blackout Tuesday.

Within days of the initiative's launch, brands and publications quickly shared support. Gucci, who had been under fire in 2019 due to a sweatshirt having a striking resemblance to Black face, posted text on its Instagram, which read, “How do we speak to bias and bigotry? Start by having the first conversation at your own kitchen table,” quoting author and activist Cleo Wade, also announcing that the brand will make donations to the NAACP, Know Your Rights Camp and Campaign Zero. Beauty brand Glossier said it would be donating $1M to initiatives fighting for the cause and Black-owned beauty brands, with other luxury brands stepping up to fund organizations fighting injustices.

With hundreds, if not thousands of declarations made, many users on social media debated if the messages were performative — without a lasting effect. “When I would scroll from three months ago, most of these brands weren’t posting anything for Black people,” Brandon Blackwood, a Chinese-Jamaican designer, says of the profiles he saw sharing support. “A lot of brands had to look at themselves and their offices and be honest with themselves. There was a sudden rush to highlight Black influencers, Black designers, just Black anything but they wouldn’t post a photo of Breonna Taylor or George Floyd, but a black square could fit in anyone’s Instagram aesthetic with the caption ‘hashtag BLM.'”

Brooklyn-based Blackwood, has captivated the hearts of fashion enthusiasts everywhere with his luxury accessories and goods label of the same name with a focus on making it accessible to the majority. Making waves with his “End Systemic Racism” Tote last July, in response to the protests calling for an end to racism and inequality, the designer felt compelled to respond through creativity.

“I felt as a designer, especially as a Black creative during the height of Black Lives Matter protests to do something. We were all out on the streets doing our part, it felt weird selling pretty things while the world was crumbling in front of us, that’s where the End Systemic Racism totes came from.” Blackwood continued to participate in the discourse by donating a portion of the proceeds to the Lawyers Committee for Civil Rights, a pro bono legal assistance program. Amidst his own work, Blackwood also saw a major increase in awareness last summer with sales tripling.

Like Blackwood, Sydney Ziems, founder of Serendipitous Project, experienced a massive "pop" as she calls it during the height of the protests last summer. Ziems has created a unique space on Instagram for fans to order one-of-a-kind pieces, made by hand with no reliance on factories. Ziems aspires to let individuality and natural materials shine, where consumers can receive statement jewelry whilst receiving background on each piece. “I got so much attention during the Black Lives Matter movement and it was a lot to deal with. As I am a one-woman show, I had to scale for all of the eyes that were on me all of a sudden,” she continues, “It felt a little overwhelming.”

Ziems also explains that while well-intentioned, the initial attention posed a challenge for scaling her business. “I think a lot of people didn’t realize that it was a small business. I felt like the expectation was a little much for the infrastructure I had.” Despite the sudden growth in awareness and popularity, Ziems was mindful of the amount of attention that was coming to her and worried that it may fade. “At one moment, I was like, ‘should I hire somebody?’ but then what if the attention wasn’t there in the next few months?”

For Telsha Anderson, the 27-year-old visionary behind NYC boutique T.A, who has been lauded for featuring innovative designers with pieces sourced from Milan, South Korea, and Peru, launching her business in early 2020 was a venture full of twists and turns. “Thankfully due to the massive sharing online, support came from people who posted those black squares and it’s been constant in all angles within the industry," she explains of the response since first opening. "I look forward to that growth, and I’m happy people are still interested and developing stories around our achievements, not just interested in supporting me as a Black business, but also other Black businesses.”

Brittany Kozerski, the founder of Jade Swim, explains that, as a fashion designer, the act of designing only accounts for 10% of her time while managing the business side is the other 90%. The former fashion editor saw a huge increase in sales after being tagged in Instagram posts and editorial roundups, boosting her business' e-commerce site. On top of that, “we saw an increase in buys from retailers who hold our products in-store, with a 50% increase from last year,” she says.

According to data published by AIGA Design Census, less than 5% of designers self-identify as Black, which represents a huge disparity within the fashion industry. Initiatives to change that have arisen including Where Are All The Black Designers, a platform for Black designers headed by Mitzi Okou, which aims to “connect designers, educators, and creative leaders to host a dialogue about change, both in and out of the design industry” and the Fifteen Percent Pledge headed by Aurora James, which calls on major retailers to “commit a minimum of 15% of their shelf to Black-owned businesses.”

For Sydney Ziems, the initial swell of attention she saw over the summer hasn't outwardly held up as she expected. “There was a sudden rush in the publishing world to include Black businesses and Black designers with write-ups, but I definitely see a difference, this year for Black History Month especially," she explains. "I expected to see more initiatives and write-ups, and highlighting like they did in June of last year, but I haven’t seen that at all.”

A majority of Black designers have experienced many wins over the last few months but, despite attention, were met with different outcomes in regards to grants and funding. Applying for the Paycheck Protection Program (PPP) twice, Anderson didn’t receive any assistance. Kozerski didn’t apply for any funding or grants as she wanted to allow those resources and opportunities to go to other Black businesses who needed it more. But, Black businesses have been granted less assistance according to a study by the Nation Community Reinvestment Coalition.

Instead, these small businesses have looked to other opportunities. Anderson hopes that people who developed an interest in the brand would direct funding and grants her way to help sustain her business, but has not yet received assistance. Brandon Blackwood was offered collaborative opportunities and free ad space instead of grants or funding. Ziems echoes the lack of intention behind the support she experienced, “I wish there were more foundations to help, I personally feel like I didn’t have access to learn about scaling my business. I wish there were more mentorships for small Black businesses to help us grow in the long-term, instead of helping me pop for the moment.”

As the anniversary of Blackout Tuesday approaches, the general consensus is that Black designers need to be amplified throughout the course of the year and not when it’s convenient. In order for continued success, longstanding funding and mentorship is needed to properly assist Black designers to develop into robust, legacy brands. Support shouldn’t only be directed during times of loss, plight, and trauma within the Black community to bring attention to talented individuals who are often overlooked, if you want to evoke real change, Black designers need continued support every day, year round.