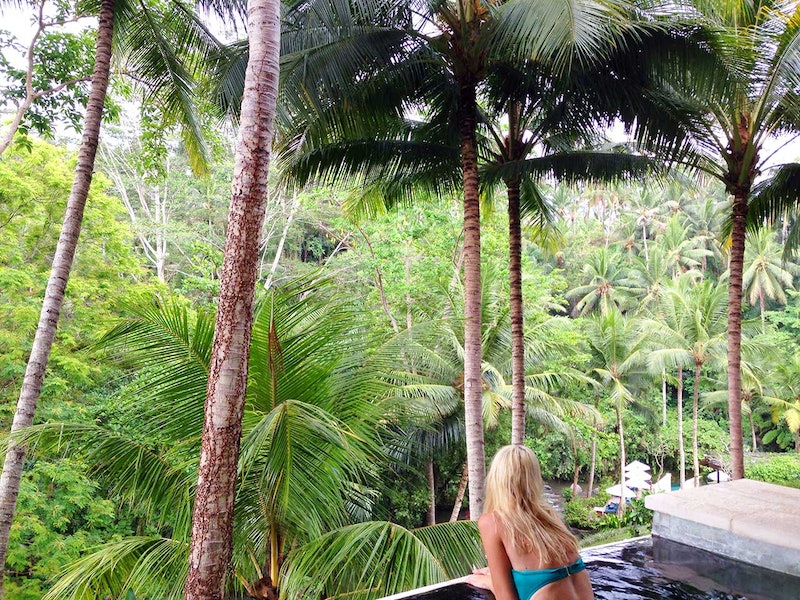 A couple of years ago, I quit my job and moved to Bali, much like the writer of Eat Pray Love had done before me. Here’s how I did it (and how you can, too).

Why I Wanted To Go

Before I made the decision to move, I was in a place in life which I feel is pretty common—I was working insane hours at a job I didn’t love that somehow still just barely afforded me my far-from-extravagant lifestyle.

Some years earlier, I had started and sold a company which, while it sounds great on paper, meant that I had worked for free for several years prior to the sale, incurring debt. In what was a majorly bummer-inducing turn of events (and is a very long story), I also didn’t make a dime when the company sold. The financial sacrifices I had made, and the subsequent lack of personal financial gain, meant that I would be living paycheck to paycheck for some time into the future. I felt trapped.

Slowly, I began to unravel. An unhealthy work environment, continued financial concerns, a bad breakup, and a host of other normal but stressful life events caused me to wonder “is this all there is?” I was also just beyond burnt out—starting your own company is no joke, and I had run myself into the ground. My mom begged me to consider other options in terms of what I was doing with my life and, at my breaking point, I finally heeded her advice.

My transition to Bali life happened in steps. First—in what was considered to be an insane move—I put all of my stuff in storage, gave up my apartment, and became Kato Kaelin, by which I mean I began living with friends (and one very nice ex-boyfriend) for free.

The next thing I did to prepare was even crazier than the first. I took on a second job as a consultant on top of my 12+ hour/day job, and it was absolutely miserable. I told myself it was temporary, however, and banking a ton of cash for the first time in a long time felt great.

The third thing I did, several months later, was the most difficult: I quit both jobs. This sounds far more fun than it actually was, because (as you know if you’ve been supporting yourself since you were 18) the idea of not having a job is absolutely terrifying. In fact, this period in my life was the first in which I ever experienced a panic attack.

Then, I moved back in with my parents, which probably seems horrible but was actually pretty amazing. I had never really known my parents as an adult, and living with them so many years after I left home allowed me to see them in a new light (read: as humans). It also gave us quality time for which I know I will be forever grateful, even if it did involve so many episodes of Dancing with the Stars. Finally, after you’ve been taking care of yourself for so long, the most luxurious thing in the world is to suddenly have someone else doing it for you.

My mom was in heaven, as she thought that this move meant that I had finally decided to come home and give her grandchildren. Behind the closed bedroom door of the room where I had secretly plotted my escape as a teenager, however, I was plotting yet again. This time, I was researching all the places I could potentially live, trying to find the one that would provide the best quality of life at the smallest expense. Finally, I settled on Bali.

Read More: These Cities Will Pay You To Live In Them

About a zillion people called me crazy and irresponsible for moving to Bali, which I understand. The word “Bali” evokes ideals of an extravagant vacation; however, my life in Bali was less than one-third the cost of my life in Los Angeles, even if you factored in my $1200 roundtrip plane ticket. My rent went from $2k per month to $850; the prior was for a crappy one-bedroom apartment in which someone had definitely been stabbed at some point, and the latter was for a 2-story bungalow with its own pool (from Airbnb, too, which is definitely not the cheapest option available). Meals in Ubud, where I lived, were both incredible and incredibly cheap—you could have dinner with dessert and a beer for something like $7. I didn’t have a car and I didn’t need one, as I walked everywhere or, if needed, hired one of the ten zillion taxi drivers the town boasts at all times (or hopped on back of a stranger’s scooter, which sound dangerous and probably is, but was amazing nonetheless).

My days were mostly slow, but they flew by fast. I’d write all morning and then, around lunchtime, I’d walk into town for a meal (I loved Melting Wok and Clear Cafe). After a leisurely lunch, I’d take an equally leisurely stroll around town, stopping to shop, see sights, do yoga, get a crazy-cheap beauty or spa treatment, or visit the monkeys in The Monkey Forest. Then, I’d post up with some wine—because I could—for the city’s afternoon rain showers. At this point, I’d often end up meeting someone new—usually another expat or traveler. After, I’d either stick around town for dinner or I’d walk back to the street on which I lived for dinner with my Balinese friends.

On that note, what I eventually learned is that Bali is an incredibly safe place to travel as a woman, alone… at least from my experience. The culture doesn’t really involve the kind of catcalling you might expect in some European or South American countries (or, New York); it’s a place blissfully free of lecherous men. The people were, in fact, some of the nicest, most helpful, and least threatening people I’ve met in all of my travels. As in any place where there are huge income disparities evident, however, it’s probably not appropriate to wear your brightest bling or whatnot and, as always, you should be smart and aware of your surroundings at all times.

Read More: I Got My Eyebrows Tattooed And This Is What Happened

Why I Came Back

When I was 22, I moved to New York on a whim one weekend with $300 in my bank account, and it was the best decision I had ever made. I similarly went to Bali without a plan, figuring that, like my New York experience, I’d just check it out and stay as long as I liked. The difference this time around was that while in New York I had managed to luck into an incredibly high-paying gig, my cash flow, or lack thereof, became worrisome while I was in Bali.

For starters, if you are single and childless, you can absolutely do this if you want to. I never thought it would be possible to move to a foreign country. Now, I know there are no excuses; if I want to do it, I can. (As an aside, there are actually are a lot of expat single moms in Bali. My theory is that it’s because Ubud is cheap and safe.)

Secondly, the old saying “wherever you go, there you are” wasn’t actually true in this case. In Bali, I suffered from none of the anxiety or depression that plagued me in Los Angeles. I realized as a result that there were specific things in my LA life that weren’t serving me, and I have worked very hard since my return—with various levels of success—to keep them out of my life. My time in Bali was like a life detox; I rid myself of everything, and in doing so realized which parts of my life were actually making me happy and which absolutely were not.

Finally, I think we could all learn a lesson from Balinese culture. In America, we have an "every man for himself" kind of mentality when it comes to our resources. In Bali, on the other hand, communities care for one another. If you’re out of work for a week, your neighbors float you, knowing that you’ll pull your weight at another time. I met a woman whose husband had recently died in a motorcycle accident, and she had three small children. Rather than end up begging on the street, her expenses were simply absorbed by the community. Not to be overly sentimental, but I found this way of life to be beautiful.

Should You Do It?

More About Bali Specifically Ubud is not for everyone, as it’s not the tropical paradise you might imagine--it can be loud and congested, it’s not on a beach, and there’s very little nightlife of which to speak. I had a couple of friends visit and, for the most part, they were not really fans. (Though they thoroughly enjoyed nearby Seminyak, a tourist-y party beach.) I, on the other hand, loved it, as I found Ubud to be the perfect combination of exotic and familiar, tropical and urban, debaucherous and health-centric. The only thing that I did not find ideal about Ubud was that the wine is actually pretty pricey, which makes day drinking because you can a potentially costly pastime.

Moving Abroad Generally: Some Things To Consider In the interest of full disclosure, I did work some freelance while I was in Bali, but very sparsely—just enough so that I didn’t wake up at night in cold sweats having not seen a deposit to my account post in months. (As a point of reference, freelance writing pays about $1 a day, so it was a nominal but comforting income.) If you want to move abroad, I would consider trying to set yourself up financially in advance, and not in the binge-working way that I did. For the sake of your sanity, it’s probably advisable to squirrel away income or earn additional income gradually and, if possible, set up remote consulting work before you go. If I had wanted to stay in Bali forever, I would’ve been pretty bummed about coming back. In fact, I was pretty bummed about having to come back, and I am not sure what I would have chosen to do had I had a choice (financially).

I don’t get lonely very easily as an introvert; I like alone time, and after years of an insanely-packed social calendar, I relished the solitude. I also made a lot of friends in Ubud and had an almost annoyingly consistent stream of visitors from the states. For those who aren’t so comfortable with being alone, however, the situation might have been unbearable, especially at first.

If you are risk averse, I wouldn’t recommend trying this type of maneuver, as quitting your job, especially in this economy, can have long-lasting repercussions. If you dream of doing something like this on a regular basis, however, my advice would be to go for it. I regret staying in a job I disliked for as long as I did. I do not regret moving to New York on a whim when I was 22 or moving to Indonesia after ever-so-slightly more thought some years later. Those two experiences stand out in my mind as being some of the best of my life. One night, while I was living in Ubud, a Balinese friend said to me, "There are so many women who come here from the United States." "It's because of the book Eat Pray Love," I responded. "No," he said. "It's because they're sad. Here, they get happy."

Read More: 6 Destinations to Add To Your Bucket List ASAP