The transformation is amazing. 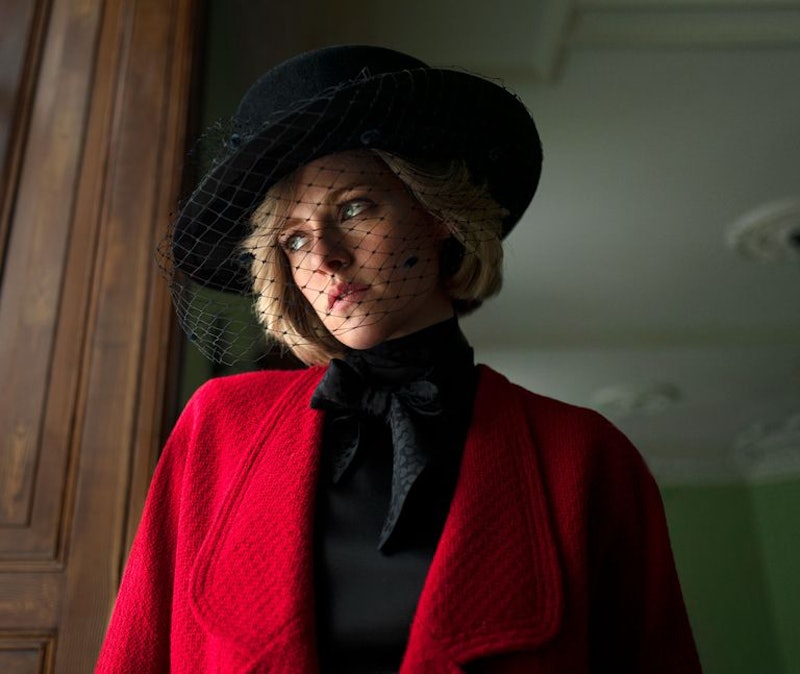 Royal enthusiasts everywhere, rejoice. On Thursday, production company Neon shared a stunning new portrait of Kristen Stewart in the upcoming film Spencer. The 30-year-old actress will play the legendary Princess Diana in the highly anticipated movie, which takes its title from Princess Di’s maiden name. In the photo, Stewart has Diana's signature blonde hair and wears a tartan blazer, a printed blouse, and pearl earrings. Of course, no replica look of Diana is complete without her iconic sapphire and diamond engagement ring, which takes center stage in the picture. (The famous sparkler now belongs to The Duchess of Cambridge Kate Middleton.) According to Entertainment Tonight, it appears Stewart, in this photo, is recreating a look that Diana wore to a 1989 visit to Portsmouth, England.

The buzzy new movie from Chilean-born filmmaker Pablo Larraín has been on everyone's radar since Deadline announced Stewart was to play Princess Diana last June. Larraín has done biopic's on legendary women before. One of his best-known works was Jackie, a 2016 Oscar-nominated biopic about Jacqueline Kennedy Onassis, starring Natalie Portman as Jackie. Currently Spencer is still in production, but its stars and director have revealed some details. Ahead, everything you should know about one of the year's most anticipated movies.

Set in the early '90s, Spencer takes place over the course of three days during one of Princess Diana’s final Christmas holidays spent at the House of Windsor at the royal Sandringham estate in Norfolk, England. The film will focus on how and why Princess Diana officially decided to divorce Prince Charles, whom she married in 1981 and would later separate from in 1996. Stewart told Jimmy Kimmel, "[Spencer] takes place over three days, and it's this really poetic, internal imagining of what that might have felt like, rather than giving new information."

British screenwriter Steven Knight wrote the movie's script. Knight is best known as the creator of the television show, Peaky Blinders. He's also written multiple other film screenplays for movies such as The Hundred-Foot Journey and Seventh Son. "We decided to get into a story about identity, and around how a woman decides somehow, not to be the queen," Larraín said to Deadline. “She's a woman who, in the journey of the movie, decides and realizes that she wants to be the woman she was before she met Charles."

As you already know, Stewart is to play Princess Diana. When the casting was announced, it came with mixed reviews, but director Larraín squashed any doubts about the Twilight star's ability to perform. "To do this well, you need something very important in film, which is mystery," Larraín told Deadline. "Kristen can be many things, and she can be very mysterious and very fragile and ultimately very strong as well, which is what we need."

In a conversation with InStyle in November, the actress revealed one of the hardest parts about the role was getting Princess Diana's accent just right. “The accent is intimidating as all hell because people know that voice, and it's so, so distinct and particular," she said. "I'm working on it now and already have my dialect coach."

Besides portraying Princess Diana’s memorable accent and hairstyle, the film will also capture her style. Below, Stewart posed for a photo channeling all the essence of ‘90s Diana while wearing a red jacket, a black pussy-bow blouse, and a veiled boater hat — the differences between that photo released in January and the actual one of Princess Diana taken in December 1993 are hard to spot. Harper’s Baazar revealed the coat in the photo is actually vintage Chanel. The outerwear piece is from the fashion house's Fall/Winter 1988/1989 collection, so keep your eyes on some nostalgic fashion pieces in Spencer.

As for who will play Prince Charles, that will be none other than Poldark star Jack Farthing. Additionally, he's starred in Blandings and the Netflix movie Love, Wedding, Repeat. Other cast members joining the ensemble include Timothy Spall (Mr. Turner), Academy Award nominee Sally Hawkins (The Shape of Water), and Sean Harris (Mission: Impossible – Fallout), but their roles in the film have yet to be announced.

It’s going to be a while before fans can witness Stewart in all her royal glory. According to the actor, the film started production in mid-January in Germany, but it has since moved to the U.K. to continue filming. The movie doesn't have a set release date yet, but is slated to come out sometime this fall.