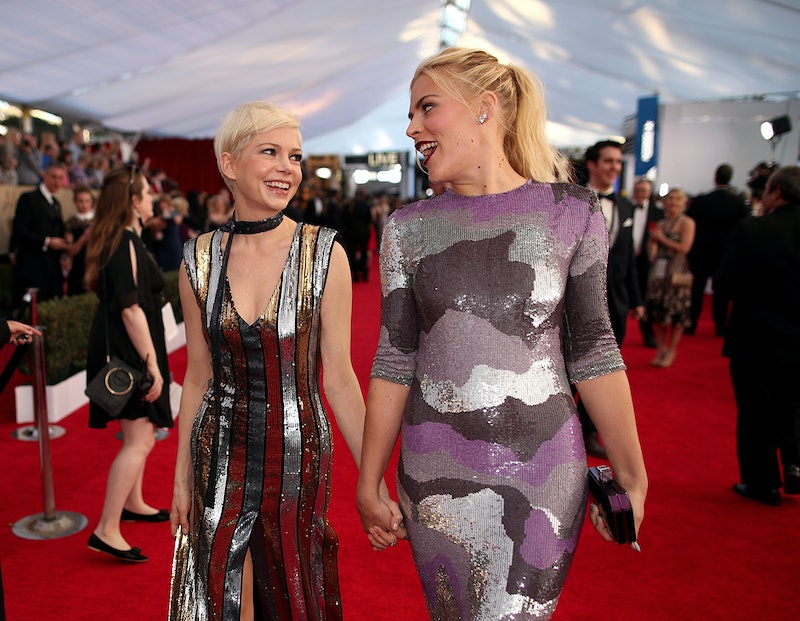 Lately we’ve been loving following the well-dressed duos working the award shows’ red carpets: Chrissy Teigen and John Legend, Emily Blunt and John Krasinski, and Nicole Kidman and Keith Urban among some of our faves. But one of our top twosomes to fawn over isn’t a romantic couple—it’s a female friendship that’s been going strong for over 15 years (which is way longer than most Hollywood marriages, by the way). Michelle Williams and Busy Phillips met on the set of Dawson’s Creek and have been close ever since (Busy is even the godmother of Michelle’s daughter, Matilda). When award season gets into full swing, these two continue to be each other’s “plus one” for all the glitzy affairs and we can’t get enough of seeing these gals get glammed up and make a lady date out of it. While we patiently await their fashion selections for upcoming Oscar night, here are a few of our favorite red carpet appearances by the one of the chicest friendships in the business.

At this year's Golden Globes, Michelle chose a lace Louis Vuitton and Busy went with an embroidered Stella McCartney creation.

Wearing another LV gown, the Manchester By the Sea star posed side by side with Phillips, whose red lace dress was designed by Martha Medeiros.

They were all smiles walking the carpet at the 2016 Tony Awards.

At the 2012 Academy Awards, the besties both picked strapless, corseted gowns.

It seriously doesn't get sweeter than this moment where proud pal Busy snapped a pic of Michelle, who just grabbed the 2012 Golden Globe for her work in My Week With Marilyn.