"I just didn't see a solution." 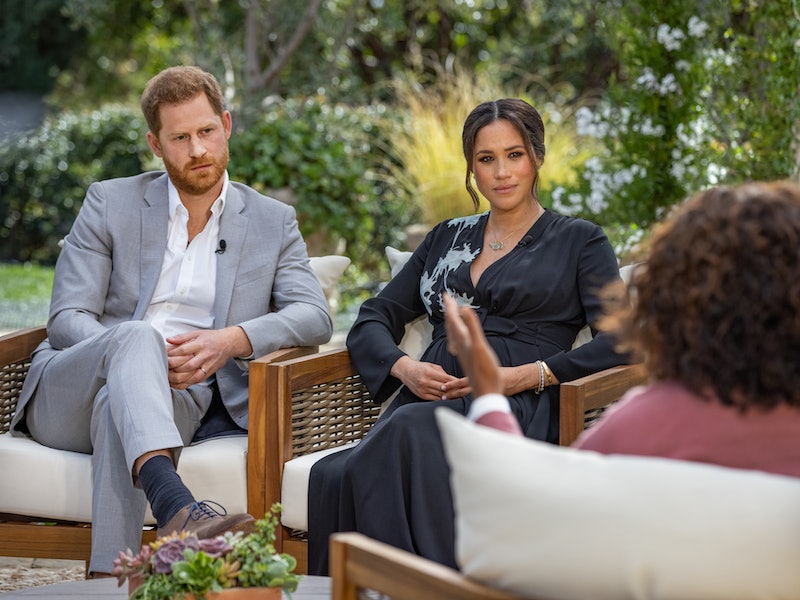 In an emotional sit-down with Oprah Winfrey on March 7, Meghan Markle revealed her struggles with mental health due to the onslaught of tabloid attacks against her. In the two-hour interview on CBS with her husband Prince Harry, she discussed the lack of support she received from the institution of the royal family and revealed heartbreaking details of how it has affected her and her family.

"I just didn't see a solution," she told Winfrey of her treatment by both the media and the royal family. "I would sit up at night, and I was just like, 'I don't understand how all of this is being churned out.' And again, I wasn't seeing it, but it's almost worse when you feel it through the expression of my mom or my friends, or them calling me crying just like, 'Meg, they're not protecting you.' And I realized that it was all happening just because I was breathing."

Markle went on to discuss her suicidal thoughts and the feelings of shame she felt in telling others — particularly her husband — what she was going through.

"Look, I was really ashamed to say it at the time, and ashamed to have to admit it, to Harry especially, because I know how much loss he's suffered. But I knew that if I didn't say it, that I would do it, and I just didn't want to be alive anymore. And that was a very clear, and real, and a frightening constant thought."

Markle also described how her request for help from the institution was met with refusal and inaction. Along with it, she shared an important message for others who are struggling. "I went to one of the most senior people to get help. And I share this because, there are so many people who are afraid to voice that they need help, and I know personally how hard it is to ... not just how hard it is but when your voice is silenced, to be told no."

Harry, too, described his own shame and confusion with her struggles and thoughts of suicide, explaining that he felt he couldn't turn to members of the royal family. "I had no idea what to do," he told Winfrey. "I wasn't prepared for that. I went to a very dark place as well. And I wanted to be there for her. I was terrified."

Markle has been vocal in the past about the stigma of mental health issues, notably encouraging others in a New York Times op-ed last November revealing her miscarriage to commit to checking in on those around you and asking the simple question: "Are you OK?"

In this most recent interview, she yet again chose to use the power of her platform to remind people who are hurting that they are not alone and that, though it can be difficult, there is no reason to feel shame in admitting that you need — and asking for — help when you can't deal with it by yourself.