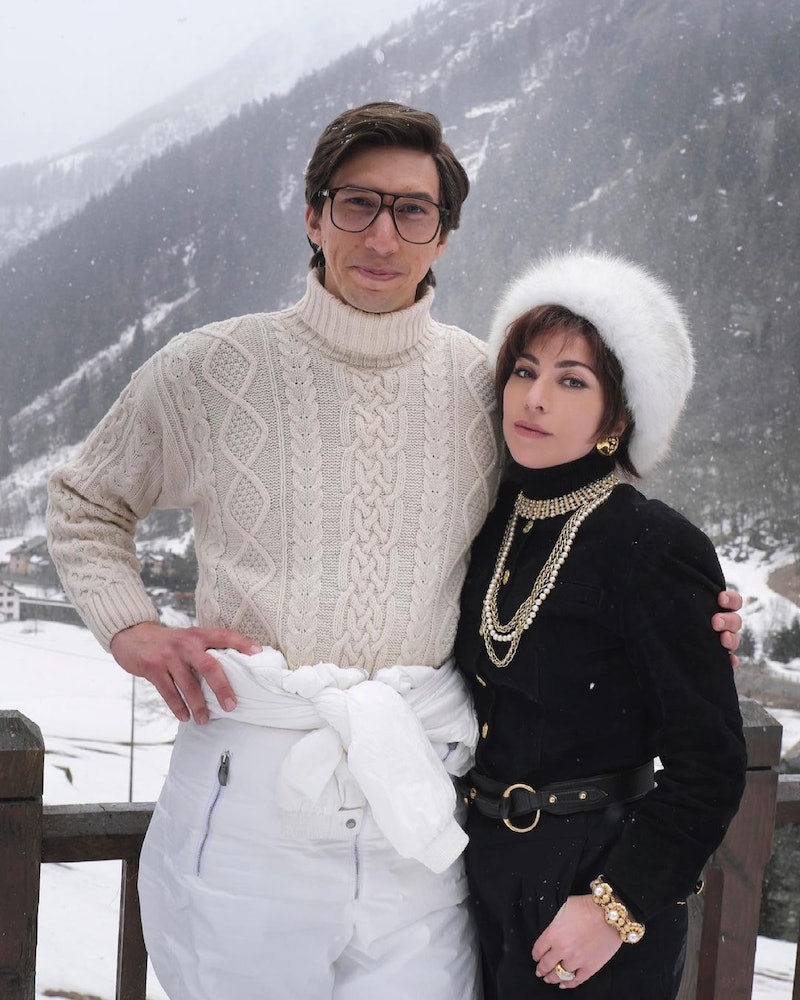 If you've missed seeing mother monster (aka Lady Gaga) on the big screen, you're in luck. The singer and actor is making her return to the big screen — the first film she’s done since her Oscar-nominated role as Ally in A Star Is Born (2018). Lady Gaga will be starring in House of Gucci, a biographical crime film from English film director and producer Ridley Scott. Scott — known for his work on memorable films such as Thelma and Louise, Gladiator, and Blade Runner — will explore the infamous assassination of Maurizio Gucci, grandson of Gucci founder Guccio Gucci, at the hands of Maurizio’s ex-wife Patrizia Reggiani. Gaga will play Patrizia Reggiani while Adam Driver will take on the role of Maurizio Gucci. According to The Hollywood Reporter, the Scott film has been in the making for over a decade.

On March 9, Lady Gaga gave fans a taste of what to expect, fashion wise, from the film. In the photograph shared on Instagram, she and co-star Driver were decked out in full costume and makeup as the famed Italian couple. Gaga wore a black button-up turtleneck with black belted pants and accessorized with a host of gold and silver accessories. Besides Gaga's furry white cossack hat, the other star of the show was Driver's cream cable knit turtleneck sweater. The cozy item was paired with a half-down ski jumper tied around his hips and he wore Gucci's signature aviator glasses. The outfit very much rivaled Chris Evan's own cable-knit delight in Knives Out.

House of Gucci marks the return of Driver to the big screen as well. He hasn't released any new projects since 2019, when he starred in back-to-back projects: The Report, The Dead Don’t Die, Marriage Story, and Star Wars: The Rise of Skywalker. After seeing the sneak peek above of the two co-stars, you’ll want to cross your fingers and hope for more gorgeous behind-the-scenes footage to be posted. Until then, here’s everything you should know about one of the year's most anticipated movies.

Based on the novel The House of Gucci: A Sensational Story of Murder, Madness, Glamour, and Greed by Sara Gay Forden, the film House of Gucci will look back on the murder (as well as its aftermath) of Maurizio Gucci, and the infamous rise and fall of his ex-wife Reggiani.

If you need a quick fashion history recap on Reggiani and Gucci’s relationship, here's what to know: Reggiani married Gucci in 1972. The couple soon had their share of success, from the birth of their two daughters Alessandra and Allegra to winning control of the Gucci brand in a high-profile court battle against other Gucci family members.

Their relationship took a turn for the worse, however, in the mid-80s when Gucci claimed he was going on a business trip to Florence, Italy only for his wife Reggiani to find out he was skipping town permanently to start a new life. The pair officially split in 1991, but the real upset to Reggiani was when her husband sold Gucci to Bahrain-based firm Investcorp for somewhere between $150 million to $200 million dollars. Fast forward to March 27, 1995, where a hitman fatally shot Gucci in his office lobby in Milan. This led to a murder investigation that lasted two years with Reggiani receiving a 26 year prison sentence in 1997 for playing a part in the murder. She was released from prison in 2014 and currently lives in Milan.

As you know, Gaga is playing Patrizia Reggiani and Driver takes on the role of Maurizio Gucci, but expect to see a lot of other A-list celebs involved with the film too. Oscar-winning actor Al Pacino, will play Aldo Gucci, the eldest son of founder Guccio Gucci. Jared Leto is also joining the project as Paolo Gucci, the son of Aldo. Academy Award-winning actor Jeremy Irons, who has recently starred in HBO’s Watchmen, has also been casted in a yet-to-be-announced role.

Over the past week, photos of Gaga and Driver filming in Milan have become available. In them, you can see Gaga channeling peak retro fashion. One photo featured the actress in a plaid trench coat accompanied with a colorful head scarf tied at her shoulders while another showed a close-up of her ‘80s blowout hairstyle that gave way to showcase her medium-sized gold hoops.

Unfortunately, it’s going to be a couple of months until you can take in this dramatic bit of fashion history. Currently, everyone is on location filming and the movie’s slated for release in theaters on Nov. 24, 2021. If you can’t wait to dive into all of the drama, however, consider picking up a copy of Sara Gay Forden’s The House of Gucci: A Sensational Story of Murder, Madness, Glamour, and Greed, which was used as inspiration for the script by screenwriter Roberto Bentivegna.

'The House of Gucci: A Sensational Story of Murder, Madness, Glamour, and Greed' by Sara Gay Forden
$16.99