This takes trust to a whole new level. 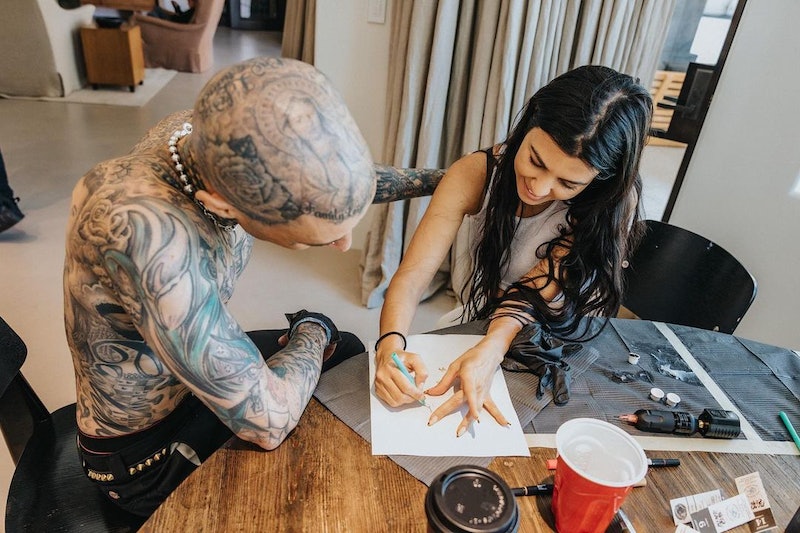 Kourtney Kardashian and Travis Barker just took their relationship to new heights. Case in point: This week, Travis Barker debuted a new tattoo done by none other than his beau. And naturally, it all went down on Instagram. On the evening of Wednesday, May 12, the Poosh.com founder posted a series of photos (as well as a video) of herself inking Barker’s arm to her grid, along with the caption, “I tattoo.”

The 45-year-old rockstar responded to Kardashian’s post in the comment section, writing, “🖤 Woman of many talents.” Additionally, he shared an up-close shot of the finished tattoo, which says “I love you” in a cursive font, on his Instagram Stories. Considering she’s not a professional tattoo artist, Kardashian did a pretty solid job, though it’s worth noting that she likely had help from someone who is an expert. A “chaperone” if you will.

It’s impossible to say how many tattoos Barker has at this point, as his entire body — including his head and neck — are covered in ink. Previously though, the singer reported having over 100. No big deal.

No surprise here: Fans and fellow celebs alike have inundated Kardashian’s comment section with messages like: “Looks so fire!” “Where can I book my appointment??” and “Honestly you have the best penmanship I have ever seen.”

Clearly, the celebrity couple’s relationship is going strong if Barker is willing to let Kardashian give him a permanent tattoo. That being said, time will only tell if Kardashian plans on getting one, too. Nevertheless, it’s nice to see the couple so in love and happy. Keep scrolling to see more adorable snapshots of the duo.