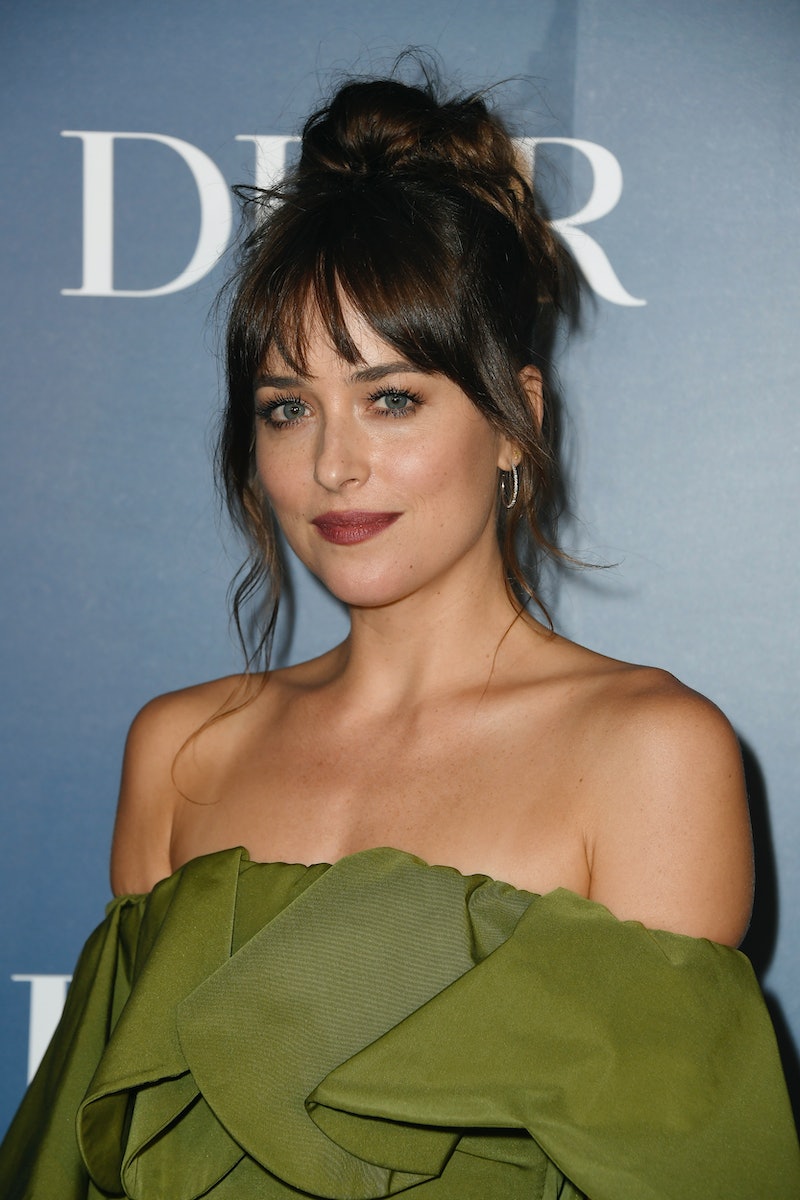 Getting bangs can be daunting thanks the endless list of variables that comes with the hairstyle: length, finishing, face shape, to part or not to part, and the list goes on. But if there's one style worth taking the chop for, it's cool-girl approved curtain bangs. The wispy, free-flowing look has been seen on many a celebrity's forehead, but after almost ten years of sporting the 'do, actor Dakota Johnson has expertly mastered how to style curtain bangs — which is why taking notes from her is a no-brainer.

Upon first look at Johnson and her curtain bangs, it may seem like the cut itself has too many variables. However, that is precisely why it's a great first venture into bangs; there's a lot to play with. The style is traditionally eyebrow-grazing and straight across with a bold part down the middle (hence the name curtain). But, as Johnson demonstrates, the 'do is made to be altered with varying lengths, parts, and accompanying styles. In 2015 she wore the look in a subtle manner with thin pieces pushed far from the center of her head, and now, the star is wearing the bangs with tons of volume and a slight part.

All that modification to her signature look is largely thanks to longtime hair stylist Mark Townsend — who is also responsible for Elizabeth Olsen's amazing curtain bangs (the man has a gift). Highly suggest following him for updates on Johnson's — and plenty others' — latest looks, but in the meantime, seven easily recreated ways the star styles her curtain bangs, below.

Nothing dresses up curtain bangs like an elaborate headband, and this look from Johnson’s appearance at the 2019 Met Gala is a shining example.

While typically swept across her forehead, Johnson grew out her bangs so they were long enough to frame her face.

Johnson sported a bob for some time, but kept her wispy bangs in tact. Here, she sports a wavy hairstyle with equally curled fringe.

One of Johnson's most recent iterations is an image you're going to want to save. She allowed the smallest of parts in her bangs and a full voluminous shape to mix glam and girl-next-door ease.

At the premiere of Suspiria in 2018, Johnson kept her bangs fully separated framing the face with longer, wispy tendrils. The in-between high and low bun also helps to put the bangs on center stage.

It's inevitable that curtain bangs aren't going to be split down the middle all the time. Let them take on different parts and side-sweeping motions for relaxed vibes.

In 2015, Johnson had the It-girl lob. Recreate this carefree half-up-half-down look with loose waves, a simple bun, and piece-y bangs to frame your face.

When the bangs are a tad shorter, pull down longer strands to keep the length and gather the rest into a messy top bun.

Johnson effortlessly pulls off the "I woke up like this" vibe with her natural wavy locks and bangs flowing seamlessly into them.

A high ponytail is never a bad idea. The actor pulled forward her entire bangs section, and for an extra polished detail, wrapped the ponytail with a strand of hair.

This article was originally published on 2.23.2020