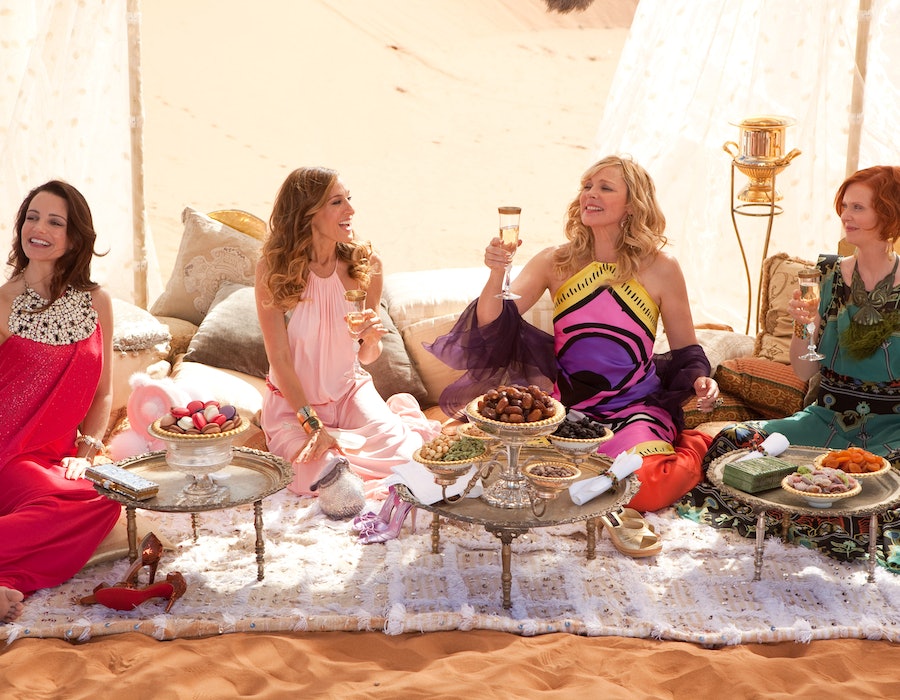 If the announcement of the SATC reboot earlier this year wasn't enough to get your nostalgia flowing, then maybe a throwback to the series’ most memorable quotes about men, life, and careers discussed while the four women drank and ate at some of the city’s coolest eateries will. Instagram account @anotherwomanssushi (named after the infamous scene in Season 5 when Samantha Jones uses eating sushi as a euphemism for performing a sexual act), meticulously documents and recreates the food from Sex and the City, which ran between 1998 and 2004. The page has had hundreds of loving responses, including one from Candace Bushnell (author of the book that inspired the show), who actually reposted one of the recipes, declaring she was “very obsessed” with the account.

Another Woman's Sushi is the brainchild of a 30-something Brit who only goes by her first name, Jo. During the first COVID-19 lockdown last year, Jo, whose day job centers on public policy in London, found herself bored and ready to challenge herself in the kitchen. And with the September 2020 launch of the Friends cookbook causing such a stir with TV fans, she couldn’t help but wonder, was there something similar for Sex and the City? To her knowledge, there wasn’t. So Jo began exploring the food featured on the series and challenged herself to cook one dish from each episode or from one of the franchise's two full-length films. She documented her culinary adventures on Instagram and started to gain a small following.

“I had in mind one of my favorite movies, Julie & Julia, about a woman stuck in a similar rut who challenges herself to work her way through the entirety of Julia Child's Mastering the Art of French Cooking, and writes a blog about it,” Jo tells TZR. “I used hashtags to try and promote it a bit, but purely because I just thought there must be likeminded fans out there who enjoy both cooking and SATC, and I wanted to share the recipes in case anyone else found them useful or fun.”

When the series aired its final episode in 2004, it cemented its place in pop culture history. And its impact has been reverberating since. It was a pioneer of a TV series featuring women candidly talking about sexuality from their perspective on cable TV. While many of the show's plots and episodes may not have aged well in the 17 years since the SATC last aired, its overarching tone of love and friendship still connect people, including Jo and her circle of friends. “It is still a go-to for me and my girlfriends whenever we're hungover, stressed, or just want to watch something comfortingly familiar,” she said.

How did you come up with the name for your account?

I chose it pretty randomly! I guess I was just thinking of having a name that was some sort of reference to iconic food moments from the show. I considered various things like “Miranda's Garbage Cake” or “I Couldn't Help but Cook” but I just think the “another woman's sushi” moment is so classic and hilarious. I also liked that it was an iconic food moment that wasn't actually about food, so it's a bit of an inside joke [for fans]. I thought it said so much about how significant food is to [the women] that they often integrated it into the sexual wordplay, from the big pepper mill in Season 1 to the guy Charlotte dates who suggestively licks pieces of fruit, but the 'call it sushi, another woman's sushi' moment was my favorite.

What role do you think food plays in the series?

The city of New York has always been described as the fifth character [of the show]. If that's so, then food and drink have to be the sixth. Despite the women being frustratingly slim, which I am absolutely not after this experiment, they all love to eat. And so many key moments and conversations take place over food and drinks.

I think it's absolutely part of the underlying feminist message of the show that these women are shown having real lives and that includes struggling to eat a sandwich in the park with no table or going for a slice of pizza because the fancy vegan raw food you ate at dinner didn't fill you up. I think the fact that so much of the food and drinks the girls enjoyed became instant trends shows how receptive viewers were to this sort of representation of women.

And then there were all the food trends that came from the show.

The show single-handedly initiated so many massive food trends, from Cosmopolitans and Magnolia Bakery cupcakes, but also the concept of brunch, which I think was far less well-established and commonplace pre-SATC.

What are your favorite food scenes in the series?

That's a tricky one as there's so many. I am absolutely a Miranda at heart. My husband was even a bartender when I met him! And I relate so much to her, in particular the iconic moment when she gobbles up Robert's awkward big cookie, and of course, when she eats the cake from the trash.

I also love the episode when Carrie shows up at Big's in a beret with bags full of McDonald's food for some unexplained reason and gets into this rather manic argument which ends with her throwing a Filet-O-Fish at the wall. It's a very sad and serious moment but with this hilarious juxtaposition of her looking so cross in her little hat with breaded fish smeared across his stylish kitchen island. I also love the banana split from the night Carrie gets arrested for smoking a joint, when you see Samantha and Carrie woozily high and surreptitiously trying to get the ice cream away from each other. It's adorable.

How do you develop the recipes?

Generally, I would find a few different recipes and combine various elements of each based on what I think would be best. The main goal was just giving me something to do and making my mealtimes more interesting, so I was largely motivated by my taste and preference.

Some of the episodes gave me a chance to use recipes I have made many times and perfected to my own preferences over the years, such as the chocolate chip cookies and the truffle cheese nibbles, which are my own invention. Other things were a major challenge and required a few tries to get right, like the bagels. Some things were classic recipes that can only be made authentically one way, such as boeuf bourguignon, fortune cookies, risotto Milanese, so I didn't mess about with these too much.

Some of the recipes were re-created quite faithfully to the show, while others were more of a creative interpretation. What was the thought process behind that?

I was limited by how many times I could afford to make, or bear to eat, the same things multiple times, so there are some recipes that I would love to go back and perfect some more.

At the start I tried to be really faithful and mimic exactly what they ate in the show, but followers seemed to respond positively when I got slightly more creative — such as making an Earl Grey tea flan for the episode that featured both Carrie eating a fancy flan when out for dessert with the girls and Harry leaving his 'teabags' all over Charlotte's apartment — that was fun.

Are you a chef or a home cook?

I am a very enthusiastic home cook. My husband and I are both big foodies, and it's the main thing we have in common. We certainly love food-related activities like tastings and cookery classes, so I've done a bunch of one-off lessons including butchery, sushi making, mozzarella making, Mexican cookery, and pasta making. But I have absolutely no formal training.

Have you been to New York?

I first went to NY when I was 19 with a couple of girlfriends from work. We did the SATC bus tour which we absolutely loved. There was a trivia contest and the winner won a box of Magnolia cupcakes and I won, much to my friends' embarrassment!

I went back about six years later as a friend from London moved out there for work, and again in November 2019 as my brother took a job there so we helped him get moved in. I was hoping for lots of visits to him last year, but obviously COVID-19 put an end to that.

Why, after all these years, does the show still resonate with you?

For me, what resonates today is the role the show has played in my past. I grew up in a small rural village — think Kate Winslet's place in The Holiday — and went to religious schools so the education I received about sex and relationships was generally designed to scare and control rather than educate and empower. I don't recall too many inspiring examples of women being powerful and authoritative and getting what they want in the media I consumed or in the people around me. You rooted for Carrie, Samantha, Miranda, and Charlotte because they were flawed, complex, real people and not the two-dimensional portrayals of women so common in media at the time.

I have no doubt that someone watching it at 16 today would find it at best uninteresting or at worst offensive and, of course, held up against today's norms and values, it certainly is. Also, I think there's much better progressive and empowering programming aimed at the younger generation today than there was when I was a teenager. But I am a believer in using nuance and common sense to allow us to appreciate art made in the past for what it is instead of wiping it from memory.

I've tried to acknowledge this in the captions of my posts. For example, enjoying the delicious 'flirtini' cocktails on Samantha Jones' roof and being completely upfront about how the language used in that episode is absolutely not something we could consider remotely acceptable today. For me, it is all about how comfortingly familiar the show is to me, how the characters feel like old friends who gave me something to aspire to in my teens and 20s when around me all the girls seemed to be focused on pleasing men, getting married and having babies. I wanted a powerful career like Samantha and Miranda.

But many have criticized it for its lack of diversity.

The show is rightly criticized for lacking in diverse representation. I am very conscious that I am speaking from a position of white, middle-class privilege when I say that I could relate to what the women were going through. I'm sure if you were watching from a different perspective to the four very similar women the show centers on it might not have obvious appeal or relatability.

But, particularly towards the later seasons, as the women grew up, there were a lot of core themes there that so many of us can relate to — how devastating it is when you argue with your best friend, getting divorced, financial worries, single parenthood, and cancer. Yes, these things are a lot easier to deal with when you have lots of money, but I think they are things that all of us can expect to experience in some form at some point fundamentally.

What are your thoughts on the upcoming revival?

I am very hopeful about the new series and think that was definitely a better idea than another movie attempt. It is a shame it won't include Sam, but I'll absolutely still be watching and taking recipe notes!