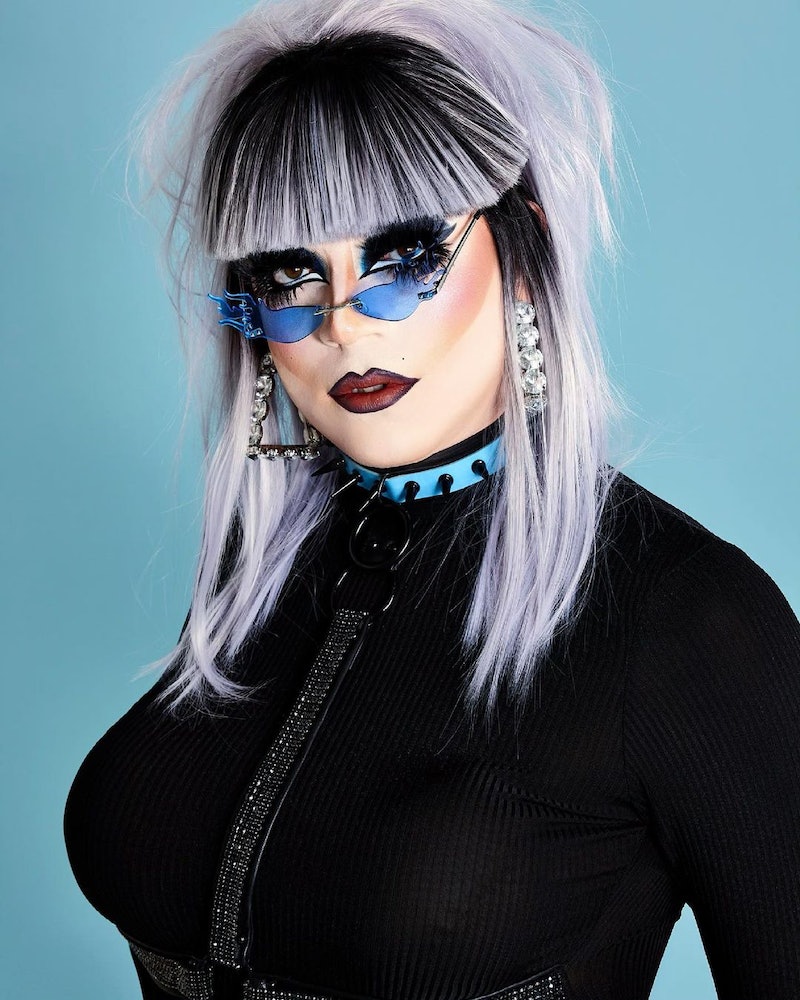 You’ve likely heard of RuPaul’s Drag Race or tuned into a few of the episodes, if not consumed the entire 13 seasons. The show has produced notable cultural icons such as Trixie Mattel, Bianca Del Rio, Alyssa Edwards, and Shangela. Aside from listening and learning about these well-known queens’ personal stories, however, it’s important to know that these celebrities are the tip of the iceberg. An iceberg with a complex history, roots, and diverse community. There are a multitude of voices and faces within the drag community — especially people who, while preferring to fly under the radar, find joy in dressing up and exploring their own identities within the vibrant drag world. They may not have a million followers or even perform full-time, but these individuals are instrumental in helping the community flourish and thrive.

In speaking with TZR, three such figures — Dot DeVille, Cupid Bowe, and Miss Ma’amShe — chronicle their personal paths to drag royalty. They share everything from where they shop to how they came up with their fabulous names. They also touch on harder-hitting topics like what it was like to reveal this side of themselves to friends and family. Check out their stories below, and give them a follow on Instagram. Hail to the queens.

The name is actually short for the name Dorothy, which pays homage to the euphemism ‘Are you a friend of Dorothy's?’ The term [which dates back to World War II] was used by gay men at a time when being gay was illegal, so that they could sus out other gay men at bars without being detected by straight people. It was like a code question that they could ask one another. I chose the name Dot because I thought it was a nice way to pay respect to the LGBTQ history. The last name, DeVille, comes from my drag mother, Vicky DeVille, who is an AFAB Queen.

I started in September 2020, six months into lockdown. I turned 30 in lockdown, so I was going through a larger existential crisis of mortality/life and the timeline of certain goals that I had set for myself. I just didn't want to get to a point in life where it was too late to start doing drag at the level at which I wanted to do it.

Since I have a full-time corporate gig, I only have time to do drag after 6 p.m. on weekdays and on the weekends. Getting into makeup takes about an hour and a half. Then the wig, body, and everything else is usually another 30 to 40 minutes. All in all, it takes about two and a half hours to go from myself to Dot DeVille.

My inspiration comes from women in ‘90s sitcoms. Loud, white women specifically. Mimi Bobeck from The Drew Carey Show was someone who I always was fascinated by. I loved her bright colors. I loved her insane makeup. I just loved how loud, brash, and unapologetic she was. I also really love Peggy Bundy from Married... with Children, Fran Fine from The Nanny. I'm still very much in the experimental phase [in figuring out Dot’s look], but Dot definitely loves mullets, she loves color, animal prints, and glitter. I [also] watch a lot of makeup tutorials on YouTube like RuPaul Drag Race’s “Ruvealing the Look,” [to learn how to do makeup].

Where do you shop for your drag attire?

Fashion-wise, to be honest, I can't wear anything off the rack. I'm 6 feet and 3 inches with a 36-inch waist. When I put on my hip pads, I'm an enormous woman with proportions that don't really exist in terms of height and scale. So everything that I [wear] is custom. Luckily though, my husband is a fashion designer, so we work together [on my outfits]. Being in New York City, there are lots of stores that are at my disposal. I shop [for fabric and materials] in the Garment District and I’ll go to Spandex World, Mood Fabrics, B&J Fabrics, and M&J trimming.

I wear a size 12 men's shoe, which by rule of thumb would mean a size 14 in women's [sizes], but in actuality I'm more of a size 15 because I have wide feet. I get a majority of my shoes from Onlymaker. I get a lot of my jewelry custom made because I do have a thicker neck and my wrists are larger than most women's wrists. I find people either on Instagram or Etsy [for this].

When I started college, I noticed that people would misgender me a lot as a woman and I didn't really mind it at first — it was something I dealt with because I have a very soft voice and I have feminine facial features. There was this one day in class, a friend of mine, we were in the initial stages of getting to know each other, and she would constantly accidentally call me she or her and I'd be very nice about it like, ‘Oh, please. Oh, actually, it's not.’

I don't know if maybe other people who have been misgendered feel this way, but sometimes it's not even being misgendered, it's how the person reacts when you say, ‘Actually it's not that.’ There was this very big reaction of, ‘Oh, my god, I am so sorry. I just don't understand why I did that,’ where the person draws attention to it. [My friend kept calling me she/her] and then one day, I just turned around without thinking and I said: ‘You know what, don't even worry about it. Why don't you call me Miss Ma'amShe.’ I said that out loud and I was like, ‘Oh my gosh, that's a cool name. That should be a drag name.’

Miss Ma'amShe has become a part of who I am at this point. I'm not fully her all the time, though, because I do like trying to have my own life outside of drag. But, becoming her gives me confidence — through her as my character, I just own it. Now if someone mistakes me for a woman, I'm just like, ‘Thank you so much. Let's keep walking.’

I started at the very end of August in 2019, so it’s been almost two years. I don’t dress up in drag often, maybe once or twice a month, because I’m focused on working and saving money. I work 12-hour days, five days a week. It still takes me about three hours [to get fully dressed up]. People don’t talk about this much, but drag is expensive, even when you want to do it for fun it costs money. You have to buy the outfits, wigs, and then there are Uber fares if [you’re going to an event or show] because, for safety reasons, I never go on public transportation while in drag.

I want to channel hyper femininity for my drag, to show people that even though I am a plus-size person, a bigger person, I can just as easily put on a sexy outfit like anyone else and feel beautiful. Personally for me, I want to feel very soft, very feminine. When you become a plus-size queen, people think, ‘Oh, you're going to be campy.’ I don't want to define camp because everyone does that differently, but what I mean is [your look is] exaggerated, like for a Broadway number. So, a big thing for me is that I don't wear stage makeup, I wear everyday makeup. I learned how to apply it from my drag mother, Iodine D. Quartz and from watching YouTube videos. Learning how to put on eyeliner was so hard for me because I have hooded eyes — and my drag mother doesn't, so I had to figure that out on my own.

Do you feel safe in your community while in drag?

For me, the biggest thing is I take cars everywhere when I’m in a drag. I don't feel comfortable walking around in public because sometimes you do get stopped on the street. [This one time when] I wasn't in drag, but I was walking with my drag mother to a gig and some man just stopped us and said, ‘What the f*ck are you? Are you an effing clown?’ In that moment, we just kept walking. This person was almost ready to start following us, but then someone stopped him. Things like that, it can just happen in a second. I've only ever done drag in Brooklyn, [New York City]. It can be scary because the bars there are far apart from each other and, at night, you just never know. I see a lot of people reposting [stories] on Instagram like, ‘I was attacked last night’ or, ‘Watch out for this and that.’ I'm a nervous person, so I like to go out and have my fun, then head straight home in a car.

I kind of already had a nickname for myself. I called myself Eros, which is from Greek mythology. The Roman counterpart of Eros is Cupid. My drag name feels androgynous, since I wanted my drag persona to be both masculine and feminine. I always knew exactly how I wanted to express myself when creating my persona as Cupid. She's fun, flirty, sexy, but like a goofball at the same time.

I've always been a big admirer of drag. I love local drag and I’m obsessed with RuPaul’s Drag Race. It wasn't until I saw season 10 of the show that I got inspired because I saw someone with the same body type as me. I have more of a masculine-esque body, so I just always thought that excluded me from drag. I started doing drag two years ago and I'll dress up any day that I have the time, which is usually on my days off or at night. It takes me a total of three hours to get dressed and ready.

When it comes to beauty, I take inspiration from friends, customers, relatives, and RuPaul’s Drag Race. I definitely did a lot of research on like performance-based looks because I'm heavily invested in that. I would do research on different fabrics, how it moves, how breathable it is because I do, unfortunately, sweat a lot. Honestly, when I started wearing makeup, I just threw myself into it and found that I wasn’t bad at it. I'm a visual learner so I can just study a look and emulate that.

Do your friends, family, and colleagues know you dress up in drag?

My friends were the first to know and were very, very supportive. Two of my closest friends actually film a lot of my digital drag because I am extra and I like a whole production. I can't film everything by myself, so they help a lot in that part. Another friend makes my wigs, so she’ll help me with styling and send me looks for inspiration.

My family knows I do drag — my sister is a very big fan of Cupid and is her biggest supporter. My mom knows I dress in drag and she likes to see pictures and everything, but it is definitely something she’s still understanding and learning about. She watches RuPaul’s Drag Race and sees that this goes beyond just being a hobby — you can be very successful at drag. It’s strange because I’m so used to keeping all that stuff away from her, but now that’s slowly changing. Colleagues wise — I work as an assistant manager at Piercing Pagoda — they all know I dress in drag. Actually, I went into work in drag recently and they loved it.