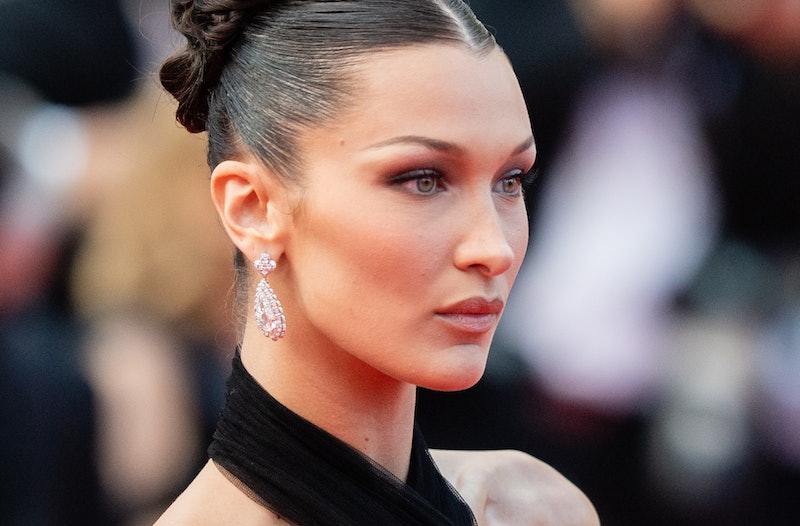 While there are plenty of opportunities for Hollywood’s finest to dress their best all year long, there’s something special about the Cannes Film Festival. The annual event’s sophisticated feel can probably be attributed to its luxurious location in the French Riviera as well as the celebration of culture and the arts. Every year, celebrities go above and beyond to bring their chicest looks, and this year’s 74th annual festival is certainly no exception — just ask Bella Hadid, whose makeup look stunned on the 2021 Cannes red carpet .

Rather than dabble in the experimental or exceptionally trendy, celebs tend to bring classic elegance to the event. Hadid’s past Cannes moments have shown her softer side, but this year the model stunned in a structured Jean Paul Gaultier gown with a sheer black halter neck and train, which originally went down the designer’s 2002 spring/summer runway on none other than Naomi Campbell. But perhaps the most striking element of Hadid's festival look was her smoky, contoured makeup.

The model’s makeup masterpiece was created entirely with Dior products and harkens back to the matte looks of the ‘90s and early 2000s. The deep smoky eye added an element of glamour, while her arched eyebrows framed her face perfectly (and further prove that the return of the thin eyebrow trend is upon us).

Dior’s Forever Skin Correct concealer helped brighten and perfect Hadid’s skin, while Backstage Powder-No-Powder set everything in place and created the matte effect. The model’s lip appeared to be a nude matte shade, but Dior Addict Lip Glow in Pink added a subtle touch of hydration. Hadid’s signature razor-sharp contour was also present, adding to the overall drama of the look.