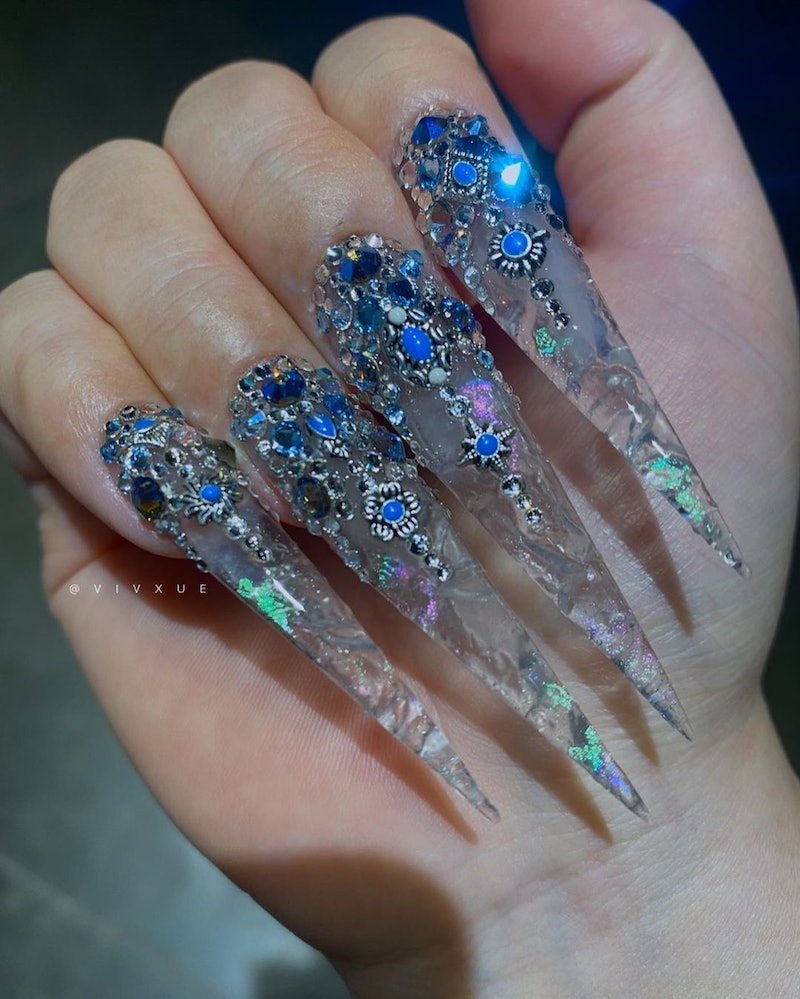 Not all people consider acrylic nails to be worthy of fine art status, but those naysayers have never laid eyes on the work of rising nail artist and founder of Pamper Nail Gallery Vivian Xue Rahey. She creates acrylics and press-ons that are entirely one-of-a-kind, and so elaborate and sculptural, it hardly seems possible that anyone could create such jaw-dropping designs to wear on the tip of your fingers. But, for her 1.3 million followers on TikTok and the 289K she has following her work on Instagram, there is no denying her exceptional nail art skills. Taking a scroll through either social media platform is proof enough that Rahey is reimagining what is possible within the nail world.

While she’s among the industry's top up-and-coming artists today, Rahey never actually anticipated a career in beauty. In fact, when asked if she always knew she wanted to be a nail artist, she immediately lets out a chuckle. “I actually started off my career as a software engineer,” Rahey giggles. She launched a software startup to begin her career but pivoted to the nail industry full-time soon after that.

As she was building the tech company, the Bay Area artist would do her nails as a way to decompress. And at the time, Rahey was looking at photorealistic Disney character designs on Instagram and Pinterest from a few Australian and New Zealand artists. So, the former tech enthusiast took a stab at these designs herself, and, with zero fine art training, was soon able to create nearly exact renderings of the original cartoons. This skill and passion eventually led Rahey to open her business, Pamper Nail Gallery.

Shockingly, Rahey didn’t receive any professional training in nail art prior to opening her salon. “[I] was mostly learning more about the nail industry and realized that there is no real training that you can receive — especially not the stuff that you see online that’s really, really popular,” she explains, referencing the complex designs that first sparked her interest. “In nail school, they just teach you how to get a license — and even so, they don’t really care about the quality of the work you put out.”

She gained the necessary knowledge to open her salon and start creating her acrylic designs by hiring industry professionals to consult and train other licensed nail techs in the salon. “I think the biggest realization is there’s such a gap between what is taught and what people would actually like to learn,” the expert notes. “That’s why we teach classes now to make nail art more acceptable as an education for people who want to offer it to clients.”

Sadly, Rahey had to close her San Francisco at the beginning of the pandemic (like so many small business owners were forced to do), but that allowed her the time to focus on developing the press-on nail business (all of which you can purchase online). “[Press-on nails] are a lot more conducive to doing a lot of elaborate art because those take a long time, and not everyone has the time or capacity to sit there for eight hours while you draw a portrait on them,” she explains.

The process of creating these miniature works of art is incredibly painstaking and tedious, hence the higher price point. “The majority of the sets we sell fall around $250,” she says. “But, we’ve had sets go as much as $2,400.” For something like eight photorealistic portraits of the Marvel Avengers (which a customer has requested), she says that the process can take around 20-24 hours. Of course, not every set is that detailed, with the average time landing closer to two hours to complete. Still, these press-ons are not your average French manicure, and are priced accordingly.

As you can imagine, the nail artist has received some pretty wild requests for nail designs. “Once we used TikTok as a platform to tell people they can do whatever, they’ve been going ham,” she explains. The most out-there commission yet? Porn stills. “I’m not sure if she works in the adult entertainment industry, but that was a crazy one,” Rahey laughs. “She actually sent us screenshots [to reference] to paint on her nails.” On top of that *unique* inquiry, Rahey often gets asked to create movie-inspired art. “We had this girl who had a really cool Singing In The Rain themed wedding — it was very non-traditional, she had a blue velvet dress — so we did scenes from the film and it was very retro looking.”

In fact, TikTok is now her preferred place to display and discuss her art compared to other forms of social media. “I think the story capacity of TikTok makes it much more relatable, as opposed to where people are commenting on Instagram like ‘those are stickers!’ and you’re like ‘no it’s not, I painted it!’,” she explains. “They didn’t see the process so they don’t know.” If you’re an avid user of the app, chances are one of Rahey’s videos has landed on your For You Page already. Read: her video of a Shrek nail design has garnered over 15 million views (NBD).

As for the designs that she’s working on currently, the artist takes a rather unique approach to finding inspiration. “It’s whatever movie I happen to be watching, or what I’m obsessed with at the time,” she says. Even something as simple as Gain laundry detergent (which she professed an affinity for) can spark an idea for a new set. Rahey feels that that’s what nails are all about — to be enjoyed and to feel fun. “It's really the only beauty thing I feel like is very accessible to people of all body types and ethnicities,” she adds.

If you’re itching to customize your own pair of Rahey’s TikTok-famous nails, you’ll want to make sure you can wear them for as long as possible. According to the brand’s website, a pair of nails can typically be worn 10 times, but Rahey says that ultimately depends on how you care for them. “Mostly it’s about educating people on how to take care of their natural nails,” she says. “That’s going to improve the longevity, and I know there’s a lot of people who have trouble with press-on nails simply because they don’t keep their nail beds healthy.”

Priority number one to maintain healthy nails? Removing the press-ons properly. To do that, she says it’s key to be patient. “For these press-ons, you soak them off in warm water and baby oil, and it loses the adhesive underneath.” Her other tips for making the press-ons last as long as possible include pushing your cuticles back and not apply too much glue during the application.

Below, shop some of Rahey’s most popular press-on nails this season. And if you’re in need of some inspiration on what to choose, just check out her TikTok — but prepared to lose an hour or two.