They also look better than their plastic counterparts. 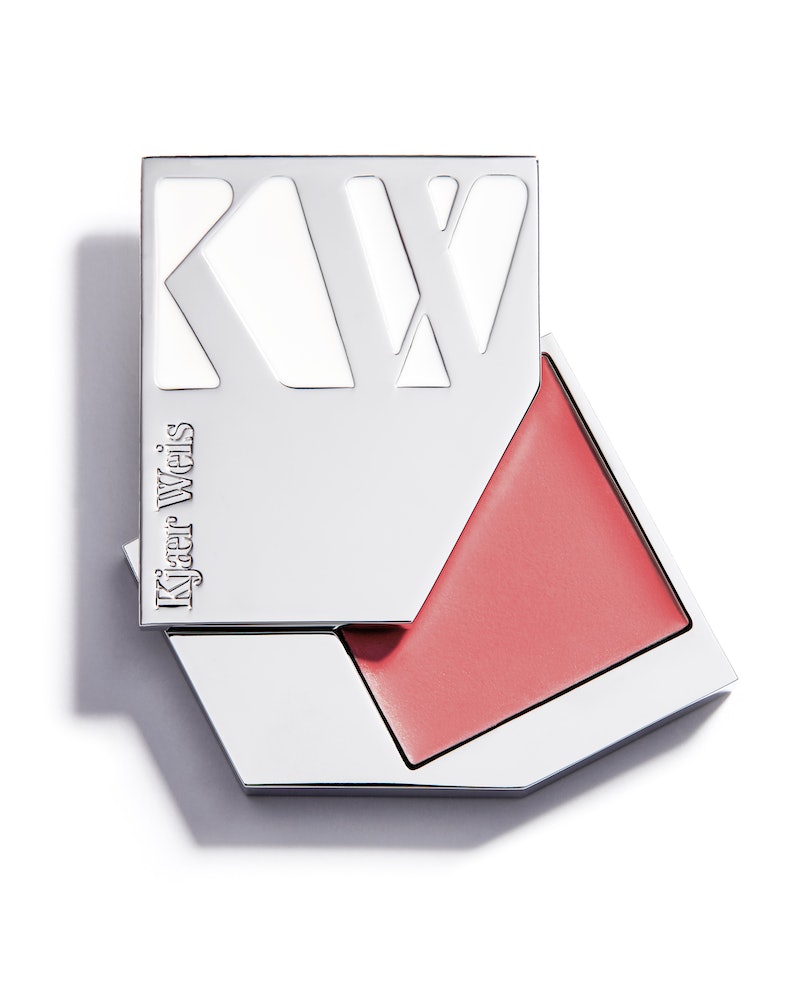 For any beauty lover, there’s nothing more satisfying than ripping off the cellophane of a new product, taking it out of its box, and marveling at the beauty of its design. It’s pure ASMR fantasy and the anticipation of the first pump, spray, or swatch is deliciously intoxicating. But as much joy as unboxing brings, the world is in the midst of a climate crisis and the beauty industry contributes to the problem. Packaging isn't just bottles and tubes, but also includes lids, caps, pull tabs, layers of protective cardboard, and tiny plastic spatulas. How much less waste would be produced if you could refill a cosmetic product instead of buying an entirely new one?

Apparently, close to 70% less, according to the LCA Centre. In 2018, 120 billion units of plastic packaging were produced globally for cosmetics, and in the U.S. alone, almost 8 billion units of rigid plastic were created for beauty products, according to Euromonitor International, with most of it ending up in the landfill. Only 9% of all plastic waste has ever been recycled. And since the outbreak of Covid-19, a recent report found that beauty companies were showing “less sensitivity about single-use packaging, additional seals, and shrink wraps."

However, not all news is bad. Many beauty brands are incorporating sustainability at the forefront, offering refill options to eliminate unnecessary waste that comes with buying an entirely whole new product. Charlotte Tilbury and Guerlain are tackling waste by creating a refill option that pop in and out of metal cases with decorative, interchangeable lids meant as keepsakes. All of La Bouche Rouge's products are housed in plastic-free cases that are completely recyclable, and Surratt Beauty's iconic Auto-Graphique eyeliners offer refillable ink cartridges to reduce waste. After decades of buying single-use plastic compacts, the idea of buying a non-disposable case and replacing only the product inside may seem novel but it actually has roots in the history of 20th century makeup.

The first use of makeup can be traced back to the Egyptians, but it was in the 1920s when the use of pressed powder became common. Women were entering the workforce and needed a travel-friendly powder to carry on-the-go. Cosmetic "companies started to press powders into tablets that were put into compacts,” makeup historian and Bésame Cosmetics founder Gabriela Hernandez tells TZR. “But they were always refillable because compacts were sold without the fill.”

The first iteration of mass market compacts was made entirely of brass which women carried around to powder their noses. It soon started to become an important accessory for women, and as the Art Deco period kicked off, jewelers were being commissioned to create more opulent cases for their wealthy clients.

“The Art Deco period was a celebration of mankind’s advancement in technology and we see that play out in jewelry,” Lexy Damianos, junior specialist for Christie’s Jewels, tells TZR. “Jewelry designers [were] looking to be more cutting edge and advanced, and they [were] looking to bejewel everything. We start seeing a lot of examples of cases, compacts, minaudieres. And women were increasingly mobile at the time and didn’t want to stop their accessories at their handbag. They thought 'why not continue to bejewel everything in my outfit?'”

Iconic jewelry brands Cartier, Van Cleef & Arpels, and Boucheron created bespoke compacts and lipstick cases for their respective clients, which were often embellished with precious stones including diamonds and sapphires to highlight not only their clients' wealth and taste, but also the jeweler’s eye for detail and craftsmanship. Socialites and Hollywood actors such as Gloria Swanson would often be recipients of these gifts and would fill them with their choice of powder or lipstick.

In the 1940s and '50s, actors wore their own jewelry in films and the same pieces might be worn to the premieres and parties. Accessorizing for these events was an opportunity to showcase their glamour — “if you’re going to have a beautiful couture gown why wouldn’t you also have a beautiful bejeweled compact ... for the evening?” said Damianos.

The materials, stones, and quality of these compacts made them collectibles, in which many were passed down and auctioned off, still today, commanding a solid five figure. They were far from your throwaway pieces, but the fashion for jewel-embellished makeup cases began to wane in the 1960s with the rise of plastic.

“In the '60s, you start to see a lot more plastic,” said Hernandez. “All the mass market brands went into plastics and things were being manufactured in different countries. It was definitely cheaper.”

In 2017, Christie's in London held an auction featuring personal items that once belonged to Hollywood royalty Audrey Hepburn. Her two sons put the items up for sale and verified their authenticity. One of the most coveted pieces was Hepburn’s Cartier lipstick case from the 1950s. It was a structural 18k gold case with a cushion shaped cabochon sapphire thumbpiece that you press to reveal the lipstick. On the bottom were here initials, A.F., which stood for Audrey Ferrer, her married initials. Hepburn wed actor Mel Ferrer in 1954 and according to Damianos, “It’s very likely it was a gift from him to her or she had it commissioned at Cartier to celebrate her marriage; it's a bit hard to say for certain. But with the A.F. inscription, it’s probably tied to their marriage.”

Christie's estimated the piece to sell between £2,000 and £3,000 but a bidding war ensued, and it eventually sold for £56,250 to makeup artist and historian Lisa Eldridge, who revealed in her YouTube video that when she picked it up, a small piece of Hepburn’s lipstick was still inside the case.

“It was a very desirable piece because of its provenance and who it belonged to,” Damianos said.

While not everyone can carry a jeweled Cartier compact or a lipstick holder à la Ms. Hepburn, brands today are more thoughtful when it comes to creating beautiful, long-lasting makeup cases that reduce waste but not the glamour.

TZR asked celebrity makeup artists Joyce Bonelli, a long-time fan and collector of vintage Art Deco compacts, and Nick Barose, whose clients include Lupita Nyong’o and Tracee Ellis Ross, to select their top picks of the prettiest refillable makeup cases. Barose is so dedicated to old world glamour that he has been known to gift his clients with refillable powder compacts with their names embossed on the case in gold before big events such as the Oscars and the Golden Globes.

“Make-up compacts for Old Hollywood stars like Jean Harlow, Marlene Dietrich, and those in the 1930s and '40s were used and shown off a lot on sets when touching up so it was also an accessory,” Barose explained. “It’s almost the same way we’d pay to have fancy iPhone cases made today. It becomes an accessory and status symbol.”

Read on for Bonelli and Barose’s favorite refillable products that are not only nice to look at, but less wasteful, too.

“This is my ultimate favorite. The leather is so beautiful and luxurious, and the lipstick itself is so brilliant. It’s got amazing pigment — I love their nudes and their reds,” said Bonelli.

Not only does this nourishing lipstick boast Saint Suliac seaweed and three oils — virgin jojoba oil, squalene ,and shea butter — to keep lips hydrated, it saturates the lips in the most sumptuous hues in a matte finish. It’s cruelty and plastic-free and housed in a beautiful leather case handmade in France.

“It’s sleek and the small rectangle evokes quiet elegance. And, it’s black so it’ll go with anything,” said Barose.

Its black lacquer packaging is discreet, slim, and refined. Serge Lutens’ finely milled press powder foundation offers matte coverage erring on a more natural finish so you can do touchups throughout the day without it looking too heavy. The shade range, however, is a bit limited with only 10 options.

“I usually cherry pick things from each brand, but if there was one brand from where I had to use everything it would be either Dior, Hourglass, or Serge Lutens — everything is amazing,” said Bonelli.

The brand’s iconic lipstick was created in 1953 and relaunched recently in a refillable case as part of the brand’s sustainability efforts. The original lipstick was refillable but over the years went through different iterations of packaging. The newest edition features a beautiful black case with a silver trim and the initials ‘CD’ as an homage to the brand's founder. It comes in 75 shades in satin, matte, metallic, and velvet finishes, but only the brand’s signature 999, a striking crimson, is available in all four.

“The compact is so glamorous and the red lacquer will definitely turn heads every time you pull it out,” said Barose.

Cushion foundations are the ultimate travel-friendly option – they won’t crack like a powder or spill like a liquid. This lightweight formulation gives skin a natural glow-from-within finish. It’s super buildable, transitioning from light to medium with ease, and on good skin days, concealer is not necessarily required.

“The cream blushes are really great for less coverage for every day and I love their packaging,” Bonelli said.

When Kirsten Kjaer Weis launched her brand in 2010, she was one of the pioneers in championing eco-consciousness in the luxury beauty market with refills sold separately from their original cases. Bonelli loves the brand’s cream blush that gives faces a healthy flush and keeps skin hydrated.

“Bésame's refillable compact look like those classic vintage Hollywood compact. They're gold and deep red with the precious flower on top [that] will make powdering your nose feel like a movie star moment every time,” Barose told TZR.

Barose suggests Bésame’s signature refillable compact for those looking for something reminiscent of what starlets carried in Old Hollywood. The gold octagonal case is a direct nod to the Art Deco era. It can sit in its satin-lined box for the vanity like an object d’art or in its lush velvet satchel to protect the compact from scratches when on the go.

“Hourglass has always been one of my favorite brands. All of its makeup is absolutely stunning, from its textures and pigments to color,” said Bonelli. “I can never go wrong with Hourglass.”

This gold lipstick case looks a bit like a vintage cigarette holder and can be used interchangeably with all 40 colors in the range. The slim tip of the long-wearing lipstick allows for precise application whether you’re contouring or defining your lip. And it’s smudge-proof, making it the perfect option under a mask.