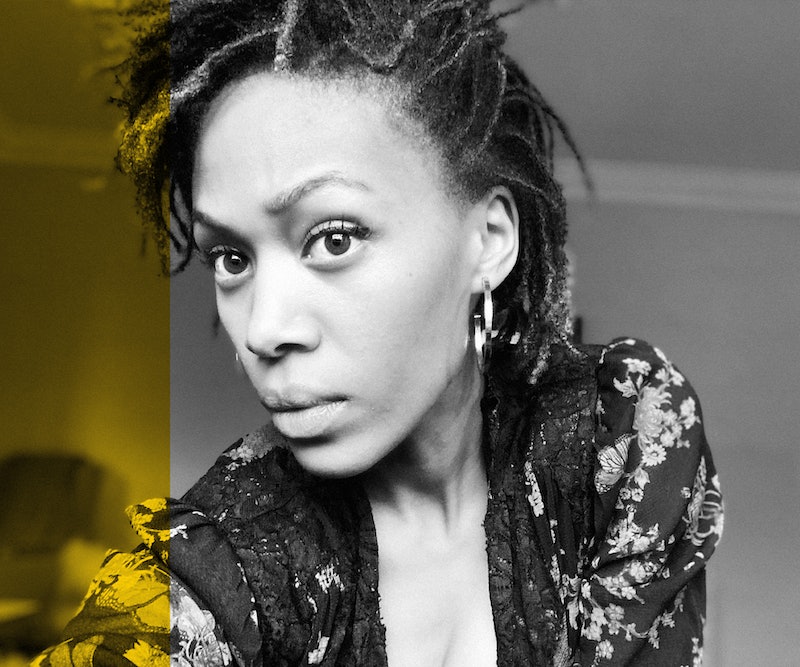 It’s not often that that the intersection of protective styling and relaxed hair is discussed, but for actress Nicole Beharie, star of Sleepy Hollow, Miss Juneteenth, and Black Mirror, it’s exactly what defined her childhood. “I remember back in the day when I wore braids and twists and people would make comments about it being nappy,” Beharie tells TZR. “My mother's Jamaican and people used to think that it was like an immigrant thing.” And while Beharie’s mother instilled in her the beauty and versatility of protective styling, she didn’t always embrace those options with her own hair. “My hair was actually relaxed growing up because my mom found my hair to be more manageable with it,” she says. “But even though I had a relaxer, I never wore it straight.”

At 16, Beharie went off to art school and decided to give her natural hair a try, but it wasn’t an easy transition. “I remember a friend of mine was like, ‘what are you doing?’ because I didn’t know what to do with my hair,” she says. “So I cut it off. But the boys in my class talked about [it] and teased me and it kind of scarred me. After that, I started wearing twists and stretching my texture. The rest is history.”

And while Beharie has come a long way from toiling with her texture, her relationship with her hair continues to evolve. Find out more about her journey ahead.

Have you ever felt that as a Black woman in the industry you had to wear your hair a certain way?

“I think more so in the beginning, but things have really changed in the last five years. There were times when I would have wigs or weaves that would more reflect my real hair texture, and people behind the scenes would say ‘Why are you wearing this? You need a better texture.’ I was like, excuse me, but this is my texture. I've heard some things on set that were awful but they would never say it now because the awareness has shifted. I will say I don't judge characters [for their hair choices], however.

“So some with characters — for example there's a character I'm working on now — I feel like she would have her hair straightened because of the way that she moves in the world and the way that she sees herself, you know what I mean? So it's fun to switch it up and I'm glad I have wigs. Almost anytime you’ve seen my hair straight on screen, it’s a wig. The most I’ll do to my own hair is maybe straighten my edges.

“The narrative around natural hair has really changed even beyond just entertainment, though. I was walking down the street in Atlanta and there was a young girl who had her hair in twists and you could tell it was her natural hair. She looked so cute and confident and you could tell the boys were checking her out. Growing up, it was the girls with straight hair down their back getting that attention.”

“Oh y'all haven't even seen half of the pictures of the hairstyles I’ve tried. Back in the day I would just go to my braider in Brooklyn with pictures from Eritrean and Ethiopian women with these beautiful braiding patterns. I used to have the most beautiful cornrows with my natural hair. Then recently, I cut my hair again and colored it — I cut my locs off. It was like a four inch afro kind of thing. Now I’m growing it back. My hair is really a lot of fun.”

What usually inspires a hair switch-up?

“Well first, I'm not a day-by-day kind of hair girl. If I'm working, I’ll probably do some sort of really pretty protective style that way I can easily throw on any wig or hair piece without bothering my real hair. But when I’m not working, I realized that I love a good twist out. I also do like these little afro puffs and the occasional blowout when I feel like it. I like to play around. Last year I actually grew my hair out quite a bit so I was able to try even more.”

Has there ever been a time that you tried something and felt like, ‘Okay, this was an epic fail?’

“I got a natural cut once and I hated how they shaped it up in the back. But you know, there's nothing you can do when you cut it that low — you just have to wait for it to grow and then you can put some braids in it or something. But then again, it was kind of a blessing being an artist at the same time because I saw my face differently. I was like, ‘Oh, I can play this kind of character.’ I didn’t feel my most glamorous, but it was really interesting what I learned. There's always some revelation in seeing yourself differently and if you can embrace it, then you can learn a lot from it.”

So I'm sure that you've also tried plenty of products then with all these hair changes. Do you have any favorites?

“Actually, I have very sensitive skin so I mix my own stuff. I have a garden and I'll make rice water and use chia, olive oil, and my own essential oils. I also like to use aloe vera straight out the plant. It’s really self-loving, and I really recommend if you have the time and resources to do it. You can keep it for a few months, label it, and store it away. I started doing this because I would look at the ingredients that worked for me in some of the products that I liked, and then just started buying them and fixing them myself.

“Nowadays so many things have preservatives in it and I think our hair is happier when we don’t expose it to chemicals. I feel like if there's anything that they advise against using while pregnant, it’s probably not that great for you at all.”

You mentioned self-love, and for us as Black women, hair is so much more than just aesthetics. What is your emotional relationship like with your hair?

“It's been challenging not seeing the representation for it. In the beginning, I thought that my texture was like so unmanageable and so coarse, but I’ve realized I have very manageable hair. Yes, it’s 4C but with just the slightest bit of love and attention, it does everything that I want it to do. It's this crazy ashy, weird color but I love it. My relationship with my hair is just like my relationship with my body — it’s ever-changing.”