His transparency is refreshing. 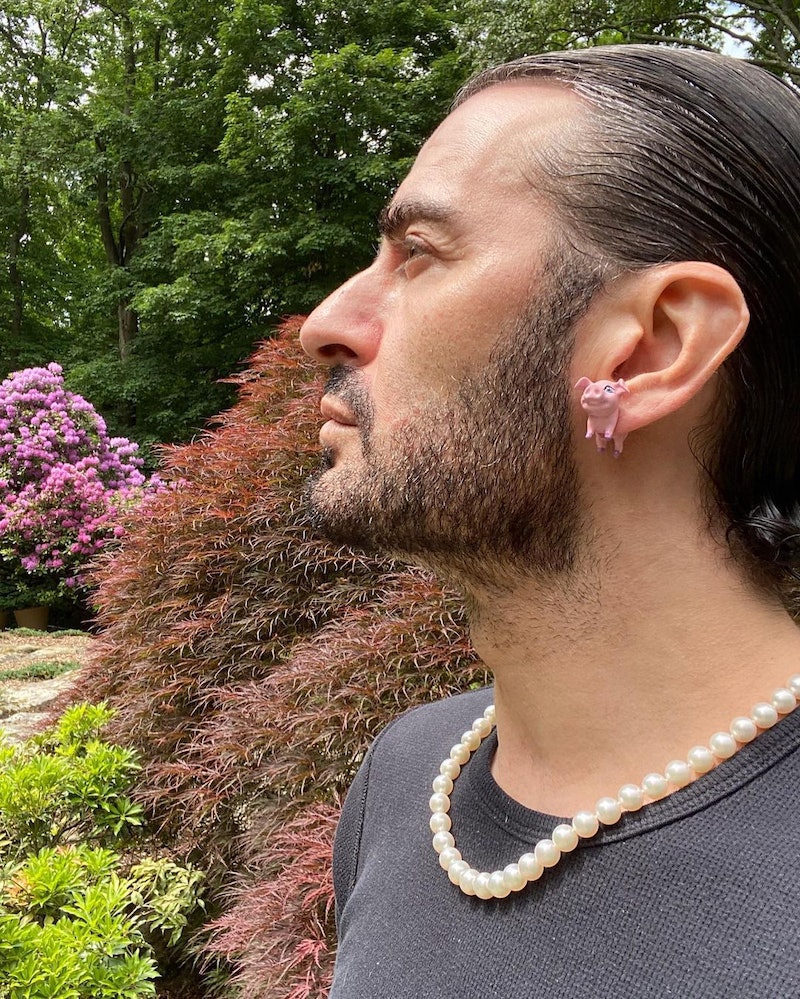 The beauty industry is fraught with mixed messages, but the undercurrent is unfailingly consistent — younger, tighter, higher, and brighter is better. There is clearly a reason that the anti-aging market is expected to hit a $421.4 billion valuation by 2030. The kicker is that no matter how much time, money, and effort you put into appearing eternally youthful, everyone gets older, plain and simple. It’s the great equalizer, and it certainly brings me some sense of comfort to know that around the world, there are millions of other 30-somethings peering into their mirror, wondering how and when that new gray hair sprouted, or that wrinkle appeared.

Today, fashion juggernaut Marc Jacobs gave us a glimpse into his own relationship with aging with an unflinchingly honest (and some may say graphic) selfie. In it, he sports the requisite face mask and appears to be in a medical center of some kind. Around his head is a cocoon of gauze, with two drainage pumps connected to his head somewhere within, and blood-tinged fluid collecting in the medical-looking plastic bags. The caption says simply “Yesterday” with hashtags #LiveLoveLift and #f*ckgravity.

It doesn’t take a seasoned beauty editor to understand that Jacobs is broadcasting to his 1.6 million followers that he recently had a facelift, a cosmetic procedure that is so shrouded in secrecy and discussed so rarely (and in hushed tones) that I can think of fewer than five people, much less celebrities, who have shared that information with the public. Yet, according to the 2020 Plastic Surgery Report, 234,374 people in the U.S. underwent the procedure in 2020 (and that’s during a worldwide pandemic). Clearly, the interest is there — so why aren’t we talking about it? And why does the image of an iconic American designer posting a post-op photo feel so brazen and yet so significant? Well, it’s all about transparency.

I’ve been a fan of what I like to call “radical transparency” for a while now — anyone who knows me understands that I have zero shame surrounding my filler or Botox injections. Despite the fact that the smoothness and fullness of my face says to the world that I am a spry, youthful young woman, I don’t want anyone to assume that I look this way because of just genetics or luck. Realistic expectations are a healthy way to live life in general, and can apply to everything from your career to your relationship — it just so happens that the thorny business of “looking good” is deeply, darkly personal, while also simultaneously being the literal exterior of who you are as a living breathing individual on earth. Is it the most important thing? One hundred percent it is not. But the beauty industry wouldn’t have that billion dollar valuation if we didn’t value it collectively.

So when an undeniably famous person showcases a blatant display of honesty about something that is so taboo and intertwined with the cold hard facts of aging, it touches a cord. Because the message until now for everyone (mostly women) is that if you must age, do it quietly, in the shadows, where not as many people can see you. Jacobs has never done anything quietly, and I’m not at all surprised to see now that he will not be hiding his choices about how he wants to age from anyone.

On the contrary, it’s a reclamation of power, proving to his legions of fans that, yes, he knows he is a 58-year-old man. Yes, he has the resources to undergo an expensive elective surgery to fight the effects of gravity (the greatest equalizer of all). No, he does not care if you think that’s vain, or shallow, or any of the other insults less confident people are prone to throw around when the topic of plastic surgery enters the chat.

For a process that will touch each and every one of our lives (and, of course, be the eventual end of it altogether), and as the population stays older, longer (the average life expectancy in the U.S. is 78.7 years, according to the CDC) the conversation around aging cannot afford to remain so stigmatized. Does that mean everyone should run out, get a facelift, and then broadcast it to the world? Of course not. But if we weren’t so afraid to talk about our fears and choices surrounding it, maybe we would all feel a little less alone watching the years steadily tick by.

Until then, I know that I’ll be eagerly tuning in to see Jacobs’ eventual healed selfie and saying to myself, “Damn, I hope I can look half as good him when I’m in my 50s.” Or, more importantly, I want to feel as unabashedly content with my choices, and beholden to no one to justify them. Age before beauty? I, like Jacobs, intend to have both.