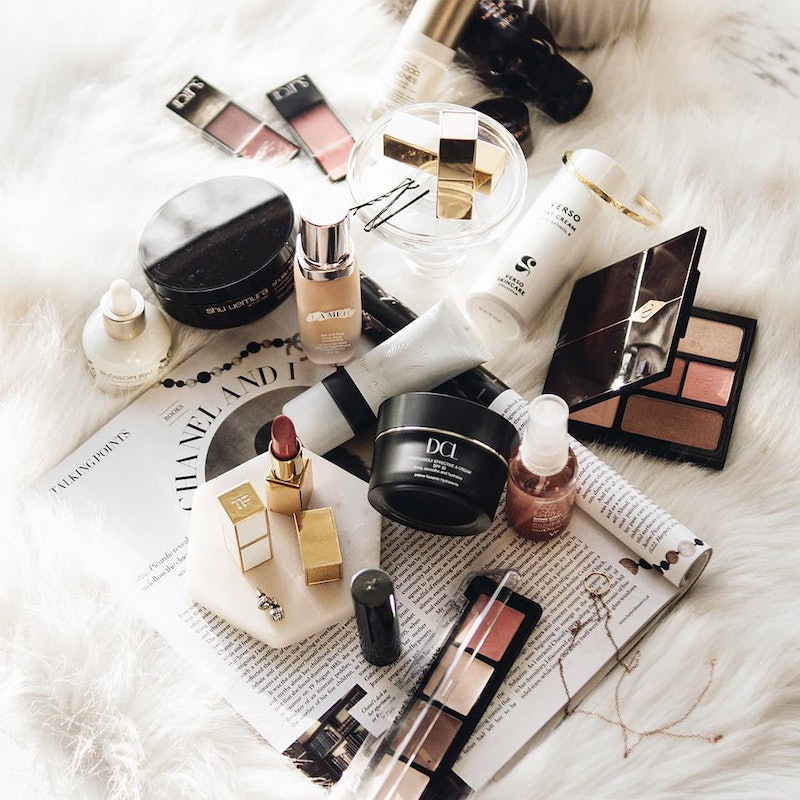 Goodbyes are hard—especially when they involve expensive, half-used beauty products that have been sitting at the bottom of your makeup drawer for who knows how long. Everyone’s guilty of holding onto makeup and skincare products longer than they should (like that once-used purple lip gloss that perfected your Halloween costume circa 2015). In the new year, however, it’s time to say out with the old for the sake of your skin, hair and body.

Using dated or expired products isn’t just gross, it can also be harmful. Bacteria breeds like crazy in dark, damp places, which means makeup tubes and product bottles are basically Disneyland for micro-organisms. Worse still? The longer you let the containers sit, the more those teeny tiny microbes reproduce. So, by the time you go to apply your mascara, body wash or moisturizer, you could potentially be slathering yourself with bacteria.

“The clock starts the moment you open the product,” says Erin Williams, founder of Erin’s Faces. “It doesn’t matter how much or how little you actually use something.” Though the time you should keep each product varies, when you get home and crack open that new face cream, body oil or lip gloss, Erin suggests writing the date on a sticker or on the bottle itself, so you’ll know when it’s time to toss it.

Here, compound pharmacist Janis Covey of Kosmatology breaks down exactly how long you should hang on to every beauty product in your bathroom. Consider this your excuse to toss all the items holding you back from a fresh start in 2018.

Mascara and liquid or gel eyeliner: After three or four months

Every time you apply eye makeup, you introduce bacteria to the wand or brush from your lashes and lids, which then goes back into the bottle when you close it. Even worse? Poor lid hygiene—aka using gunky old makeup—can introduce tiny, microscopic mites (as in: bugs) that live on your lashes and make your eyes itch. Summer 2017 mascara, meet the trash bin.

Lipstick and balm: After one year

If you’ve somehow held onto a lip product for an entire year without losing it, first, congratulations! Now, it’s time to say goodbye. Just think about the germs you’ve introduced to it several times a day.

Liquid foundation: After one year

Even though foundation is technically okay to keep around for a full year, there are some stipulations to ensure it doesn’t get funky on you. First, store it away from direct heat (so no, do not place your makeup tray by a window in the summer). Also, always use a brush or a sponge to remove it from a pot so that your dirty, bacteria-laden fingertips don’t contaminate the formula.

Powder products are generally less grimy than the liquid stuff, since the lack of moisture makes it harder for bacteria to thrive. Hang onto your favorites for up to two years, but ditch ’em if they start to develop any weird smells. And be conscious of regularly cleaning the brushes you use to apply them, so you aren’t constantly swiping dirty bristles over them and then onto your face.

Skincare Cleansers: After one year You should be washing your face regularly enough (at least every night if not morning and night). Even if you like to switch between a few formulas (like a cream in the am and oil at night), this timeline shouldn’t be a problem to follow through on. Serums: After six months In what may be the most annoying news ever (because: $$$), swap out your serums at least twice a year. This is because the water-based formulas can be a haven for bacteria. Plus, the major doses of active ingredients are likely to start to break down. Especially if they contain vitamin C, which is known to be a stellar skin protector but unstable. For more info, check out this super simple guide on how to tell if your C serum has gone bad. Moisturizers: After six months to one year If you’re working with a water-based moisturizer, it’s best to say goodbye after just six months (they’re more likely to spoil because of the high concentration of H2O, which again is a bacteria-happy playground). If your go-to is oil-based, though, it’s okay to hold onto it for a year (bacteria can’t breed as easily in oil). Keep in mind though, if it does contain essential oils, they can start to degrade more quickly, so keep an eye (or better yet, a nose) out for any questionable changes in smell. Body lotion: After six months to two yearsThere’s no one-size-fits-all scenario for lotion—it totally depends on what you’re working with. Many traditional lotions are fine to keep for up to two years. Keep oil-only products with no water for up to 18 months. Shower products Body wash: After six months Considering your body wash is what makes you clean, you want to make sure it stays clean, too. Because it’s sitting in the shower and subject to major temperature changes, including super-high heat, this one is a bacteria haven. If you somehow don’t manage to get through an entire bottle in less than six months, ditch it and start fresh at least twice a year. Scrubs: After six months A word of advice for scrub storage: Keep them out of the shower, especially if they’re packaged in a tub or jar. Although clearly not ideal (because you’re probably lucky if you remember to use the scrub even when it’s staring you in the face), any water that gets inside can decrease life expectancy, or worse, have you scrubbing away your dead skin with some extra-gnarly bacteria. (Gross.) Shampoo and conditioner: After two to three years Consider this your latest excuse for only washing your hair once a week. By lining your shower shelf with a slew of all your favorite shampoos and conditioners, you’re likely introducing some amount of water into those bottles. The result: The more moisture, the more appealing it is to bacteria, so make sure to keep them closed when you’re not using them.

This article was originally published on Well + Good.

These Are The 6 Products To Use Before Bed, According To Dermatologists