It's eight years in the making. 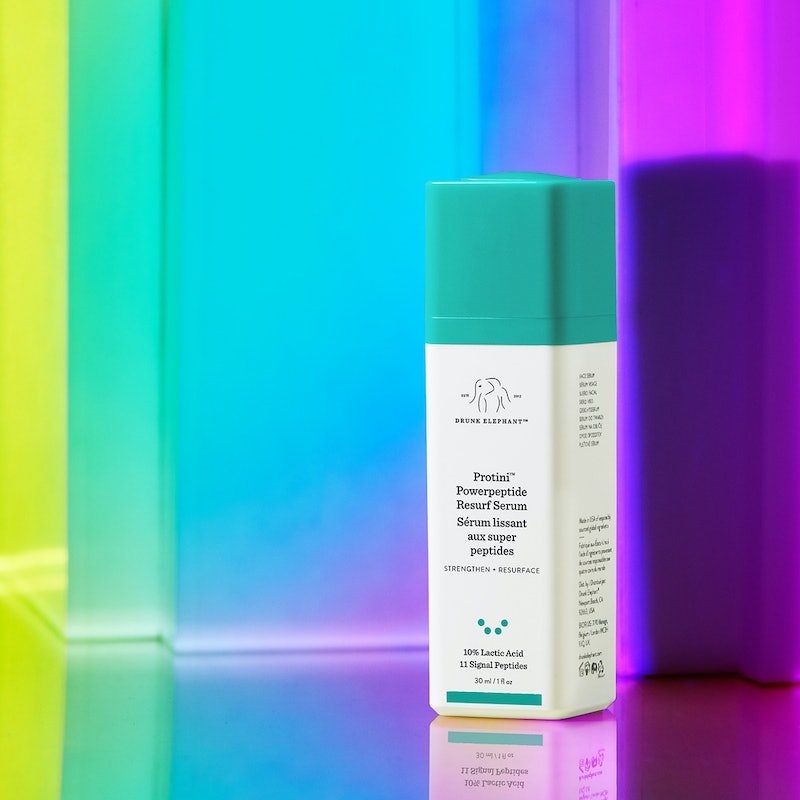 News of any Drunk Elephant launch is exciting to a skin care obsessive — but news of the brand's first new serum since the company first launched: major. The good news? It's happening soon. Today, Drunk Elephant announced its upcoming launch, the Protini Powerpeptide Resurf Serum, would be hitting shelves next month. If "Protini" sounds familiar, you're likely already a fan of the label's lightweight moisturizer — the Protini Polypeptide Cream — which is also packed with peptides.

Peptides are not the only hero in this powerful new serum though. It also utilizes lactic acid and growth factors, making it, a great option for everyone, according to Drunk Elephant founder Tiffany Masterson. Lactic acid is an alpha hydroxy acid (AHA) though it's a lot gentler than others. It also hydrates while providing chemical exfoliation. "This is due to its larger molecular size — larger than glycolic acid, for example — which means it doesn’t penetrate as deeply, and its exfoliation isn’t as intense," Masterson explains. "At a 10% concentration, lactic acid can help strengthen and improve skin’s ability to keep itself hydrated, increase ceramide synthesis within the skin barrier, boost healthy collagen production, and improve both uneven texture and tone," she says.

As for the other hero ingredients, Masterson explains, "we started with the same 9-peptide and plant-growth factor blend that we used in the Protini Cream, then added two more signal peptides, and then almost doubled the overall concentration, making it almost twice as powerful as the Protini Cream in terms of the plumping, skin-strengthening, and firming benefits."

Finally, rounding out the formula, there's also antioxidant-rich plant oils (green tea seed oil, marula, and borage), snow mushroom, a natural ingredient that draws in moisture like hyaluronic acid does, and amino acids — all of which, Masterson notes, contribute to the formula being hydrating as well.

OK, but what do they actually do? According to Masterson, "As a category of ingredients, peptides are 'cell-communicating,' which means that they help to trigger healthy collagen production from the deeper layers while also supplying skin cells with the tools they need to act healthier and do their job more effectively." Furthermore, she explains, "some of the peptides that our Protini products contain are also plant-derived growth factors, which means they are designed to (in part or whole) mimic the function of human peptides," she notes, explaining that "when used topically, growth factor ingredients like those contained in Protini help facilitate healthy cell turnover and development, but do not upset or influence the balance of healthy, normal cell production in any way."

The serum can be used day and night (just don't forget SPF in the morning), and can even be cocktailed with many other Drunk Elephant favorites. Masterson notes that mixing it with C-Firma, Drunk Elephant's vitamin C serum will "dramatically boost the skin-brightening, collagen-strengthening benefits of your routine."

As for the overall results, you can look for increased radiance, smoother, and softer skin in the short term, because "Protini Powerpeptide breaks down and dissolves dead cells while improving hydration levels and calming redness." In the long term, though, "Protini’s blend of peptides, amino acids, and 10% lactic acid will work together to boost healthy collagen and skin cell production, which means stronger, firmer skin, as well as improving the appearance of more stubborn discolorations (sun damage, for example)," Masterson explains.

As with all of the products in the collection, the company put its new serum through clinical testing. It found that, when used daily, after 8 weeks, 96.8% noticed an improvement in the overall texture of skin (smoother, softer), 90.3% said their skin felt calmer and more soothed, 80.6% said their skin firmness and elasticity was improved, 90.3% felt their skin was more hydrated, and 87.6% said their skin tone/discolorations had improved. "Needless to say, we are incredibly excited about the clinical results of Protini Powerpeptide, and can’t wait to share it with our community," Masterson says.