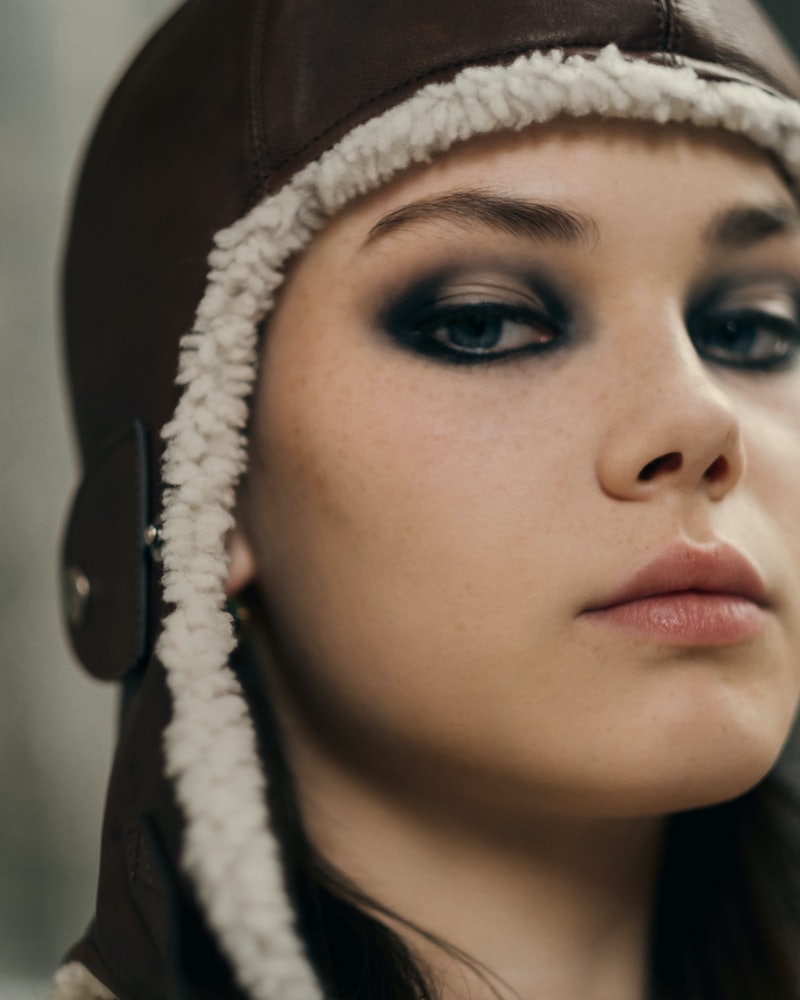 There are few brands that understand the nuances of a smokey eye better than Dior Beauty. Mastering the intricacies of this look — and ensuring that even the darkest of lids appear soft — is a skill that not many makeup artists possess. Peter Philips, however, certainly does. That proved true at Dior Fall/Winter 2021, where the brand unveiled an artistic spin on a traditional dark, diffused eye, using a selection of the brand’s cult-favorite products, as well as a few new ones, including a limited edition eyeshadow that launches in May.

Creating that dynamic started with the eye, which needed a smooth base for the subsequent shadow. Philips and his team used the new Capture Totale Super Potent Eye Serum on all the models in the show. From there, he gave attention to the rest of the eye area using two vastly different finishes. “I used the new Mono Couleur Couture shade in Black Bow,” Philips says. “It's a matte black,” he says. “But first, I created an outline in the crease with the Diorshow 24h Stylo. I framed totally around the eye, and before it dried in, I just blended out the edges with a Q-tip to make sure that it's not as a graphic of a line, but more of a blended out line. That line ended up being the base for my lashes.”

After applying the shadow base at the edge of the lashes, Philips decided to skip mascara altogether, explaining that “the smokey eye becomes almost too sexy. But when you take away, the mascara it becomes more of a conceptual eye. With mascara it’s almost too seductive, which is something you want to try to avoid considering the concept of the [show].”

To further dramatize the eyelid crease, and minimize the need for the definition that mascara usually provides, he buffed out the black line with the shadow. “Once that was done, I took a soft brush and blended it out,” he says. “I blended it up into the crease, creating a ‘highlight’ with the natural skin tone.” To further define the eye, he buffed the shadow under the eye to create a continuous line under the lower lashes. This continuous line of pigment — coupled with the lack of shadow on the center of the lid — created a mesmerizing optical illusion, shape shifting slightly depending on the angle of the eye.

Says Philips, “Once the models change their position and blink, you see the little highlight created by the natural skin tone.,” he says. “The shape was a bit blunt, but not too square. Actually it was bit like a rectangle. “

And while there was of course a lot of attention paid to the eyes, Philips did not neglect the skin. “We just wanted to get a little more of a harmonious effect,” he says over the overall look, which was neither too glossy or too matte. To create that, he used another new product, the Backstage Powder-no-Powder. “It's a patented formula and it’s gel-based,” he says. “So it's a formula that can be used as a powder foundation, as a bronzer, and as a setting powder, especially on the T-zone. It made sure that the foundation stayed put all-day-long.” Coupled with a subtle nude lip, it was a refreshing take on the classic smokey eye for the season ahead.