The origin story of the trendy wellness brand. 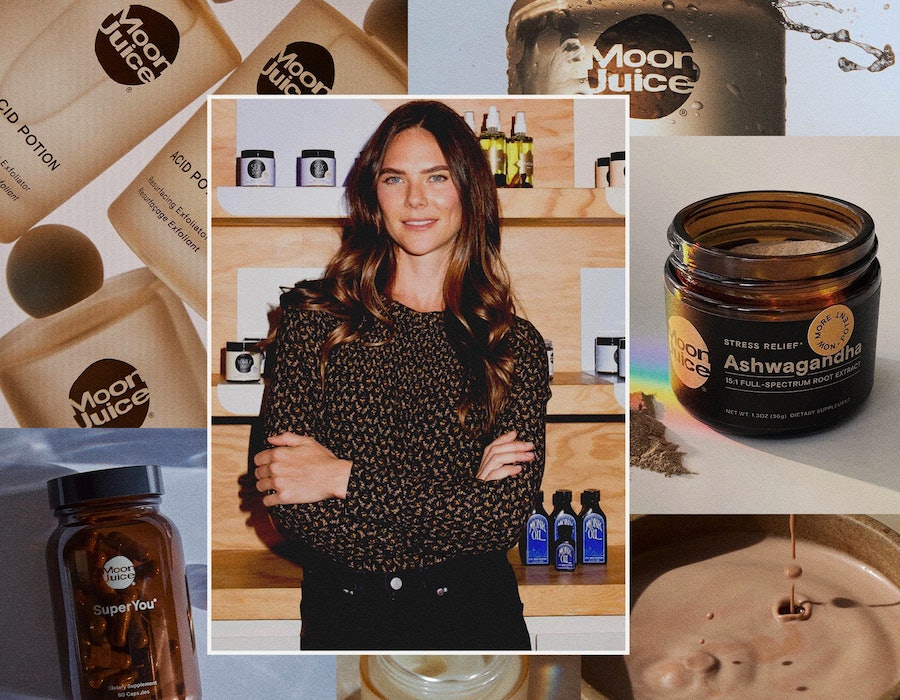 As I prepped for my Zoom call with Moon Juice founder Amanda Chantal Bacon, I pictured her fresh out of a Pilates class clad in chic workout attire, makeup-free, hair tossed on top of her head in an intentional messy bun, and (of course) clutching a green juice. As a Los Angeles dweller, perhaps this is the vision of health that’s been engrained in my mind over the past decade or so. However, as I hopped into our virtual meeting space I was met with a bright-eyed woman (with impeccably mascara-ed lashes) donning a bubble-gum pink prairie dress with balloon sleeves and perfectly imperfect disheveled waves often seen on the likes of Gigi Hadid and Emily Ratajkwoski.

As the woman at the helm of a rapidly growing wellness company known for its candy-colored branding and good-for-you concoctions like Adaptogenic Matcha Latte powder, Raw & Activated Mulberry Overnight Oats, maybe the ethereal-looking Bacon that greeted me was exactly who I should’ve expected. Or maybe not. As the health and wellness space continues its meteoric rise, the ways in which one embraces the concept is not so black and white, Bacon explains to me. “I don’t think that wellness means, like, Oh, if you’ve declared yourself to be a beauty-from-within person, that’s who you are, that is your name tag,” she explains. “That you can never touch a laser or toxic mascara ever again in your life. I think that’s like old paradigm kind of stuff. Now, there really is a beautiful gray area that we’re all swimming in and you just choose where you are. Like, who thought I would be showing up in mascara and a pink dress? Not me!” Obviously, not me either.

According to a report by market research firm Research & Markets, the global health and wellness market reached a value of $3.31 billion in 2020 and is projected to reach $4.24 billion by 2026. “I have high hopes for the future, and really I think the best thing that could happen to America is for people to heal themselves and realize how simple, basic, and kind of common sense a lot of this is,” says Bacon. “I think that healing is like religion or spirituality. There are many different paths you can take, whether it’s Ayurveda or TCM or Tibetan medicine or like wise women traditions. Whatever region you’re from, we as humans, we know how to heal.”

For Bacon, this realization did not come so easily. For years, the health guru and culinary school graduate lived with an autoimmune disease that left her feeling helpless. “I was losing faith in the diagnostic tools of allopathic doctors and starting to feel skeptical of about all the pharmaceutical prescriptions I had been put on,” recalls Bacon. “So by my early 20s, I really started to peel back the onion and asked myself some basic questions: Why am I not menstruating at all and when I do, why is it never normal? Why am I so f****** exhausted every morning when I wake up and why am I wired at 2 o’clock in the morning? Why do I have bouts of anxiety and am on the verge of low-grade depression?”

After getting a diagnosis of Hashimoto’s disease, Bacon was finally explained the ins and outs of autoimmune disease. And while the New York native had already been through a “saga of medicines” that did little to relieve her ongoing symptoms and irregularities, she finally decided to take matters into her own hands. “So one of the first things that I did was really detox my body,” explains Bacon. “I know ‘detoxifying’ is a word that’s thrown around and often a code word for losing weight quickly. But, I really went after it trying to detoxify my body from pharmaceutical drugs, from birth control. I wanted to rebuild my gut and repair my gut [...] that really was ground zero.”

In adopting a high-fat, low-sugar diet, Bacon said she was able to make major changes in her body and mood. She also began to research and test out various natural remedies to “deepen” her healing process. “Specifically, I had such a great experience with adaptogens,” recalls the female founder. “At the heart of an autoimmune condition is some type of stress and dysregulation in the body. The adaptogens were really like my bullet that came in and took this whole platform of detoxifying.”

Up to this point, Bacon had been working in fine dining and food journalism, and her personal experience was very much a departure from her day-to-day professional life. “I was making sprouted almond milk and putting ashwagandha in it and sweetening it with monk fruit and then making green juices for myself every day,” she says. “It was a full-time job. So here I am with these decadent habits that are saving my life. And I’m doing this alone in my underpants.”

Indeed these early days (that turned out to be the origins of Moon Juice) were “lonely and expensive,” leaving Bacon eager to create a more communal and public atmosphere for her newfound passion project. So she took a gamble.

“I signed the lease on this tiny little art studio on Rose Avenue [in Venice, California],” recalls the health guru. “I was like, ‘OK, I’m gonna figure this out,’ and then a week after I signed my lease I realized I was pregnant [...] Here I am trying to get this thing off the ground, I didn’t have a regular paying job, I was not in a healthy relationship that I planned on staying in and I was in my 20s and pregnant. So that was the birth of Moon Juice.”

As it turns out, the little wellness shop that could and its reluctant founder both turned out to be diamonds in the rough. In the 10 years since its inception, Moon Juice has made a name for itself (and been the center of strong public criticism) for its pricey nutrient-packed juices, fanciful adaptogenic Moon Dusts, and aesthetically pleasing packaging. And while the supplement train is well underway at present, the small Los Angeles-based operation seemingly came along early enough to attract a large following (which includes one Gwyneth Paltrow).

But then the challenge becomes retaining those initial fans, which can be difficult in an ever-growing market where buzzy new supplements and herbs pop up and go mainstream in an instant. “Here we are living in some world where you can find oat milk, almond milk, coconut milk, cashew milk, and hazelnut milk on any continent, you can probably have all that stuff on an airplane at this point,” says Bacon of the heavily evolved wellness space which has turned many — as opposed to a dedicated few — into ingredient-savvy health nuts.

And because Bacon has no medical background or even certification, she relies heavily on her board of medical doctors to keep her in the know. “They are incredible geniuses,” she says. “They’ve seen what’s happened with Moon Juice and they understand where I’m coming from. They really will speak to me almost as a colleague so I feel as if there’s some type of mentorship there.” They also serve as the eyes and ears of all the goings on within the health world, adds Bacon to help her stay on the cutting edge of industry. “I’ll get like a little tip off. They’ll say, ‘We’re seeing this work being done with these labs and this is pretty interesting. Why don’t we get you on it and see what happens.’ So a lot of the stuff I’m actually picking for myself and I’m going through it with a doctor.”

The entrepreneur explains that much of Moon Juice’s ever-expanding product line (which now includes capsulated supplements and skin care) is a result of her own curiosity. “One layer of it is just experimenting on myself,” says the businesswoman. “It’s never ending. I don’t think I’ve ever had a moment like, ‘OK, I guess I’m well now.’ It’s actually a passion and a hobby and there’s always something to take care of.”

And despite its now-wide-ranging product line, three Los Angeles storefronts, and not-so-far-off plans to go international (the brand will be sold in select retailers in Canada and Australia later this year), Moon Juice is and always will be about prioritizing one’s health from a holistic standpoint — with a dash of marketable packaging and cheeky product names. “It’s the same mission,” says Bacon. “The mission has always been to highlight the fun and the pleasure in pretty basic healing practices you can do for yourself and to educate people on these incredible traditions. We try to bring that wisdom and drop it into some pop culture moments for people to consider.”