Corinne Foxx On Meditation & How It Helped With Her Anxiety

The actor talks all things self-care. 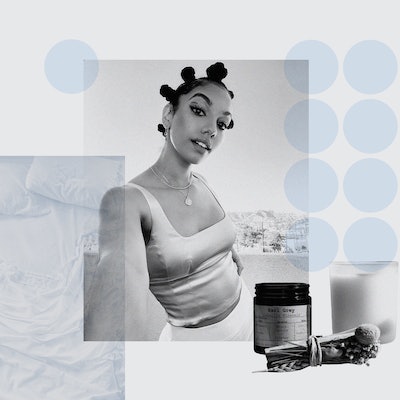 Routine Check is our series that dives into the nightly rituals of celebrities, tastemakers, and industry leaders. From overnight masks to meditation before bed, TZR reveals how each person takes care of themselves underneath those layers. Our first edition is with actor and producer Corinne Foxx.

Corinne Foxx has a busy schedule. As an actor, writer, podcast host, and most recently, producer for the Netflix series Dad Stop Embarrassing Me, Foxx isn’t interested in sticking to one job title. In fact, her goal is just the opposite. With big ambitions, the 27-year-old is set on building a multi-hyphenate career and exploring opportunities where her creative flow takes her. Foxx is always coming up with ideas, but at night, that can mean an overactive mind, which is not the most conducive to sleep. To decompress and ensure a good night’s rest, Foxx practices meditation and establishes boundaries between work time and personal time.

As someone who considers herself “pretty Type A,” the California native organizes her day by work, transition, and rest periods. She created a nighttime routine, with instructions hour by hour, to guide her: “At this hour you’re done with work; you cannot answer emails anymore. At this time is your decompression time, 10 o’clock phone away, and 10:30 you’re in bed.” This method provides straightforward, simple tasks, and upon every completion, marks a small win — which can be motivation to move on to the next.

Developing a set bed time and transition period came about during quarantine, as Foxx, like many others, found herself working around the clock, especially given that her home was now her office. But, what is not new is the appreciation and value given to the act of self-care. At the age of 14, Foxx was diagnosed with an anxiety disorder, and early on, the self-aware teen was thinking about ways to take care of her mental health. “At that time, probably more than most 14-year-olds, I was thinking about what was going to calm and relax me, and what was going to make me feel good. So I feel like it was a learned behavior before self-care became this trendy word that’s on sweatshirts and T-shirts and became its own little thing.” In 2016, Foxx partnered with the National Alliance on Mental Illness, serving as an ambassador to destigmatize mental illness.

The mental health advocate reveals to TZR in an exclusive video the secrets to her nightly routine, the power of meditation and breath work, and the surprising hobby she picked up during quarantine.