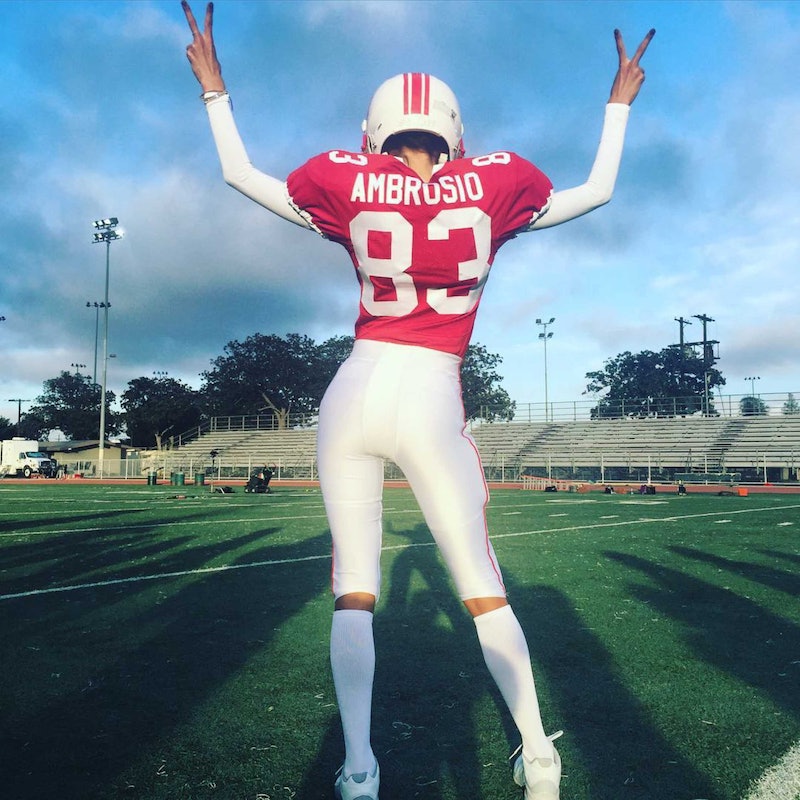 Super Bowl 50 was one for the books: Beyoncé crushed halftime, Helen Mirren made a beer commercial, and the Broncos won (in case you somehow missed that). Amidst it all, A-listers of all stripes took to social media to share their snaps from the festivities. Here are some of the game’s biggest moments—from the field, the stage, and behind the scenes.

Wearing a red Gucci suit and mismatched Gucci heels paired with blue nails and red eyeshadow, Gaga delivered one of the most stirring renditions of "The National Anthem" in recent history. Watch her performance here.

24 hours before halftime, Chris Martin previewed his moves on Instagram.

Alessandra Ambrosio Motivated The Players With A Pregame Instagram...

...and motivated us to get to the gym.

British-born David Beckham spent QT with his son in the most American of ways.

The North Carolina native showed support for her home team.

Including Nina Dobrev and Joe Jonas.

The varsity trend has officially reached its peak.

Bruno Mars Showed Up With A Smile

Two days before the event, Mars took to social media to express his pre-performance excitement.

Kourtney Kardashian Celebrated With A #TBT

It's only a matter of time before they take over the Super Bowl halftime show.

She paid homage to Michael Jackson and the Black Panthers, she danced so hard she nearly toppled over, and she announced a new world tour. We almost feel sorry for Coldplay, who were basically robbed of their place in Super Bowl history by Beyoncé's genius.

Helen Mirren Made A Beer Commercial

It was a stroke of brilliance to have Helen Mirren lecture wasted Super Bowl viewers about drunk driving. Watch the commercial here.

We Learned What A "Puppy Monkey Baby" Is...

...and we weren't sure we liked it. Watch the commercial here.

Alicia Keys Snacked With Her Son

That is one cute kid.

The Avocados from Mexico commercial made us laugh out loud, which is more we can say for some of the other ads. "This is Scott Baio" = genius. Watch the commercial here.

Moguls in the making.

The NFL Made Us Feel Weird

We never really thought of the Super Bowl this way, nor did we need to. Watch the commercial here.