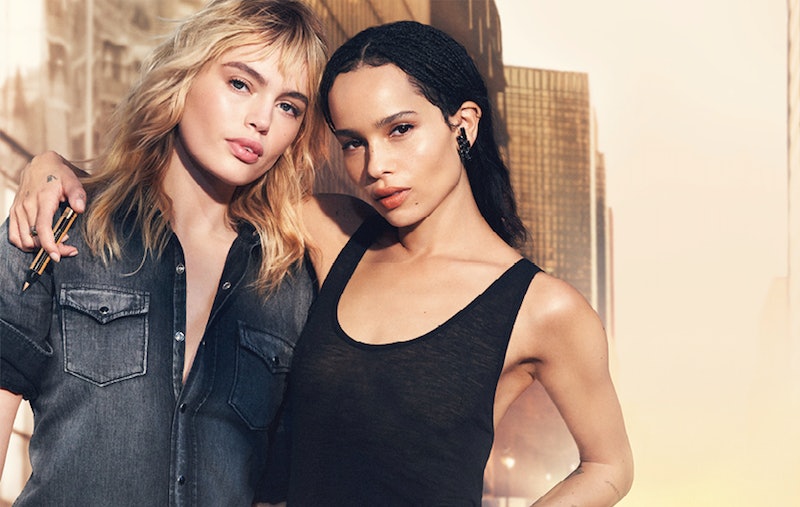 You know how the old saying goes: If it ain't broke, don't fix it. And YSL Beauty's Touche Éclat All-Over Brightening Pen definitely wasn't broken. A standard since 1992, the cult-classic highlighter and concealer has thousands of fans (and perfect reviews at Sephora). Victoria Beckham has used it, Meghan Markle has shouted it out. So why would YSL Beauty debut the new Touche Éclat High Cover Radiant Concealer when the original brightening formula hasn't been altered since the '90s? You have to take a look at the specifics of the cult-favorite versus the new formula — because both will achieve different looks.

And beauty fans don't need to grab their pitchforks: The original Touche Éclat All-Over Brightening Pen isn't going anywhere. However, if you've used the formula — or have looked into the illuminator's uses — you'll understand why YSL Beauty would add another Touche Éclat product into the line. It's been long-debated if the Touche Éclat pen even is a concealer; the highlighting formula is pigmented and creamy, and has been touted as an under-eye bag-banisher, but your mileage may vary when using the product that way.

"Original Touche Éclat is an amazing formula that is still best used over concealer to bring light to any shadowed area of the face," YSL National Makeup Artist Dell Ashley tells The Zoe Report in an email. "However, the new Touche Éclat High Coverage is going to give you the ability to cover dark circles much more effectively without creasing like most traditional concealers."

The $35 concealer comes in 16 shades, and promises to hide and smooth dark circles, spots, and scars. "The added care ingredients such as vitamin E and hyaluronic acid are what allow Touche Éclat High Cover to offer high coverage while still smoothing," Ashley says. "Caffeine and calendula help banish inflammation, particularly around the eyes."

The makeup artist also notes that Touche Éclat High Cover will take the hard work of color-correcting dark circles out of the equation, as well. "With Touche Éclat High Cover there is no need to color correct because [it] naturally color corrects by having a peach or pink base. Just pick the shade that is the closest match your skin and watch darkness or imperfections completely disappear," Ashley notes.

On top of the new concealer, YSL Beauty added the Touche Éclat Shimmer Sticks to the radiance-boosting line, too. Unlike the original, glitter-free Touche Éclat, the $34 highlighter has a metallic shimmer. Additionally, the cream-to-powder stick is versatile. "The Touche Éclat Shimmer Sticks are great applied directly to the face on the cheekbone or high planes of the face," Ashley explains. "You can also apply it more precisely to specific areas, such as the bridge of the nose, under the brow, or on the Cupid's bow, with a small eyeshadow brush in a swirling motion."

Looking for your perfect springtime glow? Both new YSL Beauty products will officially launch in-store and at YSL Beauty's retail distributors in March 2019.