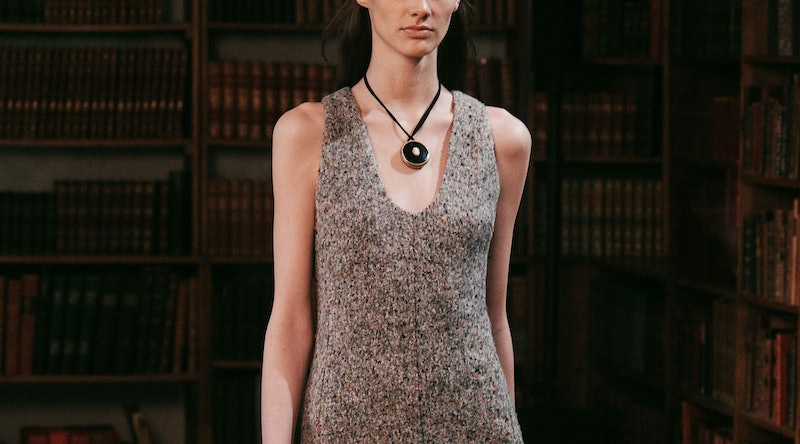 "There’s something very similar about books that also goes into the craft of clothes," Marina Moscone, a New York City-based designer tells TZR at her sun-drenched Chelsea atelier. "It’s the pagination, curating the layout, binding, finishing, cover, illustration — it’s comparable to making a collection." The designer draws this analogy a week ahead of her Fall/Winter 2019 presentation, which was held Feb. 9 in the rare book room at New York's famed Strand Book Store. She's wearing a crisp white button-down alongside racks of oversized blazers and tailored trousers cut from Italian silks, thread-embroidered dresses, and hand-twisted bustiers in relaxed silhouettes — all sleek separates that speak to the label’s artfully chic aesthetic. Her sister and co-founder, Francesca, sits next to her and before we dive in I feel a gentle, cold lick on my ankle. "Oh, that's Gia!" A golden French bulldog is peering up with calm curiosity before she makes her way to a quieter corner of the room.

The Marina Moscone woman for F/W 19 is one who is both practical and progressive. Outerwear stole the show. Long wool coats in streamlined silhouettes were layered over wide-leg corduroy slacks and silky slip dresses in burnt hues of green, yellow, and orange. The blazers remained oversized yet tailored and a small handful of dresses were emblazoned with an abstract painterly print that gave the collection of looks an anchoring pop of color. Layering combinations like tunics over slacks and sleeveless bustiers with slip skirts helped maintain the feminine-meets-masculine ethos of the brand. The accessories were also worth mentioning; she launched her first collection of them just last season. For autumn, you’ll find sturdy silver necklaces with enlarged cameo pendants. Textured pillow bags were tucked under the models' arms and for footwear, there was an exquisite mix of flat and heeled leather boots that reached mid-shin and up to the knee. The amalgamation felt like an homage to the "undone flawlessness" which will reliably bode well with the modern woman looking for clothing that fits seamlessly within the context of her life — whatever that may look like.

"We grew up with a profusion of culture around us," says Moscone, a first-generation Canadian born to an Italian father and South African mother. "I think back and everything we did was some kind of art. Whether it was traveling to our parents' homelands or cooking or eating or going to Roman ruins or watching elephants meander through the jungle in South Africa — it was all art and really shaped what I do and who we are now." The two founded the company in 2016, and prior to that, Marina, a Parsons grad, worked at Peter Som. After her time with the British designer, she launched her own label with Francesca, who has a background in business.

All of the materials Moscone uses are sourced from Italy and she develops the collections' fabrics with family-run mills in Italy that have been in business for generations. There are detailed elements like twisting and draping by hand, custom jacquards, fil-coupés, undone raw edges, silk wools, and the ilk — and it shows. "There’s always been a massive commitment to quality and craft and showing the relationship between the material and the craft," she continues.

While Marina Moscone's spring collection included exploded proportions, precise tailoring, and Italian shirting (as well as those beloved feminine hand twisted details), for the latest show, there's a continuation of these motifs. "It's a bit of this '40s and '90s," Marina says walking over to her moodboard against the wall. "I love a Carolyn Bessette moment. It's this easy elegant undone sort of flawlessness and there’s such perfection in the imperfection," she says. Pinned onto the board is a cutout of a painting from Hilma af Klint's childhood series. It's unmistakable with its youthful shapes and brilliant pops of powdery hues; The Guggenheim's exhibition on the artist's body of work is currently on display. "What I love is that nobody knew who she was and you look at those pieces and they're relevant right now," Marina says. "That goes back to the woman who is sort of this brand. She's progressive; you put her in context anywhere and it's relevant."

Marina cites the women who surround her as pillars of inspiration. "It doesn’t have to come from this elusive idea of someone or someone who’s not here anymore or who is super famous," she says. "I’m lucky to be surrounded by so many women in several industries. They’re educated, they’re intelligent, they’re curious, they’re artists, they’re bankers, they’re mothers — everyone.”

Ahead: The Best Looks From Marina Moscone's F/W 19 Collection