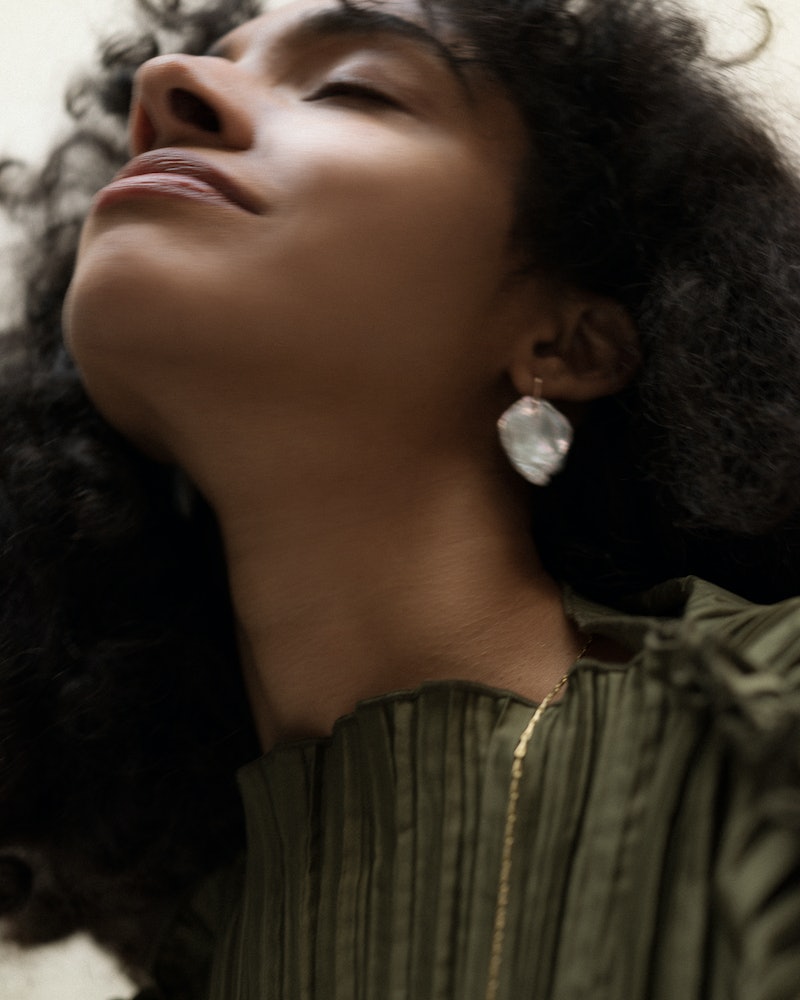 Regardless of their area of expertise, any designer has a primary goal: to create beautiful pieces that resonate with their audience. For those who wear the designs fashion is an outward expression of identity, but for those who create them, it’s not only a form of art, but also an area to release their creative energy. For Khadijah Fulton, the owner of the jewelry brand WHITE/SPACE, the artistic element is what continues to drive her passion.

Fulton originally began designing jewelry as a hobby, while she was also designing larger fashion corporations in Los Angeles and New York. After she had her first child, she chose not to go back to her established work right away and picked up designing as a way to get back into the practice as well as to rediscover herself as a new mother. “I loved that I could create something with my hands and give it life not only through the process of making, but then having someone wear it and express themselves individually,” she tells The Zoe Report in an email. “It was the same thing I’d gotten into fashion for, but on a much smaller ... and potentially more meaningful, as jewelry often holds strong sentiments ... scale.”

The name of Fulton’s label references the design aspect of white space, “the open space that allows a design to have a greater impact.” The designer associates it with elegance, contemplation, and limitless possibilities. However, as Fulton notes, the term “white space” also has other meanings due to the racial dynamics of the country. “As a Black woman it has personal relevance, as I have been navigating and achieving in ‘white spaces’ for my whole life, and fine jewelry is yet another largely ‘white space,’” she says. “It’s vital that Black artists be able to create without the burden of having to make a statement about their race through their work if that is not what moves them to create…If the work of the Black artist is consistently framed within the same race-based context, does that not limit the potential of that artist’s expression from being more universally human?”

Fulton’s primary challenge as a designer in the jewelry industry has visibility and opportunity. “There are a variety of reasons Black creatives and professionals have been shut out of various industries over the years, and jewelry isn’t immune to these systemic factors and unconscious biases,” she says. “If there isn’t anyone making the buying or editorial decisions that is actively thinking about the diverse world we live in and trying to not only reflect that back to their audience, but do the right thing in terms of pushing back against historically unfair policies that affect POC’s everyday lives and opportunities, they easily skip over the businesses of color they may not have been following, money to back them, or social contacts that often drive who gets “seen” and taken seriously.”

WHITE/SPACE is known for its sleek, minimal designs — many of which reference mid-century modernism, ancient African and Greek goldsmiths, and other constant inspirations of Fulton’s. The designer shares that another concept behind the brand’s name is that its designs allow space for each wearer’s personality and beauty to shine through.

If you would like to add WHITE/SPACE into your jewelry collection, scroll down to see TZR’s must-have picks from the label below.